When one fake opposition party stops effectively distracting the Russian people, what's the Kremlin to do? Give them a new one, of course. 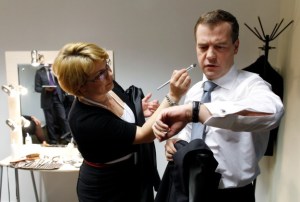 I’ve just returned to Moscow after a two-week vacation to find that, true to the Gogolian model of Russian history, lots has happened, but nothing’s changed.

In my absence, the electoral campaign has swung into high gear: Heads have rolled, others were made into official heads, still others lost their precious marbles. And yet, at the end of the two-week bonanza of firings and the first press conference of President Dmitry Medvedev’s three years in office, no one knows any more than they did before.

Let’s recap. In mid April, we heard of the sacking of Alexey Chadaev, the young chief ideologist of United Russia, Vladimir Putin’s party. Two weeks later, Gleb Pavlovsky, a “politilogist” who is often quoted here and who runs Fund for Effective Politics, a think tank that was widely seen as a Kremlin stand-in, was fired from his position as Medvedev’s volunteer political advisor. Tit-for-tat? Maybe. Significance? Unclear.

Around the same time, Sergei Mironov, speaker of the Russian Senate (the Federation Council) and head of the dummy A Just Russia party, found himself in hot water, ostensibly for criticizing his native St. Petersburg. (He said it was the most corrupt city in Russia.) In May, he was removed from his government post, and talk of dissolving his party began to circulate. It was also around this time that Putin announced the formation of the new All-Russia People’s Front, a strange amalgam of hail-Mary populism and Monty Python. Making way for a new Kremlin-made opposition party? Probably. End result? Comedy.

And then came the curve ball: On May 16, Mikhail Prokhorov, playboy billionaire and co-owner, with Jay-Z, of the New Jersey Nets, was trotted out as the man who would head another Kremlin dummy, the Just Cause Party. The names of the two parties sound similar because of an English translation glitch, and yet it’s a telling one: Both were created by the Kremlin to funnel oppositionally-minded voters away from the actual opposition. The only difference is in target demographics. A Just Russia is aimed at people sympathetic to the parties that used to be the real threat to United Russia: the Communists and the nationalist-populist Liberal Democratic Party. More recently, however, United Russia has swallowed up some of their positions, and those two parties have become loyal vassals of the Kremlin, making A Just Russia somewhat superfluous.

These days, the people alienated by the Kremlin are the ones who have done well in the market economy, the young, economically liberal, well-off middle class and elite. Given Prokhorov’s allure with this crowd — he is an internationally successful businessman who has just clocked in as the third-richest man in Russia — it seemed clear that his newly resurfaced Just Cause (a right-leaning, market-oriented party) was to be the replacement for Mironov’s A Just Russia.

Fine. But what of Medvedev’s first real presidential press conference, just two days after Prokhorov’s big news? The presser, announced well in advance with great fanfare, was eagerly anticipated by journalists: What was Medvedev was planning to say? Would he finally put an end to the agonizing guessing game and declare his candidacy? Was he going to — gasp — fire Putin?

As it turned out, none of the above. When the big day came, Medvedev talked for just over two hours about, well, nothing. He talked about television, about parking, about reindeers. When asked the question that’s been tormenting Moscow elites for months — who, for God’s sake, would “run”? — Medvedev dodged. Awkwardly. “Finally, you asked this question,” he joked, and then proceeded to discuss the nature of politics, very broadly speaking. “If I decide to make such a statement, I’ll do it,” he added, telling the journalists, confusingly, that a press conference was not the appropriate venue for such an announcement.

“This was a bit of an unfortunate performance,” Pavlovsky told me afterward. “Everyone wanted to know one thing, and he didn’t discuss it. You can’t gather the press and not talk about what they want to talk about. It angers them.” (A week out, the consensus seems to be that Medvedev wanted to show that he was not bent on confrontation with Putin. But who knows, really?)

As for his firing, Pavlovsky said he was let go because he was openly anti-tandem and had been publicly boosting Medvedev’s candidacy for months. Says Pavlovsky: “It wracked a lot of nerves at the White House,” where Putin has his office. Vladislav Surkov, the Russian Karl Rove currently serving as Medvedev’s first deputy chief of staff, “suffered for this the most,” says Pavlovsky. “I spoke with Surkov more than with anyone else, and all of my statements [about Medvedev being better for Russia than Putin] were attributed to Surkov’s intrigues.”

And Alexey Chadaev? Pavlovsky denies there’s any connection between the two firings, but according to a high-ranking United Russia source, Chadaev, a White House (i.e., Putin) ally, was let go as a lamb sacrificed to the Kremlin (i.e., Medvedev), which was made to fire Pavlovsky for offending the White House. But this explanation is probably just an attempt at saving face. More likely, it was the other way around: Chadaev (who also has made numerous FP appearances) was let go for United Russia’s relatively poor showing in the March regional elections, and Pavlovsky, long a thorn in someone’s side, was thrown on the pyre with him.

That’s all an aside, however. More important (that being a very relative term in this year of pointless uncertainty) is Sergei Mironov’s ouster. Since 2006, when Surkov formed A Just Cause to offer an appearance of a two-party democracy, Mironov and his party had played the role of “system opposition” moderately well: garnering votes from people not willing to vote for United Russia and using them as a mandate to do whatever United Russia does in the Duma.

In the past year, however, pressure has built up in — or, rather, around — the system. The young, educated, globally minded urban middle class has become increasingly fed up with the corruption and empty rhetoric they see around them, paving the way for such massively successful projects like the KermlinRussia Twitter parody, or Alexey Navalny’s anti-corruption work. A Just Russia failed to pacify this potentially combustible group, and so Mironov had to go. Though he continues to head the party (while it still exists), he has lost, along with his Federation Council seat (which he formally handed over today), an apartment provided by the state, a dacha, a private jet, personal security guards, and even the space where he housed his, yes, rock collection, accumulated while he worked as a geologist in the 1970s and ’80s.

In his stead, we get Prokhorov, a man who is good at business, a man who, like his constituents, feels equally comfortable in Russia and in the West, a man who, in his acceptance, talked of changing things — a clear appeal to those who would support people like Navalny. But let’s be honest: Most likely, this was not Prokhorov’s idea. “He wasn’t in any party before,” said Andrei Belyak, a spokesman for Prokhorov’s Onexim Group. “He didn’t touch politics before.” According to Belyak, it was “a proposal from the party,” proposals that, in Moscow, tend to be offers you can’t refuse. As Russian sociologist Denis Volkov told the New York Times, “Major businessmen are under the authorities’ control. If the government says you have to head a party, you head a party.” (Prokhorov has been the subject of one such political offer before: his idea to build the first Russian-made hybrid car, the Ë-mobile. According to one Onexim insider, the idea wasn’t his at all; it was a pitch from the Kremlin. The idea for the title — which, to a Russian ear sounds like “F-mobile” would to an American one — well, that was intentional, and another story altogether.)

So whose idea was it? A few weeks before the Prokhorov announcement, I went to visit a man named Leonid Gozman, a former professor of psychology who was long a fixture on the political scene as a political advisor, including to the two great reformers Yegor Gaidar and Anatoly Chubais. Now Gozman is the co-chair of Just Cause and has a spacious office paneled in dark wood overlooking one of Moscow’s sprawling bedroom communities. It is, strangely enough, part of the offices of Rosnano, the nanotechnology corporation once owned by the Russian state and headed by his comrade-in-arms Chubais. (Chubais, Gozman told me, provides him with political cover.)

Sitting in a big leather armchair and munching on sweets, Gozman explained his vision for the future of Russian politics. “The heroic period of Russian politics is over,” he said. “Now we need normal, boring political competition; 5 percent here, 5 percent there…. The most important task is institutionalize the schism in the ruling elite. Right now, we have people working in one government whose political views are more different than, say, Obama’s and Sarah Palin’s. Much more.” That is, the government includes both people like the liberal finance minister Alexei Kudrin, and hardliner former spook Igor Sechin. “This is normally called a coalition government, except in a coalition government, each of these factions has a party behind it,” Gozman continued. The point, then, would be to create a second party so that the liberals and the hawks don’t have to join the same one — in other words, more simulacra.

Was tapping Prokhorov a move to make Just Cause into such a party, I asked Gozman after the announcement? “Absolutely,” he said. Prokhorov himself has since said that he’d like to see Just Cause come in second in the fall parliamentary elections: a prediction that, given the engineered nature of Russian elections, will probably come to pass.

With all this political fidgeting, the end result is that little has changed in Moscow except the mood: It is increasingly tense and increasingly toxic, as people become increasingly fed up with waiting for such a big decision while watching the grand shows of incremental maneuvering. (Yesterday’s instantaneous dismissal of Mikhail Khodorkovsky’s appeal, combined with a barely reduced sentence, is a perfect example of how little these little things mean.)

“These are big questions, and business can’t wait half a year to get the answers,” Pavlovsky said, noting that the stalled-out tandem has led the country into political crisis. “It’s unbearable. For business, for society, even for Putin’s circle, which is clearly starting to put pressure on him because he can’t solve a simple question.” Pavlovsky is understandably frustrated, but there’s really nothing to be done except wait and keep playing the utterly fruitless, frustrating guessing game. Or just wait for August. There’s always August.