How a young Afghan went from policeman to murderer to saint.

MAIMANA, Afghanistan — Beneath a span beam bridge at the northern border of this provincial capital, the Maimana River trickles to a dun seep and turns to dust. Behind it, the layered escarpments of Turkestan Mountains' 12,000-foot crest fade to opal, then to nothing, evanescing into the blown-glass sky.

Between the mountains and the stream, on the dusty outskirts of Maimana, a handful of quivering flags mark the newest shrine in Faryab province: the grave of Samaruddin, a young border police officer killed by NATO troops after he murdered two American soldiers last month. 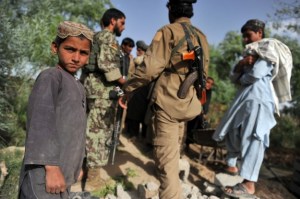 MAIMANA, Afghanistan — Beneath a span beam bridge at the northern border of this provincial capital, the Maimana River trickles to a dun seep and turns to dust. Behind it, the layered escarpments of Turkestan Mountains’ 12,000-foot crest fade to opal, then to nothing, evanescing into the blown-glass sky.

Between the mountains and the stream, on the dusty outskirts of Maimana, a handful of quivering flags mark the newest shrine in Faryab province: the grave of Samaruddin, a young border police officer killed by NATO troops after he murdered two American soldiers last month.

In this land of transubstantiation, the double metamorphosis of a policeman into a murderer and then, almost instantaneously, a saint lays bare the ultimate fulcrum for all the defeats of all the invasions that have befallen Afghanistan since time immemorial: the fervent, almost mystical, hatred of the occupier. A hatred that scores the face of every swallow-burrowed scarp, nourishes the root of every fruit tree, and supercedes all other loyalties and enmities. Even the cops in Maimana call Samaruddin “the shahid”: the martyr.

“It’s a religious thing,” explained Col. Bismillah, a district police chief in whose Maimana suburb of domed clay houses and withering apricot orchards Samaruddin’s body was buried. “Here in Afghanistan we believe infidels have martyred him for his faith.”

On April 4, after what Samaruddin’s supervisors say were three impeccable years of exemplary service, the 22-year-old man was manning a checkpoint outside the border police headquarters, a few dozen paces away from the bridge over the dying river. Several armored vehicles arrived, delivering American soldiers to train Samaruddin’s fellow officers at the headquarters. All of a sudden, Samaruddin leveled his Kalashnikov at the foreigners and opened fire, killing two soldiers. When his rifle clip was empty, he ran off.

Two days later, NATO forces tracked him down in southern Maimana, where he was hiding in a friend’s house, and shot him dead.

No one seems to know Samaruddin’s motives for killing Americans. “We can’t ask him,” grumbled his commander, Col. Najmuddin Sardori, who investigated his attack on the foreign soldiers. “He’s dead.”

But Maimana elders and police officials insist that Samaruddin emptied the clip of his government-issue, Hungarian-made Kalashnikov at the U.S. soldiers of his own volition — enraged by the burning of the Quran by religious fundamentalists in Gainesville, Florida, perhaps, or maybe upset by hearsay that American troops had violated rural Afghanistan’s strict gender divide by entering a girls’ school or peering immodestly into someone’s house. They say that the young man, an ethnic Uzbek, was not a Taliban sleeper agent acting on instructions from the conservative mullahs who have been proselytizing in the province’s villages.

Had Samaruddin been a Talib, he probably would not have been venerated. The Faryabis, mostly ethnic Uzbek and Turkmen farmers and carpet weavers beggared by drought, carry no love for the mostly Pashtun fundamentalist militia, whom they despise and fear, and whose insurgency has been gathering momentum in this northwestern province for the last two years. The local Taliban — anywhere between 200 and 800 men, by police estimation, all heavily armed and highly mobile on their motorcycles — control much of Faryab from dusk till dawn, when the province’s meager and incompetent police force virtually vanishes from the streets.

They levy taxes on the already pauperized population, extort tolls from travelers, and wield a campaign of threatening letters and phone calls to terrorize villagers into abiding by the ultra-conservative rules familiar from Taliban rule a decade ago.

“They are really strict, really unpopular here,” says Hazratullah, a pious young man who listens to an MP3 recording of the Quran to pass the time between customers at his cell phone repair shop in Andkhoi, Faryab’s second-largest city. “People are worried about what would happen if the Taliban come to power again.”

Samaruddin’s one-man insurgency and the way it has been lauded are all the more ominous precisely because he acted alone. They represent the prevalent discontent with the NATO presence in Afghanistan, the popular patience run low with a decade’s worth of promises that have failed to deliver even the most basic services to much of the country.

They are a portent of a kind of insurrection that could truly paralyze the U.S.-led effort to pacify Afghanistan: a revolt of the reverent and frustrated masses.

Less than a week after his burial in his ancestral suburb of Charm Gar Khona, people across Faryab were swearing that his shrine has magical powers; that the paralyzed walk away from it and the blind become sighted. Neighbors baptized the previously nameless, humped clay road near the checkpoint where Samaruddin killed American soldiers: It is now called Samaruddin the Shahid Street. All over Maimana, the young man looks dreamily from posters affixed to walls and windows: arms crossed at the chest of a green polo shirt, an exaggerated scarlet sun setting over a sea behind him.

“Ghazi, shahid Samaruddin Faryabi from the village of Charm Gar Khona,” the poster declares, bestowing upon the policeman a last name that signifies his geographic affiliation with his home province, and two other honorifics: shahid and ghazi, the killer of infidels. “Photo printed in Afghan Konica.”

Abdul Khaleq, who drives a zaranj moto-rickshaw in Maimana, picked up a poster at the shrine last month and taped it to his windshield, between two garish stickers of disembodied women’s hands holding red roses. He assured me that a man who had been deaf since birth had gained the ability to hear after praying at Samaruddin’s grave, though he, Abdul Khaleq, had not seen that man himself.

“Samaruddin the Shahid killed two Americans because they were taking pictures at a girl’s school,” said the young driver. “To me, it means he did a good thing. To me, it means he’s a ghazi.”

I wasn’t allowed to visit the shrine.

“You cannot come here,” Arsalan, an elder in Charm Ghar Khona, told me by phone. “The shrine is always crowded. People here are very rigid, they believe in old-fashioned things. They think of Americans as an enemy. They are very aggressive toward foreigners right now. They will rip you to shreds.”

Perhaps I could come by with a police escort? Impossible, I was told.

“Bringing a foreigner there would disgrace the police and make people angry,” Second Lt. Sayed Masood told me at the provincial police headquarters. “If we brought you to the shrine we would desecrate the shahid’s memory.”

Before I left Maimana I stopped at the bazaar to buy some bread and Watani cherry juice, produced in the northern Balkh province — perhaps made from the tiny and violently sweet cherries from Faryab. At the shop, above packages of shelled almonds, Samaruddin’s pensive face stared from a poster, looking past my temporary presence and up, at the 140 million years of violent orogeny of the Turkestan Mountains waning into the blinding white sky.

<p> Anna Badkhen is the author, most recently, of The World Is a Carpet. She is working on Walking with Abel, a book about transience. </p>
Tags: Afghanistan, Central Asia, Economics, Taliban

NEW FOR SUBSCRIBERS: Want to read more on this topic or region? Click + to receive email alerts when new stories are published on Economics, Central Asia, Afghanistan

Saying goodbye to a once-friendly land, now taken without a fight by the Taliban.

In rural Afghanistan, girls aren't the only ones getting married too young.