Can we please stop calling every protest an Arab Spring?

These days, it seems like observers and journalists -- as well as participants -- are quick to attribute any street demonstration or public unrest to the domino effect from the Arab Spring. Not that Foreign Policy would ever do this, of course. Sometimes, though, a protest is just a protest. 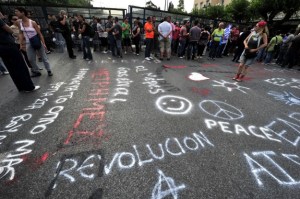 These days, it seems like observers and journalists — as well as participants — are quick to attribute any street demonstration or public unrest to the domino effect from the Arab Spring. Not that Foreign Policy would ever do this, of course. Sometimes, though, a protest is just a protest.

The nature of the peaceful protest, including Twitter messages to alert supporters, echoed the pro-democracy rallies that revolutionised Egypt. … In another echo of the Cairo rallies that eventually forced President Hosni Mubarak from power in February, the Spanish protesters have set up citizens’ committees to handle communications, food, cleaning, protest actions and legal matters. — BBC, May 18, 2011

On Sunday, some banners even evoked the Arab Spring movement to oust authoritarian rule. ‘From Tahrir Square to Syntagma Square, we support you!’ read one banner.  — Daily Mail, June 6, 2011

Like the Arab Spring protests, Spain’s anti-austerity demonstrations were spurred by mass youth unemployment. But unlike young people in the Arab world, Spain’s demonstrating youth live in one of the world’s most generous welfare states and have the right to vote out their leaders. That’s not to say that their grievances aren’t serious or that their protests aren’t significant, but the parallel doesn’t quite work. It would be unfortunate if “Tahrir Square” were turned into the 21st-century equivalent of the Che Guevara T-shirt. 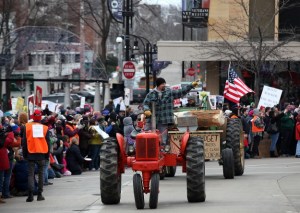 “All I know is that last week, when people were asking where Mubarak was — whether he had gone to Sharm el-Sheikh or Paris — I was saying he was ensconced in the governor’s mansion in Madison.”  — Former U.S. Rep. David Obey (D-WI)

Union protests against Wisconsin Gov. Scott Walker’s plan to cut public sector benefits and collective bargaining rights happened almost concurrently with the protests that led to the overthrow of Hosni Mubarak in Egypt. Comparisons between the two cases were common from both outside commentators and the protesters themselves. Best of all, right-wing commentator Glenn Beck argued that the unions and the Muslim Brotherhood were in league in the effort to create a New World Order.

Of course, the goals and tactics of Wisconsin’s public sector unions and the anti-Mubarak protesters were about as alike as koshary and cheddar. 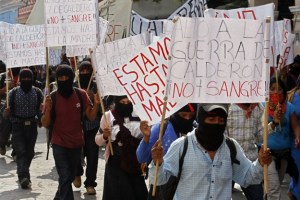 In fact, many protesters in Mexico City’s central plaza said they were directly inspired by the uprisings in the Arab world.

“People are standing up to transform their societies in Egypt and in Syria. We have to do the same thing here — to change our country from the bottom up,” said Ruben Bueno, a 42-year-old school teacher, who said two of his valued students had been gunned in the violence. — “Mexico’s Arab Moment,” Global Post. May 10, 2011

When thousands of Mexicans took to the streets of the capital in early May to protest against President Felipe Calderon’s war on drugs, it may have represented a shift in public opinion and a potential turning point in his presidency. But there’s one major difference between Calderon and the leaders of Egypt and Syria: Mexicans voted him into office and he has to step down next year. 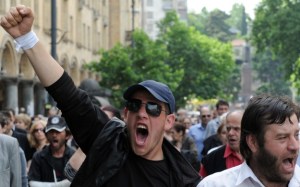 An Uprising in the Caucasus, but No Arab Spring in Georgia — Time headline, May 27, 2011

Oh, how quickly our all-purpose metaphors change. Remember way back in the 2000s when the “color revolution” was all the rage? Inspired by the overthrow of governments in Georgia (Rose), Ukraine (Orange) and Kyrgyzstan (Tulip), observers tried to impose this label on unlikely candidates like Lebanon (Cedar). Now, we’re quick to slap “Spring” after anything in the atlas. In any event, the Georgian opposition has been holding mass rallies in Tbilisi against President Mikheil Saakashvili since 2007. 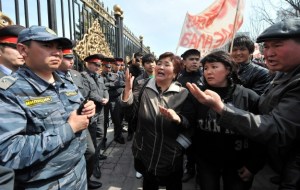 “I believe similar protests are quite possible [in Central Asian countries]. I think so because the current unrest in Arab countries in the Middle East is essentially different from the powerful fundamentalist movements of the past. These new protests emerge in the younger middle class — although Muslim believers, they are modern people who use the web and do not want to live in an endless authoritarian regime. These young people have traveled to the West and assumed some Western habits and lifestyles. They wish to have a similar political system controlled by society in their own countries, free from corruption and outrageous favoritism.” — Russian historian Andrei Zubov

It’s not a season any more so much as a virus. From Pakistan to China to sub-Saharan  Africa, regional scholars, journalists, and activists see signs of spring everywhere. Perhaps Zubov is right that conditions in Central Asia lend themselves to a possible democratic uprising, but forcing the “Spring” label onto every new antigovernment protest, wherever it takes place, both understates the uniqueness of this year’s events in the Arab world and doesn’t give enough credit to the complex and particular grievances that citizens elsewhere have when choosing to stand up to the power of the state.