What can Game of Thrones tell us about our world’s politics?

The rest of FP’s hard-working, award-winning contributors will provide plenty of reactions to Obama’s Afghanistan speech from last night.  I don’t have anything new to add that I didn’t say, oh, about a year ago to the week.  So let’s talk about…. Game of Thrones!!!  Set in a fictional medieval-type world (that looks juuuuust a bit ...

The rest of FP’s hard-working, award-winning contributors will provide plenty of reactions to Obama’s Afghanistan speech from last night.  I don’t have anything new to add that I didn’t say, oh, about a year ago to the week.

So let’s talk about…. Game of Thrones!!!

Set in a fictional medieval-type world (that looks juuuuust a bit like England) with a wisp of fantasy, there’s a lot for culture vultures and international relations geeks to like.  Based on a series of novels by George R.R. Martin, the first season on HBO just ended on a ratings high.  Essentially, Game of Thrones consists of a lot of palace intrigue, a healthy dollop of transgressive sex, and a whiff of zombies.  So you can see the attraction to your humble blogger.

Having finally caught up with the entire first season, however, I’m still puzzling out the show’s applicability to current world politics.  I think there are a few, but there’s a bias in the show that does suggest some serious constraints [WARNING: SPOILERS AHEAD].

On the one hand, Game of Thrones’ best feature has been demonstrating the importance of strategic acumen in politics.  The  first season’s protagonist, Ned Stark, is a stalwart friend, accomplished soldier, and dogged bureaucrat.  He was also a strategic moron of the first order, which was why I didn’t bewail his beheading in the season’s climactic moment.  Yes, it’s a shame that the good man died.  The thing is, he had so many, many opportunities to avoid that end, had he only demonstrated a bit more ability to think about how his rivals would react to his actions.  Important survival trip:  don’t reveal all of your plans and information to your rival until you have engaged in some rudimentary contingency planning.  Or, to put it more plainly: 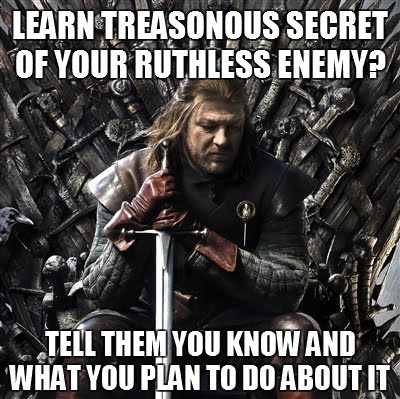 On the other hand, I’m just not sure how much the world of Westeros translates into modern world politics.  Realists would disagree, of course.  Cersei Lannister makes the show’s motto clear enough:  “in the game of thrones, you win or you die.”  That’s about as zero-sum a calculation as one can offer.  In this kind of harsh relative gains world, realpolitik should be the expected pattern of behavior.

Which is also part of the problem with Game of Thrones.  World politics is about the pursuit of power, yes, but it’s not only about that.  What do people want to do with the power they obtain?  Social purpose matters in international affairs as well, and there’s precious little of that in Game of Thrones.  Sure, there are debates about dynastic succession, but there are no fundamental differences in regime type, rule of law, or economic organization among the myriad power centers in this world.  I hope this changes in Season Two.

My favorite touch in Game of Thrones is the words of each house in Westeros.  For House Stark, “winter is coming”; for House Lannister, “hear me roar”; for House Baratheon, “ours is the fury”; and my favority, House Greyjoy, “we do not sow.”  In case you were wondering, for House Drezner, our words are, “it is time to read.”  Alternatively, “Chinese food is coming.”