Will geopolitics bail out the United States?

After last night’s stunningly useless set of speeches, I’d put the odds of the U.S. not raising the debt ceiling by August 2nd at 1 in 2. Like many other observers, I’m finding it increasingly difficult to envision a deal that would get through the Senate while attracting a majority of House Republicans [You meant a majority ...

After last night’s stunningly useless set of speeches, I’d put the odds of the U.S. not raising the debt ceiling by August 2nd at 1 in 2. Like many other observers, I’m finding it increasingly difficult to envision a deal that would get through the Senate while attracting a majority of House Republicans [You meant a majority of the House of Representatives, right?–ed. No, I meant a majority of House Republicans. I’m pretty sure that Boehner and the rest of the House GOP leadership will refuse to pass any debt ceiling plan that relies too much on House Democrats.]

So, it’s gonna be a fun few weeks for those of us who study the global political economy. Let’s start by thinking the unthinkable — what will happen if there is a default?

Tom Oatley, who pooh-poohed my fears of the debtpocalypse last week, makes an interesting point about the composition of U.S. debt-holders: 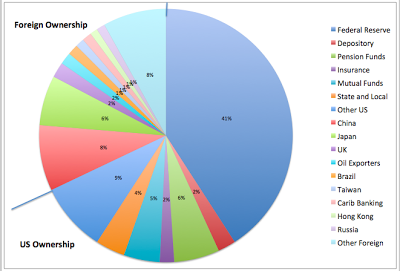 By these figures, about 63% of US government debt is owned by central banks (foreign and domestic) and/sovereign wealth funds. Most of these entities are American friends and allies. Another 4% is owned by US state and local governments. That leaves 33%–about $4.8 trillion–in private hands. Of this, the financial institutions with the most restrictive regulations regarding asset ownership (depository institutions) own only 2% of the total ($290 billion). Mutual Funds, who may or may not have to dump downgraded debt, hold another 9% ($1.35 trillion).

What’s the point? The discussion about the impact of US default revolves around the market response to default. Useful to recognize that most of the US government debt is held by public-sector agents who are much less sensitive to balance sheet pressures and regulatory constraints. These public sector agents are also substantially more sensitive to “moral suasion” and direct appeal than private financial institutions. The structure of ownership of US debt might dampen the negative impact of any default that does occur.

This is pretty interesting. Oatley focuses on “moral suasion,” but there’s also a national-interest motive for many U.S. debtholders. Most of the official holders of U.S. debt have a strong incentive for a) the value of their holdings not to plummet; and b) the United States economy to continue to snap up other their exports. If China, for example, is buying up U.S. debt to sustain its own growth, then neither a technical default nor a ratings downgrade should deter China or other export engines from continuing to buy U.S. debt even if there’s a spot of trouble.

So it appears that complex interdependence will force America’s rivals to continue to hold U.S. debt even after the debtpocalypse!! The United States in the clear, right?

Not so fast. Here are five “known unknowns” I can think of that might complicate Oatley’s analysis:

1) What if the creditors form a cartel? In my 2009 paper, this was the one scenario that gave me the heebie-jeebies, because it’s the one scenario under which creditors can wring geopolitical gains from debtor states. Any kind of default can act as a focal point moment in which U.S. creditors decide it’s time to apply a haircut to American power and influence.

I don’t think this is going to happen, because the national interests of American debtholders remain divergent. That said, if U.S. allies interpret default as a signal of U.S. unreliability in times of crisis, then all bets are off.

2) What about the economic nationalism of China? China is the largest foreign debtholder, which gives it a certain agenda-setting power in moments of crisis. There are a lot of compelling reasons why China would decide to try to minimize the economic disruptions . On the other hand, there’s a lot of resentment on Chinese Internet boards already about the Chinese purchases of U.S. debt. During a period in which the CCP is already concerned about domestic instability, one could envision a scenario whereby they try to mollify nationalists at home by acting out against the United States.

3) What would be the effect of a mild market reaction on the House of Representatives? The less the markets react, the less that the House GOP will feel a need to do anything. There will come a point, therefore, when official debtholders might need to signal to the House that, in IPE lingo, “s**t needs to get done.” That signal would in and of itself roil markets, not to mention the effects the current uncertainty is already having on the real economy.

4) What is the fiscal shock from a default? There are two causal mechanisms through which a default could affect the global economy. The first is through panic and uncertainty roiling financial markets. The second, however, is from a dramatic fiscal contraction due to limited government spending. Given the lackluster state of the current recovery, it wouldn’t take much to tip the United States back into recession.

5) What if there’s another AAA bubble? FT Alphaville’s Tracy Alloway provided another interesting chart earlier this month on the distribution of AAA securities:

The AAA bubble re-inflates and suddenly sovereign debt becomes the major force driving the world’s triple-A supply. The turmoil of 2008 shunted some investors from ABS into safer sovereign debt, it’s true. But you also had a plethora of incoming bank regulation to purposefully herd investors towards holding more government bonds, plus a glut of central bank liquidity facilities accepting government IOUs as collateral. Where ABS dissipated, sovereign debt stood in to fill the gap. And more.

It’s one reason why the sovereign crisis is well and truly painful.

It’s a global repricing of risk, again, but one that has the potential for a much largerpop, so to speak.

We know that a downgrade of U.S. Treasuries would likely lead to a downgrade of state and municipal bond ratings as well. We also know that the ripple effects from the collapse of asset-backed securities were much larger than anticipated before the 2008 crisis. This is why the possible knock-on effects of downgrade so many AAA asserts makes me itchy. Even if banks and other financial institutions have minimal exposure to U.S. Treasuries, I don’t think it’s possible for them to have minimal exposure to all U.S.-based AAA sovereign debt.

These are just the five known unknowns that I could think of in the past hour — there are probably many, many more. Readers are strongly encouraged to add them in the comments.