The extent of the 1982 bloodletting in Hama wasn't fully known until years later. The media revolution in the interceding three decades may have just helped prevent another massacre.

Something was stirring in the Syrian city of Hama. The Assad regime appeared to be losing control; it had issued vague warnings about an Islamist takeover, but had gone ominously silent for over a week. A government-planned trip to the city was canceled. Syrian officials warned privately that any attempt by intrepid journalists to visit Hama would be "life-threatening."

It was February 1982, but the parallels to Syria today are striking. During that bloody month nearly 30 years ago, Syrian Muslim Brotherhood members rose up in the city, killing hundreds of troops loyal to the Alawi-led regime of President Hafez al-Assad. In response, Assad conducted one of the most chilling acts of retribution in the modern Middle East: Forces under the command of his brother, Rifaat, leveled entire neighborhoods of the city, killing an estimated 20,000 people. 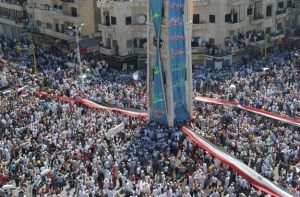 Something was stirring in the Syrian city of Hama. The Assad regime appeared to be losing control; it had issued vague warnings about an Islamist takeover, but had gone ominously silent for over a week. A government-planned trip to the city was canceled. Syrian officials warned privately that any attempt by intrepid journalists to visit Hama would be “life-threatening.”

It was February 1982, but the parallels to Syria today are striking. During that bloody month nearly 30 years ago, Syrian Muslim Brotherhood members rose up in the city, killing hundreds of troops loyal to the Alawi-led regime of President Hafez al-Assad. In response, Assad conducted one of the most chilling acts of retribution in the modern Middle East: Forces under the command of his brother, Rifaat, leveled entire neighborhoods of the city, killing an estimated 20,000 people.

Karl Marx said that history repeats itself, first as tragedy and second as farce — but he never traveled to Hama. Syria’s fifth largest city, enraged by the brutal murder and torture of a 13-year-old boy in May, rose up again this year, and again a dictator bearing the surname Assad appears determined to use overwhelming military force to quell the rebellion. In the intervening three decades, new tools have helped the media circumvent some old problems in covering the Middle East’s civil wars. But while the coverage today provides a clearer picture of events than it did in 1982, serious gaps still remain in the world’s understanding of developments in the besieged city.

Hafez al-Assad’s crackdown on Hama began in the dead of night on Feb. 2, 1982, and continued over the next month until every neighborhood in the city was subdued or destroyed. While reporters stationed in Damascus were acutely aware that a bloody insurgency was underway in the city, they had little sense of its scope. On Feb. 24, the Associated Press quoted Western diplomatic sources saying that the fighting in Hama had “resulted in an estimated 2,000 casualties on both sides” — an approximation that grossly underestimated the number of people killed.

It was not until a year and a half later that reports of the Hama massacre’s true extent filtered into the international media. Amnesty International’s November 1983 report estimated that 10,000 to 25,000 people had been killed during the crackdown. The report also contained chilling details about the Assad regime’s methods of coercion. “I was stripped naked…. My wrists were then tied and I was hung up and whipped on my back and all over my body,” recounted a Syrian trader detained in 1980. “I was beaten on the toes until my nails fell out.”

Even then, Hama did not become a byword for the brutality with which Middle Eastern autocrats treated their subjects until the publication of Thomas Friedman’s From Beirut to Jerusalem in 1989, which offered a blow-by-blow account of the massacre. Friedman recounted a conversation he had with a friend — a businessman who had been involved in several deals with Rifaat al-Assad — who said that the Syrian general had pushed back against some estimates of those killed as too low, not wanting to erode the fear that the Assad regime had instilled in the Syrian population. “What are you talking about, 7,000?” Rifaat reportedly said. “No, no. We killed 38,000.”

But Friedman’s and Amnesty’s reports were released long after Assad had consolidated his control, rendering their impact in Syria largely moot. At the time, reporters were not only constrained by the media blackout — they also had to contend with that old standby, fear of government retribution. On March 4, 1982, Washington Post assistant managing editor Jim Hoagland described the difficulty journalists in then Syria-occupied Beirut faced in reporting on the unfolding struggle. “One British journalist working the Middle East is convinced that some senior Syrian authorities did make a deliberate decision nearly two years ago to silence press critics,” he wrote, the result of which was the assassination of several Lebanese journalists and the shooting of a Reuters correspondent. “[T]he perception of danger has spread throughout the Beirut press corps,” Hoagland concluded. 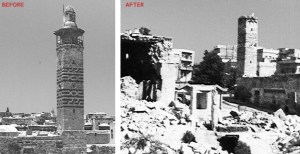 Today, President Bashar al-Assad — despite instituting an even stricter media blackout and inspiring just as much fear among journalists as his father — has found it much more difficult to control the flow of information out of Hama. Even as Assad’s troops seized Hama’s Assi Square, in the center of town, Syrian citizen journalists uploaded videos that purportedly show tanks securing positions across Hama, civilians wounded and bloodied as the crackdown unfolded, and corpses piled in a morgue (warning: extremely graphic). Not all of the reports are videos — this account of the Hama crackdown posted on Facebook was purportedly provided by an observer who escaped the besieged city.

Of course, this new information comes with a price: It is often impossible for journalists to verify whether the events shown in any given video took place at the time and in the place described by those who uploaded them. For example, Assad loyalists recently circulated a video that supposedly shows Syrian opposition figures dumping the bodies of soldiers into a river near Hama — “evidence,” they claimed, that the opposition revolt had turned violent. However, observers raised doubts about the identity of those killed and contended that the incident could not have taken place in Hama, and other versions of the clip described the events as taking place in the restive town of Jisr al-Shughour. While the facts remain inconclusive, both pro-regime and opposition activists clearly have ample incentives to distort events in order to support their preferred narrative.

Beyond original reporting, the Internet has also been a vital tool for rallying attention to the events in Hama. The hashtag #RamadanMassacre was created on July 31, at the start of the Islamic holy month of Ramadan and Assad’s crackdown in the city. “The regime is telling Syria & the world: We can do another Hama,” wrote @BSyria in a typical tweet featuring the hashtag. “In fact, we are doing another one right now.”

According to the Twitter trend-tracking site Trendistic, #Ramadanmassacre was included in 0.1 percent of all tweets at 8 p.m. on Aug. 1 — and then peaked at 0.3 percent of all tweets at 6 a.m. on Aug. 5, when government troops moved to quell the traditional Friday protests. While that may seem like a small percentage, Twitter estimated that it receives an average of 2,200 tweets per second, which would mean that there were approximately 23,760 tweets to #Ramadanmassacre over that hour — a sizable community drawing attention to the unfolding violence.

The increased attention to the violence has been complemented by a better, though by no means perfect, understanding of its scope. Opposition networks such as the Local Coordination Committees of Syria and the Syrian Observatory for Human Rights post daily updates of the crackdown as well as casualty figures. The online human rights organization Avaaz has also launched a feature to bring attention to the almost 3,000 Syrians who have been “disappeared” since the beginning of the unrest. While these figures should be treated with caution, as they come from partisans in the dispute, it is indisputable that they have had an impact — fueling public outrage at the Assad regime’s brutal methods of submission. U.S. Secretary of State Hillary Clinton said on Aug. 4 that at least 2,000 people had been killed in Syria and that President Barack Obama’s administration was “working around the clock to try to gather up as much international support for strong actions against the Syrian regime as possible.”

Syrian state media broadcast images of Hama on Aug. 5 that suggest its military offensive has been largely successful in subduing the city’s population.  But the violence, while horrible, is still relatively minor compared with the devastation wrought the first time around. Activist groups said that at least 200 people had lost their lives to shelling and snipers in the week’s violence — perhaps 1 percent of those killed in the 1982 massacre.

Heightened media attention is undoubtedly one reason for the Assad regime’s comparative restraint. It is also undoubtedly a factor encouraging Syrians to take to the streets across the country in solidarity with their besieged countrymen. Hama’s history may be repeating itself, but this time there’s a chance for a less horrific ending.

Library of Congress (Hama, before and after the government assault)