The Fog of Mexico’s Drug War

After one of the worst attacks on civilians ever, President Felipe Calderón shows exactly why he can't win the war he started. 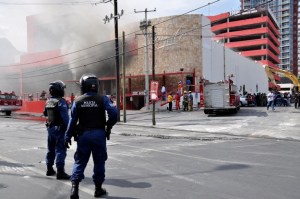 Two dozen gang members attacked a casino in the Mexican town of Monterrey on Thursday, leaving more than 50 apparently innocent people dead, in one of the highest civilian death tolls in President Felipe Calderón’s now five-year-old drug war. It was about as clear a statement of purpose from Mexico’s brutal narco-gangs as could possibly be made. However, Calderón’s statement the following day, as has been the case too often during the bloody struggle, was a hash of mixed messages.

The president called the attack on the Casino Royale “barbaric” and an “act of terror.” Rightly so; the massacre rose above the level of the grinding daily brutalities in a war that has claimed more than 40,000 lives, on a par for audacity and cruelty with a twin-grenade attack on Independence Day revelers in Michoacan in September 2008 that killed 8 and wounded more than 100. But then Calderón went from condemning the attack to making an attack of his own — against the United States, for its role in the drug dilemma.

Calderón is right to point the finger at the United States, but not at this particular moment in time. Drug consumption in the United States was not what allowed the attack in Monterrey to occur. The total impunity that reigns in Mexico — due to the failure of police and security forces to maintain any semblance of trustworthy authority, the dragging speed of reform in the police forces, and the absence of any investigative capacity or will whatsoever — is responsible for this atrocity. And Calderón’s inability to admit fault or honestly describe the sorry state of his signature initiative is exactly what is making it so difficult for him to convince Mexicans of anything, including the notion that his party should remain in office next year.

Since the Calderón administration took office in December 2006, its biggest failure has been in communicating with the Mexican public. Calderón took the electorate completely by surprise when he launched the drug war (he ran for office on a platform of job creation), prompting critics to accuse him of trying to divert attention from allegations of electoral fraud.

Then, shortly into his term, Calderón was photographed wearing a military uniform — not a welcome sight for many Mexicans, who remember the dirty wars of the 1970s, when the military was responsible for killings and mass graves now associated with the drug cartels.

Calderón has tried in vain to communicate both his administration’s victories and setbacks. But kicking a soccer ball into a net and proclaiming that he has scored a goal in the war on organized crime has played about as well as George W. Bush’s “now watch this drive”; praising the arrest of a “narco” on Twitter when the alleged trafficker has yet to be tried or even charged has done little to instill public confidence in a judicial system that is finally undergoing much-needed reforms.

Calderón’s impassioned plea at Interior Minister Juan Camilo Mouriño’s funeral in late 2008 was not much better. Instead of dispelling false rumors than Mouriño’s plane had been blown up by drug traffickers or simply mourning the tragic death of his friend and political ally, the Mexican president turned his eulogy into a speech about the war on organized crime. “Today, more than ever, is the moment to look to the future, the moment to persevere in the fight to overcome adversity and to build this country [into] a more just, prosperous, and safe country that our countrymen dream of and that millions of Mexicans seek each day,” he pronounced.

National Security spokesman Alejandro Poire has not fared much better than the president. Just this week, he asserted, confusingly, that marijuana consumption was up thanks to a rebounding economy. This may be true, but it’s hardly responsible to make that point when the government has continually tried to take a moral line against drug trafficking (rather than an economic or legal one).

There is no doubt that the drug violence in Mexico is reaching new lows of viciousness and that the number of killings continues to climb. And with the opposition Institutional Revolutionary Party, or PRI, poised to take the presidency next year, the Calderón administration must do more than continue its crackdown on the brutal drug thugs — it must actually show some progress.

The closest thing to a stated strategy or end goal to the drug war is that the authorities hope to dismantle the organized crime syndicates and to transform a national security threat into a local security problem — in other words, to break down the cartels so that Mexico has a gang problem similar to that of the United States.

But no one in the administration has personally explained the military strategy or offered explanations for why it doesn’t appear to be working. Nor has anyone explained how exactly a reformed police force will be created and more important, maintained. The army has repeatedly entered cities like Ciudad Juarez, Tijuana, Nuevo Laredo, or Culiacán, taken over the local police forces and purged them of their bad apples, only to retreat again. The supposed goal is to attract more educated young people into the police force and to combine municipal and state forces under one command — which is all good in theory, but in a country where plomo (lead, as in bullets) is favored by the narcos as a currency for coercion over plata (silver, as in cash corruption), it’s difficult to believe that education will be much of a match for firepower.

Nor has it been. In general, police forces simply revert to their old ways once the soldiers leave. And as a result of the continued failure, many citizens and even security experts believe the war on organized crime is little more than a dog-and-pony show to keep Washington happy and the Merida Initiative money flowing.

Federal Police Chief Genaro García Luna recently said that he doesn’t expect the levels of violence to diminish for another seven years — in other words, by the end of the next presidential term. As honest as that assessment was, it will be difficult for the Mexican public to swallow if they don’t see immediate results in policing and security.

While the mass graves and massacres that have hit the Mexican states of Durango and Tamaulipas in the past year are clearly acts of barbarity, atrocities like the one in Monterrey will resonate more with the Mexican people at large. Monterrey, after all, is Mexico’s industrial hub, home to both the elite and a growing, hard-working middle class. It is considered the most North American city in the country, and prides itself on being more forward-looking and modern than the rest of the country. Yet the narcos are exerting more and more influence there, and disorganized freelancing thugs in the area are causing mayhem — first, blockades on major highways for no apparent reason, and now the casino attack. Some Mexican pundits are saying, “If Monterrey falls, then Mexico does too.”

At the end of the day, Calderón’s actions will obviously define the last days of his leadership, but his choice of words now is still vital. Mexico may be an 11-year-old democracy, but its electorate is still somewhat accustomed to authoritarian rule and decisive, father-knows-best messages from its leaders (whether they are perceived to be right or wrong). Mixed messages simply add to the current state of anxiety. Mexico does not need more promises that the authorities will hunt down those responsible. The people need to hear that the authorities will prevent this from happening ever again and an explanation as to how they will achieve that — and then they need to see the transformation with their own eyes.