Ever since the first warrior picked up a wooden stick in imitation of a sword, the line between war and entertainment has been decidedly blurry. Military training in ancient Greece and chivalric Europe gave rise to the Olympics and medieval jousting tournaments; paintball guns and video games have become tools for honing the skills of today's soldiers. The realm of strategy, however, is where games have exerted the most remarkable impact on the conduct of war, serving as a tool for, as one U.S. Army general put it, "writing history in advance." 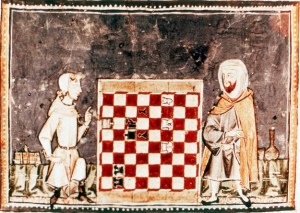 Ever since the first warrior picked up a wooden stick in imitation of a sword, the line between war and entertainment has been decidedly blurry. Military training in ancient Greece and chivalric Europe gave rise to the Olympics and medieval jousting tournaments; paintball guns and video games have become tools for honing the skills of today’s soldiers. The realm of strategy, however, is where games have exerted the most remarkable impact on the conduct of war, serving as a tool for, as one U.S. Army general put it, “writing history in advance.”

6th century A.D.
Chess is invented in Northern India, spreads to Persia and then Europe, and by the late 15th century evolves into its modern form. Its original name in Sanskrit, chaturanga, means “four parts,” referring to divisions of the military of the Gupta Empire.

15th century
Firearms, invented centuries earlier in China, spread to armies throughout Asia, Europe, and the Middle East. The new weapons mean battles can no longer be accurately simulated without killing people, forcing strategists to look to more abstract means of preparing for war.

1811
Prussian army advisor Leopold von Reisswitz and his son Georg, an army lieutenant, publish an elaborate manual, Instructions for the Representation of Tactical Maneuvers under the Guise of a Wargame. Thirteen years later, Georg presents King Friedrich Wilhelm III with a refined version of their game, in which two teams face off across a scale map using dice to simulate the vagaries of war. The king is enthralled, and kriegsspiel, the grandfather of all modern military war games, is born.

1870
Prussia’s decisive victories in the Franco-Prussian War bring international renown to the king’s army and its training techniques, including the now widely imitated kriegsspiel. Militaries begin using war games to predict how future conflicts might unfold.

1887
The first American war games, modeled on kriegsspiel, are held at the Naval War College in Newport, R.I. Theodore Roosevelt, as assistant secretary of the Navy, later becomes an avid spectator.

1918-1941
Governmental interest in war games peaks, notably in Germany (where actual military exercises are restricted by the Treaty of Versailles), the United States (whose Navy conducts several hundred games, most of them focused on the Pacific, between the wars), and Japan.

1927
Fourteen years before Japanese planes descend upon the U.S. naval base at Pearl Harbor, Hawaii, officers in the Imperial Navy under the leadership of Lt. Comm. Sokichi Takagi play out the scenario in a war game — and find it ending badly, with the base barely damaged and U.S. forces quickly retaliating against Tokyo. Officers redo the exercise repeatedly until they arrive at the battle plan used in 1941.

1950s
American strategic intellectuals like Herbert Goldhamer, Andrew Marshall, and Herman Kahn explore the implications of a nuclear apocalypse in elaborate games simulating not just military conflict but the geopolitics of the Cold War.

1958
The future of war gaming blinks to life with the Navy Electronic Warfare Simulator, a $7 million computer system that takes up three floors of a building on the Naval War College campus.

1981
The U.S. Army opens the National Training Center, a 1,000-square-mile state-of-the-art combat-simulation facility in the Mojave Desert. It is nicknamed “Fort Atari” on account of its embrace of a new technology that first appeared as a Star Trek-themed toy: laser tag.

1983
The film WarGames, starring Matthew Broderick as a teenage hacker, brings the nuclear war gaming of Kahn, Marshall, and others to the big screen. Marshall later hires one of the movie’s writers, Peter Schwartz, to do the real thing.

2002
The summer before the Iraq invasion, a $250 million, three-week game is used to test the U.S. military’s readiness for a confrontation with a major Middle Eastern country. Retired Marine Lt. Gen. Paul K. Van Riper, playing a wily Saddam-like dictator, quickly brings the U.S. military to its knees with tactics that presage the Iraq insurgency. Mortified Pentagon leaders suspend the game; Van Riper quits in protest.

March 2003
“The enemy we’re fighting against is different from the one we war-gamed against,” Lt. Gen. William S. Wallace, U.S. Army corps commander in Iraq, remarks as the unseating of Saddam Hussein takes longer than anticipated.

2008
The Pentagon begins developing a $130 million “scale model” of the Internet to conduct the first full-fledged cyberwar games to prepare for the next frontier of conflict. Meanwhile, U.S. Defense Secretary Robert Gates criticizes the Pentagon’s “tendency toward what might be called next-war-itis,” calling on military leaders to spend less time predicting the wars of the future and more on the wars at hand. Two years later, the Army decides to scale back its big spring war game for the first time in 15 years.

March 2009
In the wake of the 2008 financial collapse, the Pentagon convenes a group of hedge-fund managers, bank executives, and academics for a first-of-its-kind economic war game, designed to test the ability of other countries to wield the global economy as a weapon. The big winner? Unsurprisingly, China.

October 2010
Electronic Arts’ Medal of Honor, a hyperrealistic first-person shooter video game set in the Afghanistan war, debuts to much fanfare. “We are probably in some ways back to the period before 1500, when war games were extremely popular,” says military historian Martin van Creveld.

Charles Homans is a special correspondent for the New Republic and the former features editor of Foreign Policy.
Tags: Economics, History, Military, Theory

NEW FOR SUBSCRIBERS: Want to read more on this topic or region? Click + to receive email alerts when new stories are published on Military, Economics