7 Things You Didn’t Know About the War on Terror

From an attempt to negotiate with Osama bin Laden to a proposal to threaten to bomb Mecca, it's been a wild decade for the U.S. national security establishment.

Our new book, Counterstrike: The Untold Story of America's Secret Campaign Against Al Qaeda, is in many ways a summary of the past decade of our reporting on the military, intelligence community, and domestic law enforcement as it entered a new era of Darwinian evolution to counter violent extremism.

It also is our deep dive into a decade of American counterterrorism efforts -- from the work of commando trigger-pullers and spies on the ground up to senior political leaders who wanted to defend the nation (and get re-elected). Our efforts to report and write this book allowed us to uncover many new missions never discussed before -- and gave us an understanding of how the "war on terror" had changed over the last decade. 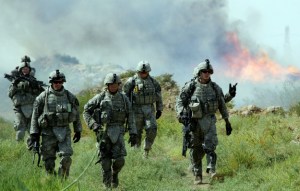 Our new book, Counterstrike: The Untold Story of America’s Secret Campaign Against Al Qaeda, is in many ways a summary of the past decade of our reporting on the military, intelligence community, and domestic law enforcement as it entered a new era of Darwinian evolution to counter violent extremism.

It also is our deep dive into a decade of American counterterrorism efforts — from the work of commando trigger-pullers and spies on the ground up to senior political leaders who wanted to defend the nation (and get re-elected). Our efforts to report and write this book allowed us to uncover many new missions never discussed before — and gave us an understanding of how the “war on terror” had changed over the last decade.

Our book assesses the 10 years since 9/11 as the military divides the fight: into tactical missions on the battlefields of modern terrorism; then the operational advancements that provided the means to success while not securing final victory; and at the top, the strategic level of policy debates about how the nation should combat this threat to its security.

Here are seven vignettes from Counterstrike that offer glimpses into the thinking of policymakers and commanders in early days after the Sept. 11 attacks and how that thinking evolved over the following decade into a more whole-of-government approach to combating terrorists: 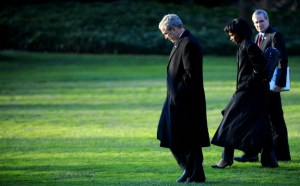 The George W. Bush administration, like all of its predecessors, swore never to negotiate with terrorists. But it did undertake an extraordinary, and extraordinarily secret, outreach effort to open a line of communication with Osama bin Laden and al Qaeda’s senior leadership. It was an attempt to replicate how the United States tried to sustain a dialogue with the Soviet Union, even during the darkest days of the Cold War, when White House and Kremlin leaders described in private and in public a set of acceptable behaviors — and described with equal clarity the swift, vicious, even nuclear punishment for gross violations.

In the months after the Sept. 11 attacks, Bush’s national security staff, working through the intelligence agencies, made several attempts to get a private message to bin Laden and his inner circle. The messages were sent through business associates of the bin Laden family’s vast financial empire as well as through some of the al Qaeda leader’s closest relatives, a number of whom were receptive to opening a secret dialogue to restrain and contain their terrorist kinsman, whom they viewed as a blot on their name. (To be sure, other relatives were openly hostile to the American entreaties.)

According to a senior American intelligence officer with first-hand knowledge of the effort, the response from Osama bin Laden was silence. And the effort was suspended. 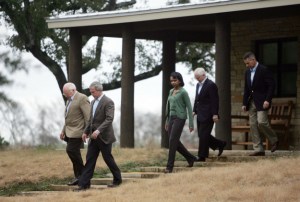 2. Sometimes a Wedding Is Just a Wedding

In the early days after the Sept. 11 attacks, the CIA and FBI vied to produce the most compelling intelligence reports that tracked suspected terrorist plots. The agencies often worked at cross purposes, sometimes unwittingly. At one point in early 2002, both agencies were tracking what American analysts said were growing preparations for a major “wedding” somewhere in the Midwest. (In terrorist vernacular, the word “wedding” is often code for a major attack.) Dribs and drabs on this “wedding” planning made their way to President Bush from both agencies, independent of each other, of course. Finally, over the Easter holiday, during a video-teleconference with top aides in Washington from his ranch in Crawford, Texas, Bush stopped the briefing, exasperated by the discrepancies in the rival agencies’ reporting about the suspected threat.

“George, Bob, get together and sort this out,” Bush told his CIA director, George J. Tenet, and FBI director, Robert S. Mueller III.

Bush’s instincts were correct. When the analysts finally untangled their clues, it turned out that the ominous “wedding” really was just that: the matrimony of a young man and a young woman from two prominent Pakistani-American families. There was no threat. There was no plot. 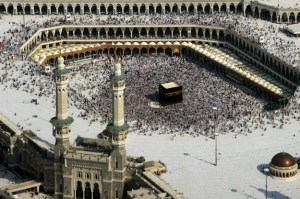 3. The Threat to Bomb Mecca

As fears of a second attack mounted following the 9/11 strikes, U.S. government planners frantically cast about for strategies to protect the country. Even the most far-fetched ideas had a hearing, however briefly. In one case, some government planners proposed that if al Qaeda appeared ready to attack America again, the United States should publicly threaten to bomb the city of Mecca in Saudi Arabia, the holiest site in all of Islam, in retaliation. “Just nuts!” one Pentagon aide wrote to himself when he heard the proposal. The idea was quickly and permanently shelved. 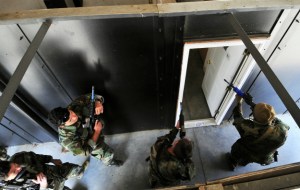 4. The SEAL Raid in Iran That Didn’t Happen

When U.S. forces routed the Taliban government in Afghanistan and forced bin Laden and his top lieutenants to flee, many senior al Qaeda leaders, including bin Laden and his deputy, Ayman al-Zawahri, escaped to neighboring Pakistan. But a separate group, including the al Qaeda leader’s son, Saad bin Laden, fled to northern Iran, where American troops would not pursue them and the Iranians would likely not detain them. But the Shiite clerics running Iran placed the al Qaeda operatives and their family members under virtual house arrest, and they became a shield against possible attacks from the Sunni-based terrorist organization.

One plan in particular illustrated the bold thinking and wildly unrealistic aims of the military’s initial approach after 9/11 to kill or capture terrorist leaders. The plan called for hunting the eight to 10 senior al Qaeda leaders and operatives who had sought refuge in Chalus, an Iranian resort town on the Caspian Sea, where they had been detained.

At the Joint Special Operations Command at Fort Bragg, N.C., military planners drew up options for Navy SEALs to sneak ashore at night using state-of-the-art mini-submarines. Once they landed, the SEALs would slip past Iranian guards to snatch the al Qaeda leaders. Another option called for Special Operations helicopters to spirit American commandos into the town and whisk them out again with their quarry. The Americans went as far as conducting two or three rehearsals at an undisclosed location along the U.S. Gulf Coast in early 2002. They conducted small-boat insertion exercises involving about 30 Special Operations personnel, most SEALs, and eventually concluded the mission was feasible if they were provided with more detailed intelligence on the locations of the al Qaeda members and the security around them.

The logistics of the mission were daunting. Chalus sits at the edge of the Elburz coastal mountain range about 70 miles north of Tehran, and the failed rescue of the American hostages in Iran in April 1980 loomed large in commanders’ memories. Eventually, Gen. Richard B. Myers, the chairman of the Joint Chiefs of Staff, rejected the mission as too risky and too politically volatile. Many of the al Qaeda operatives are reportedly still there. 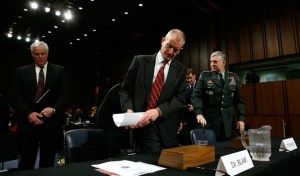 U.S. intelligence and military commandos have carried out tens of thousands of raids in the decade since 9/11. The amount of material seized from terrorist and insurgent targets has grown to a massive size. The Defense Intelligence Agency (DIA) operates exploitation triage centers and giant warehouses for storing intelligence products — in war zones, rear headquarters in countries like Qatar, and back in the United States. One intelligence analyst said that walking into one of the warehouses for documents and media exploitation reminded him of the final scene in Raiders of the Lost Ark, when the captured Ark of the Covenant is crated up and rolled into a cavernous storage area that contains all the government’s other dangerous secrets.

All told, more than two million individual documents and electronic files have been catalogued by media type: hard copy, phone number, thumb drive. Each is inspected by a linguist working with a communications analyst or computer expert. The DIA analysts are joined by specialists from other agencies, including the FBI and the Drug Enforcement Administration. Yet given the overwhelming volume, no more than about 10 percent of the captured intelligence has ever been analyzed. Intelligence officers say they simply are overwhelmed, and untold quality leads may still be buried in the piles of computers, digital files, travel documents, and pocket litter. 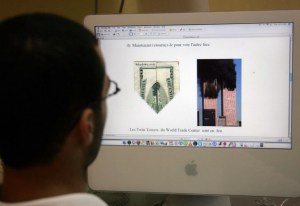 Cyberspace is the terrorists’ ultimate safe haven. It’s where they recruit, raise money, and even plot attacks, using coded language while playing online video war games. The U.S. government fights back. One technique is called false band replacement, whereby the intelligence agencies infiltrate militants’ networks and post their own material to counter extremist efforts on those same jihadist websites. The trick is to forge the onscreen trademarks — “web watermarks” — of al Qaeda media sites. This makes messages posted on these sites official, and sows dissent and confusion among the militants.

This Internet spoofing can be used in support of more traditional combat missions. There is at least one case confirmed by American officials in which a jihadist website was hacked by American cyberwarriors to lure a high-value al Qaeda to a surreptitious meeting with extremist counterparts — only to find a U.S. military team in waiting. 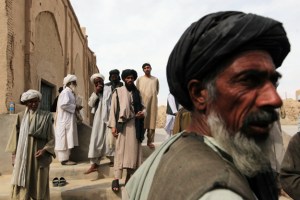 U.S. counterterrorism officials have learned fighting terrorists effectively means targeting specific nodes of that network that support and enable militants who strap on suicide vests. This strategy focuses on neutralizing enablers such as the financiers, gun-runners, and logisticians. Among these terror linchpins are religious leaders who bless attacks. Heavenly reward will not await a suicide bomber unless his death and those of his victims is deemed halal, in keeping with Islam’s sacred sharia law. Each militant network has a sharia emir, usually at the level of a sheikh or mullah. In Iraq, American commanders specifically killed emirs to throw a wrench in a suicide bombing networks. “Take him out, and suicide bombings from that network are frozen until he is replaced,” said one military officer with command experience in Iraq.

NEW FOR SUBSCRIBERS: Want to read more on this topic or region? Click + to receive email alerts when new stories are published on Economics, Middle East and North Africa, Afghanistan

Will a Billion-Dollar Indigenous Climate Pledge Pay Off?

Lebanon’s Reformers Trade the Street for the Ballot Box

Will a Billion-Dollar Indigenous Climate Pledge Pay Off?

Lebanon’s Reformers Trade the Street for the Ballot Box