A short visual history of an awfully contentious idea. 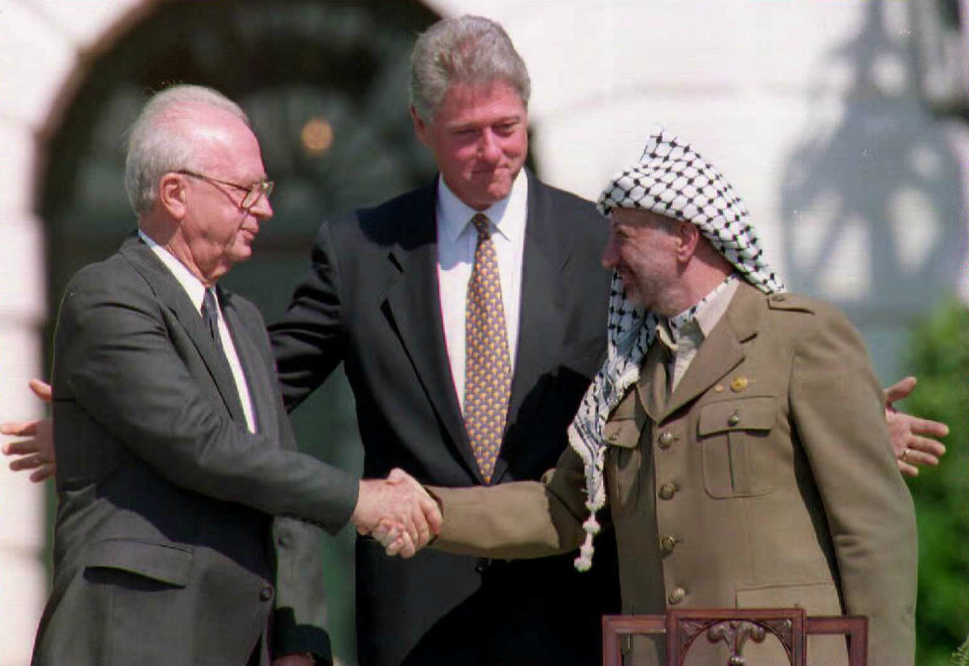 There is nothing more permanent in the Middle East than those institutions meant to be temporary. One of the most prominent examples of this phenomenon is the Palestinian National Authority (PA), which was intended as a 5-year interim organization while the Israelis and Palestinians negotiated a final-status agreement — and which is now entering its 17th year of existence.

The PA sprung from the Oslo Accords, a series of negotiations signed in Sept. 1993 that sought to provide a framework of negotiations for resolving the Israeli-Palestinian dispute. Though formally established the following year, over time, the PA’s powers and responsibilities were more clearly defined: A 1995 agreement divided the Occupied Territories into “Area A,” where the PA had responsibility over security-related and civilian matters; “Area B,” where the PA only had control over civilian issues; and “Area C,” where the Israelis remained in control.

But despite these best-laid plans, the PA still exists — and has never evolved into a full-fledged state for the Palestinians. When PA President Mahmoud Abbas takes the Palestinian case to the U.N. Security Council this week, he is in effect throwing his hands up in exasperation at the history of false starts and broken promises that have characterized direct negotiations with Israel.

Above is the handshake that started it all: U.S. President Bill Clinton stands between Palestine Liberation Organization (PLO) leader Yasser Arafat and Israeli Prime Minister Yitzhak Rabin on the White House lawn, after the two longtime antagonists signed the Oslo Accords. 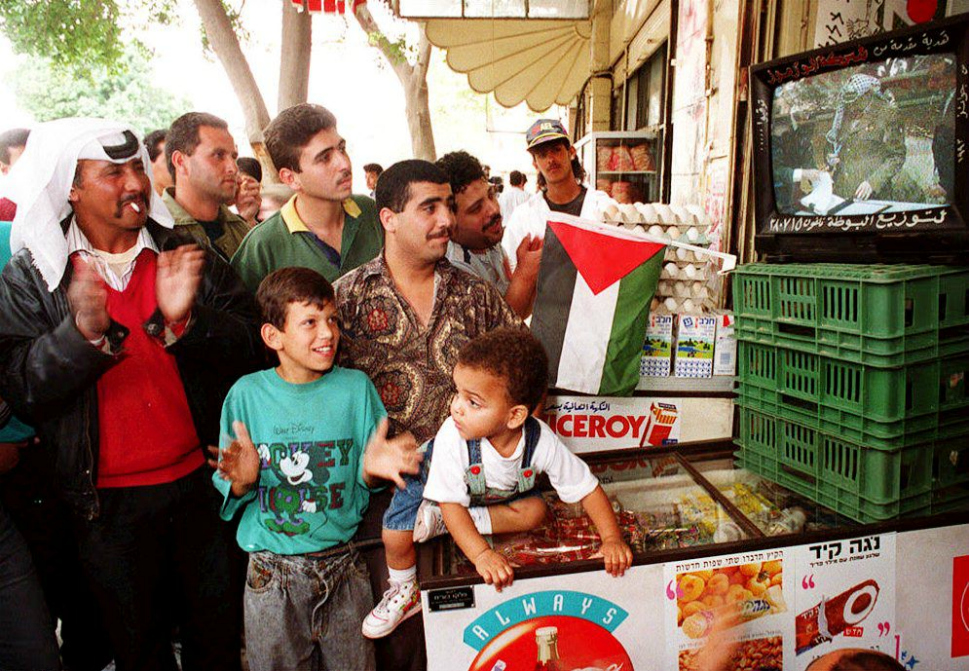 The May 1994 Gaza-Jericho agreement signed by the Israeli government and the PLO, the official representative of the Palestinian people, laid out the structures and authority of the PA in greater detail, and sketched out a plan for Israeli withdrawal from the West Bank and the Gaza Strip. The treaty’s preamble reaffirmed Israeli and Palestinians’ “determination to live in peaceful coexistence, mutual dignity and security, while recognizing their mutual legitimate and political rights.”

In the heady days following Oslo, it appeared that the two sides might even be capable of living up to those lofty sentiments. Here, Palestinians in the West Bank city of Jericho cheer as they watch Arafat sign the accord in Cairo. 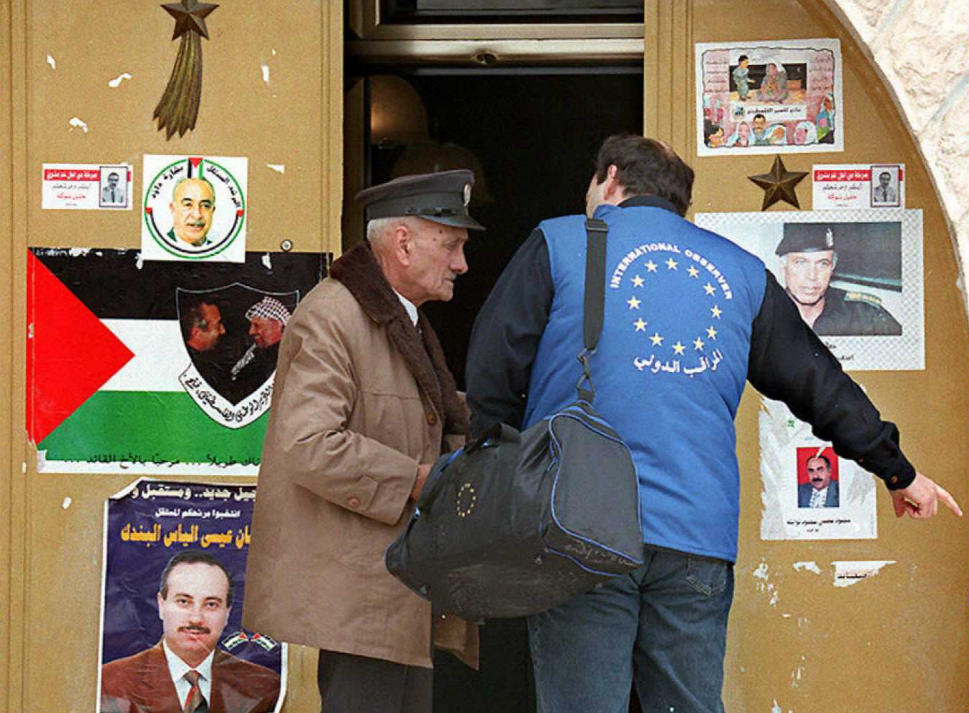 The creation of the PA also introduced a new phenomenon into Palestinian politics: elections. In January 1996, Palestinians went to the polls in the West Bank, Gaza, and East Jerusalem to vote for a president and representatives to the Palestinian Legislative Council (PLC).

The election represented a ratification of Arafat’s preeminent position in the Palestinian national movement. He was elected president with almost 90 percent of the vote, and his Fatah party captured 55 of the PLC’s 88 seats. Hamas, the more radical Islamist party, boycotted the elections as lending validity to the Oslo process, which it opposed. 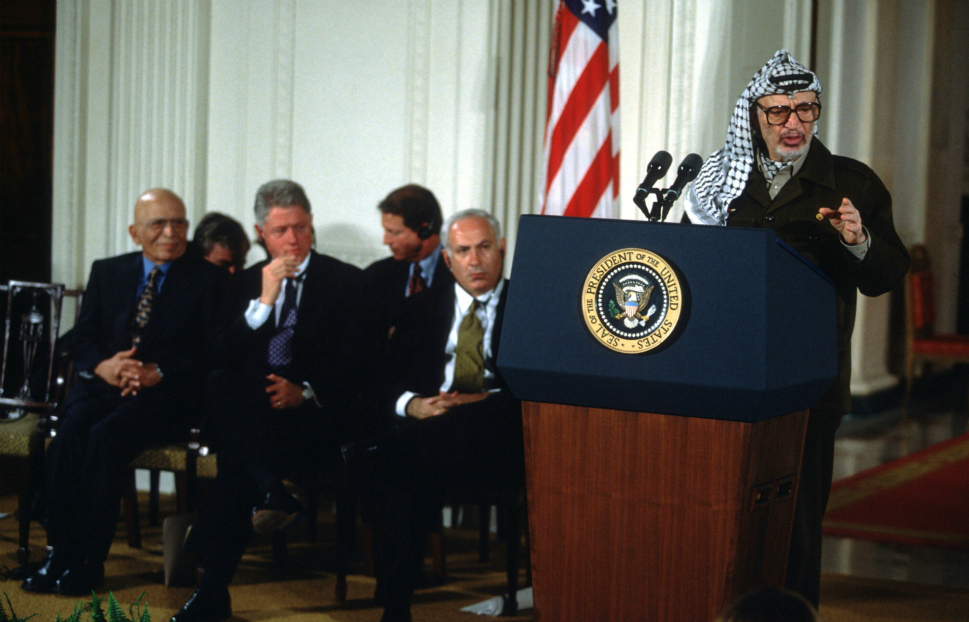 In October 1998, President Bill Clinton’s administration finally convinced Arafat and Israeli Prime Minister Benjamin Netanyahu to sign the Wye River Memorandum. The agreement, which was intended to help fulfill the promise of the Oslo Accords, transferred 13 percent of the area in the West Bank and Gaza under full Israeli control (“Area C”) to full or partial Palestinian control. In exchange, the Palestinians agreed to deepen its security cooperation with the United States and Israel, and crack down on the supply of illegal weapons within the Palestinian territories. 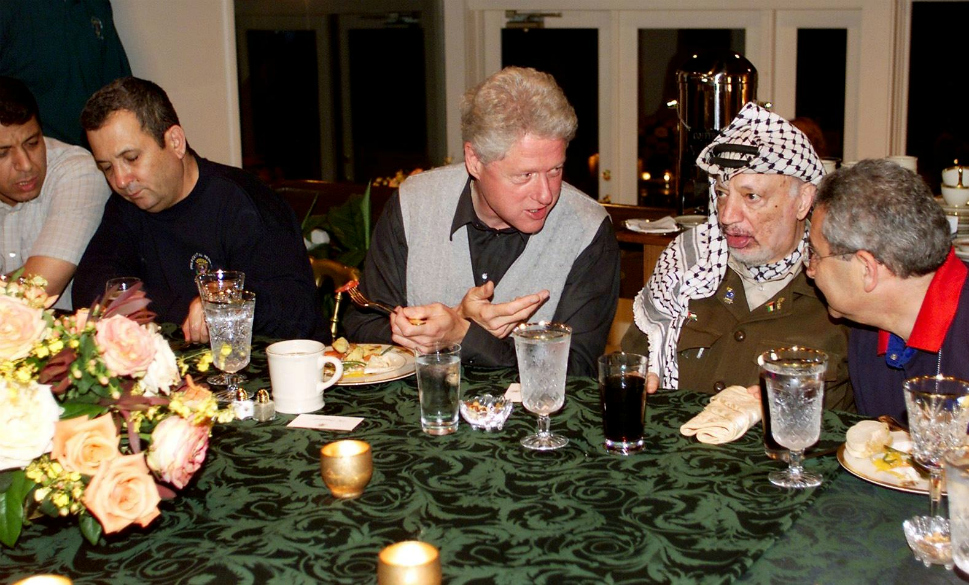 In the summer of 2000, what was intended to be a five-year process to reach a solution on all outstanding issues in the Israeli-Palestinian dispute was in its sixth year — and Clinton’s second term was nearing its end. Eager to ink a Mideast peace deal that would cement his foreign policy legacy, the U.S. president invited Israeli Prime Minister Ehud Barak and Arafat to Camp David in a bid to reach a final status agreement.

Though the two sides made notable progress on the territory of the nascent Palestinian state, negotiations stalled over the status of Jerusalem as a shared capital and the Palestinian demand for the “right of return” for refugees. The United States, Israel, and the Palestinians released a statement at the end of the summit saying that “they were not able to bridge the gaps and reach an agreement,” despite conducting negotiations “unprecedented in both scope and detail.”

For Clinton, there was little doubt who to blame for the summit’s failure. As he recounts in his book, My Life, when Arafat called him a great man, he responded, “I am not a great man. I am a failure, and you have made me one.” 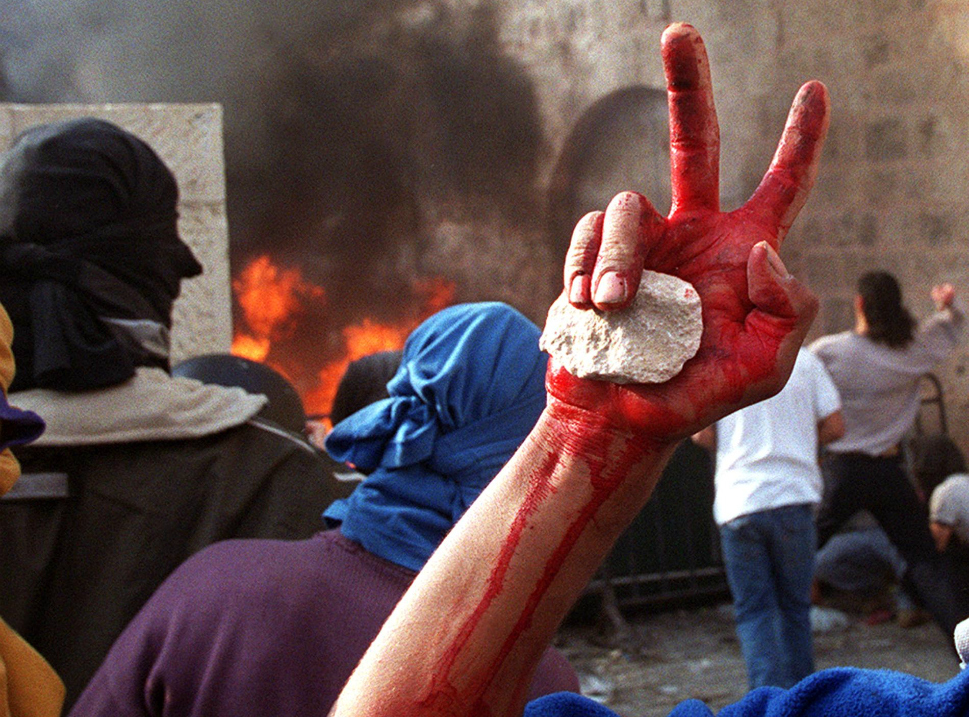 The failed peacemaking efforts would soon give way to bloodshed. After Israel’s conservative opposition leader Ariel Sharon’s visit on Sept. 28, 2000, to Jerusalem’s Temple Mount — one of the contested religious sites that had caused peace talks to collapse only months earlier — clashes broke out between Palestinians and the Israeli security forces. The unrest, which came to be known as the Second Intifada, would rage for over four years and claim over 4,000 lives.

Another casualty would be the PA’s state-building efforts. Israeli-Palestinian security cooperation collapsed as the Second Intifada gained momentum, and the chance of Israel ceding control over territory to the PA became a distant dream.

Here, a Palestinian youth holds a stone in his blood-stained hand after carrying a slain Palestinian protester outside Jerusalem’s Old City in December 2000. 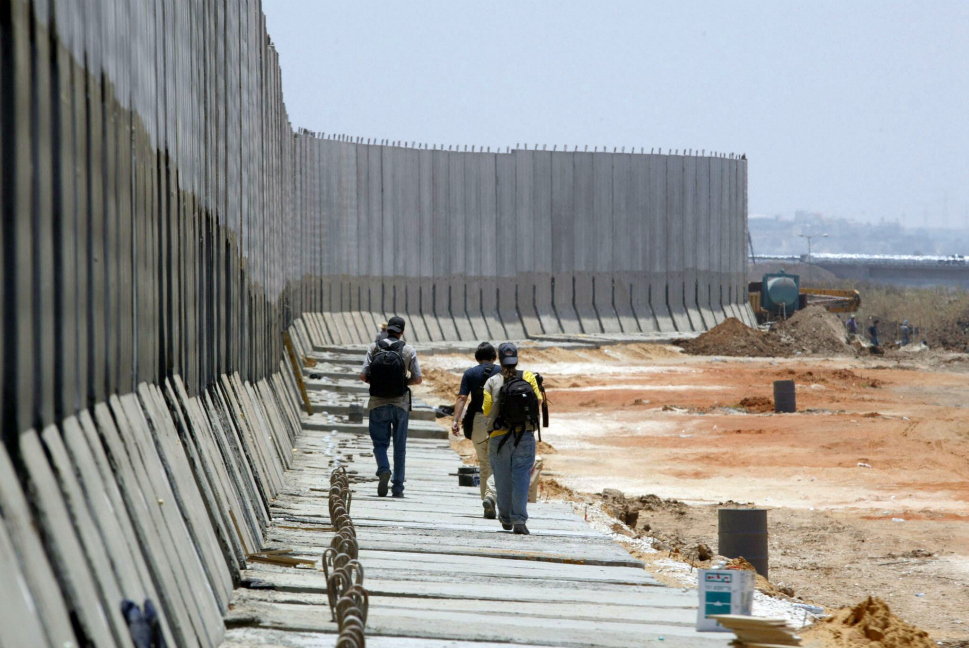 In an effort to contain Palestinian attacks on Israeli civilians, Israeli Prime Minister Ariel Sharon’s government started construction on a wall to separate the West Bank from Israel. Alternatively called an “anti-terrorist fence” by the Israeli government and an “apartheid wall” by Palestinian organizations, the barrier has become one of the most contentious symbols of the Israeli-Palestinian dispute. While the barrier mostly follows the “Green Line,” which marked the boundary between Israel and the West Bank before the 1967 war, it encroaches on the West Bank at a number of points — a fact that Palestinians see as a violation of their territory.

Above, journalists walk along the 26-foot high wall outside the Palestinian town of Qalqilya in June 2002. 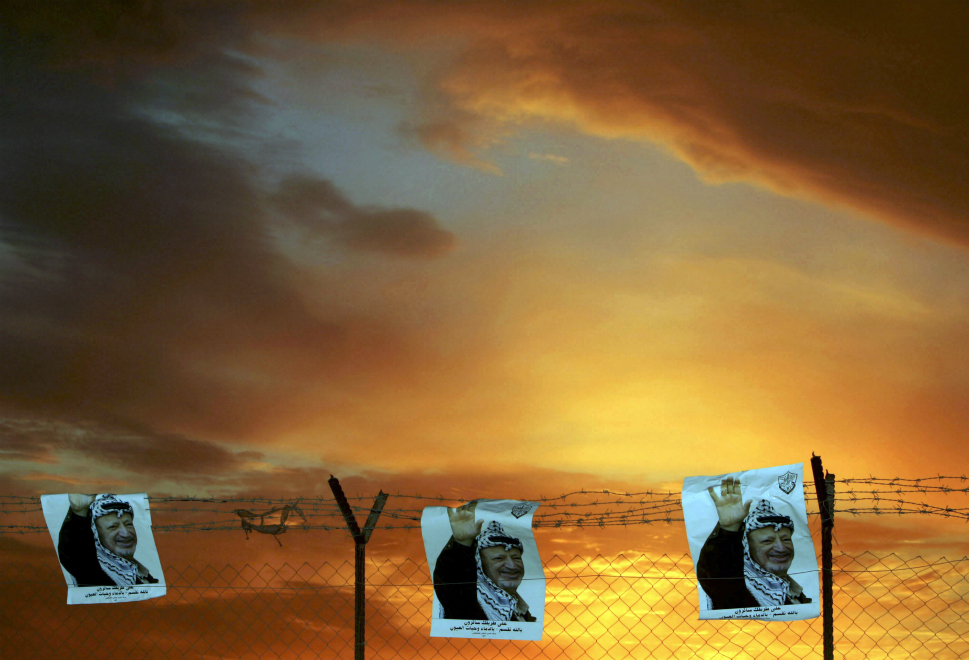 On Nov. 11, 2004, Yasser Arafat, the grand old man of Palestinian politics, passed away in a Paris hospital. With the Second Intifada still raging, his funeral took place in Cairo, and he was buried in the West Bank city of Ramallah — still miles away from Jerusalem, which he had envisioned as the capital of a new Palestinian state. One PA aide mourned his death as a loss of “the tutor, the leader, the son of Palestine, its symbol, the builder of its modern nationalism and the hero of its battle for freedom and independence.”

The death of Arafat, who had dominated Palestinian political life and concentrated power in his own hands, quickly reverberated through Palestinian politics. New groups and actors, which he had previously been able to keep under his sway, would soon come to the fore. 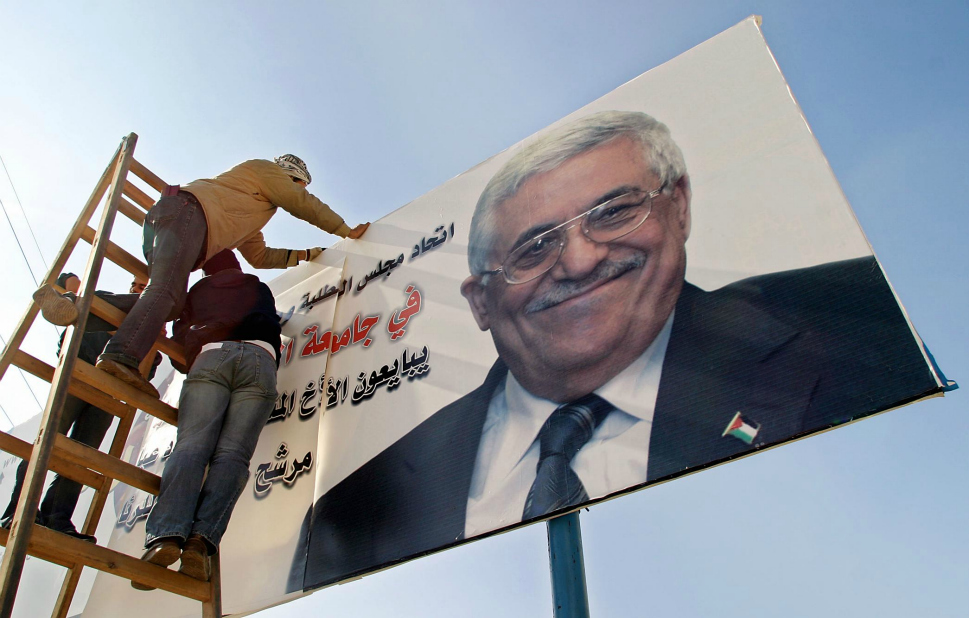 The first promotion following Arafat’s death went to his longtime deputy, Mahmoud Abbas. The former PA prime minister was selected as the head of the PLO only hours after Arafat’s death, and went on to win the Palestinian presidential election in January 2005 with over 60 percent of the vote. 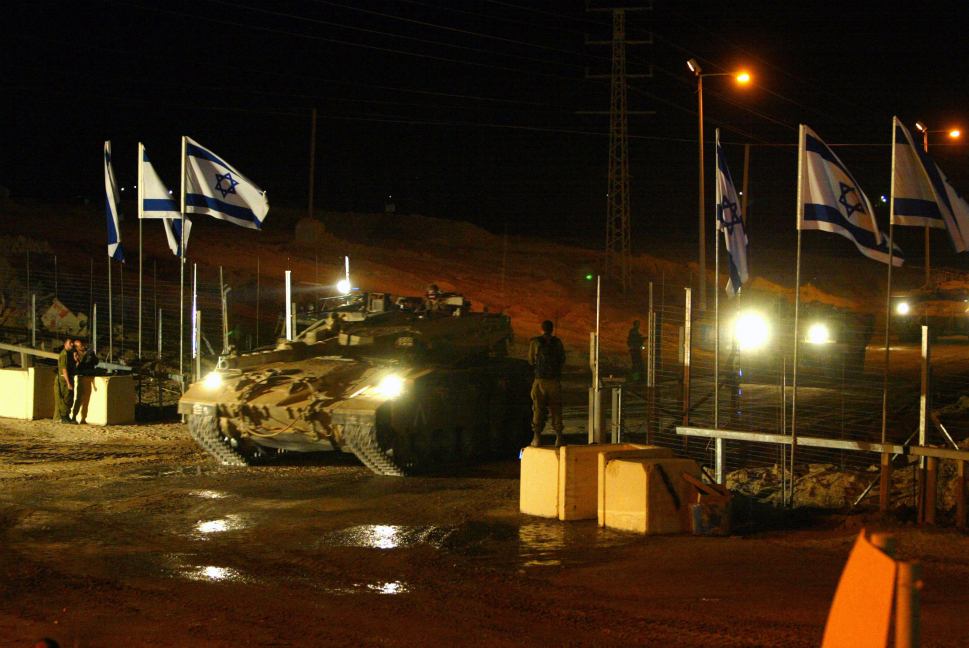 In May 2003, the hawkish Prime Minister Ariel Sharon shocked the Israeli public by saying that the Israeli “occupation” of the West Bank and Gaza “can’t continue endlessly…. I don’t think that’s right.” By that December, Sharon had laid out a plan for Israel’s unilateral withdrawal from the Gaza Strip, saying that while he would like to have a Palestinian partner in peace, “I do not intend to wait for them indefinitely.”

The withdrawal plan provoked intense political battles within Israel, and fractured Sharon’s own Likud Party. But under Sharon’s direction, Israel withdrew all of its military forces and dismantled all of its settlements in Gaza by September 2005 — providing the Palestinian Authority with its first real opportunity for self-rule. 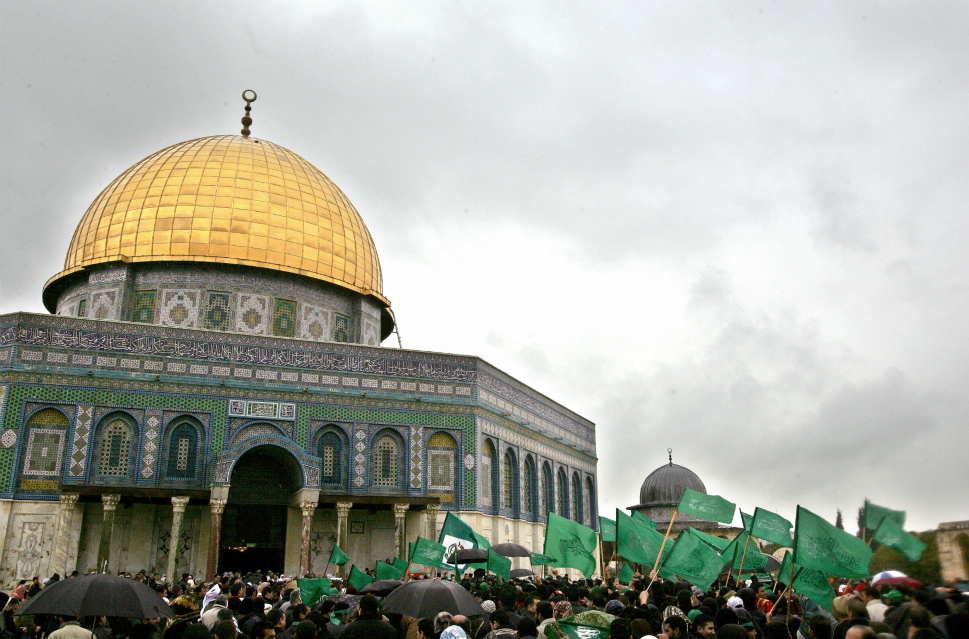 They didn’t go quite as planned. The balance of power in the PA was turned on its head in the Jan. 2006 Palestinian legislative elections, in which Hamas seized 74 of 132 seats. The victory of the Islamist party — which refused to renounce violence or recognize Israel’s right to exist — precipitated a crisis with Israel and the PA’s international patrons. Following the election, the George W. Bush administration and the European Union cut off contact with the PA, and suspended assistance to the organization. 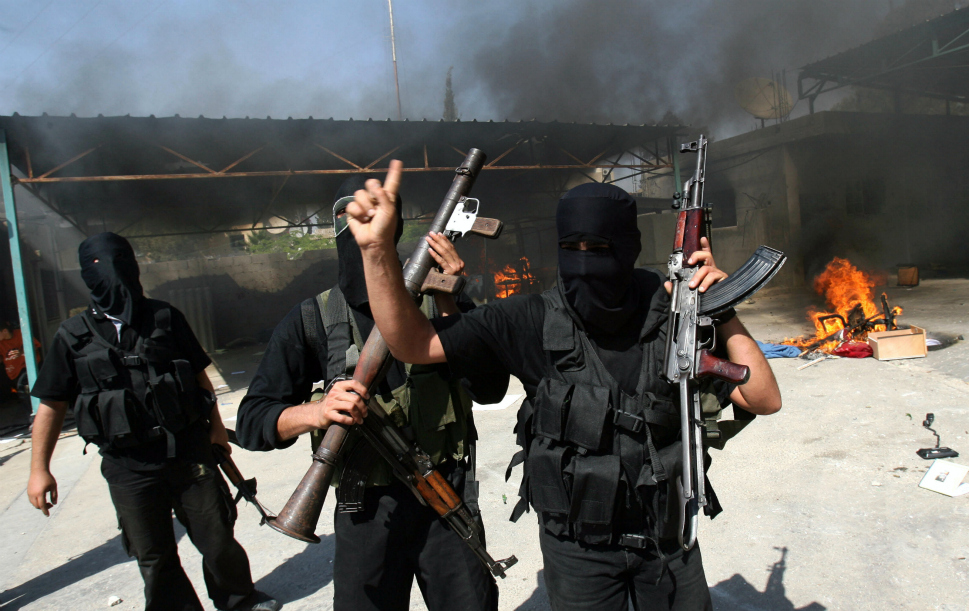 Tensions between Fatah and Hamas soon spilled into the streets, paralyzing the PA. By December 2006, running clashes between the rival militias had become a regular feature of life in the occupied territories. The fighting climaxed in June 2007, when Hamas forces captured the PA’s Preventive Security Headquarters in Gaza and overran Fatah positions throughout the Strip. Abbas responded by dissolving the Palestinian unity government, declaring a state of emergency, and cracking down on Hamas supporters in the West Bank.

Above, Hamas militants celebrate after taking a building belonging to Abbas supporters in the city of Rafah. 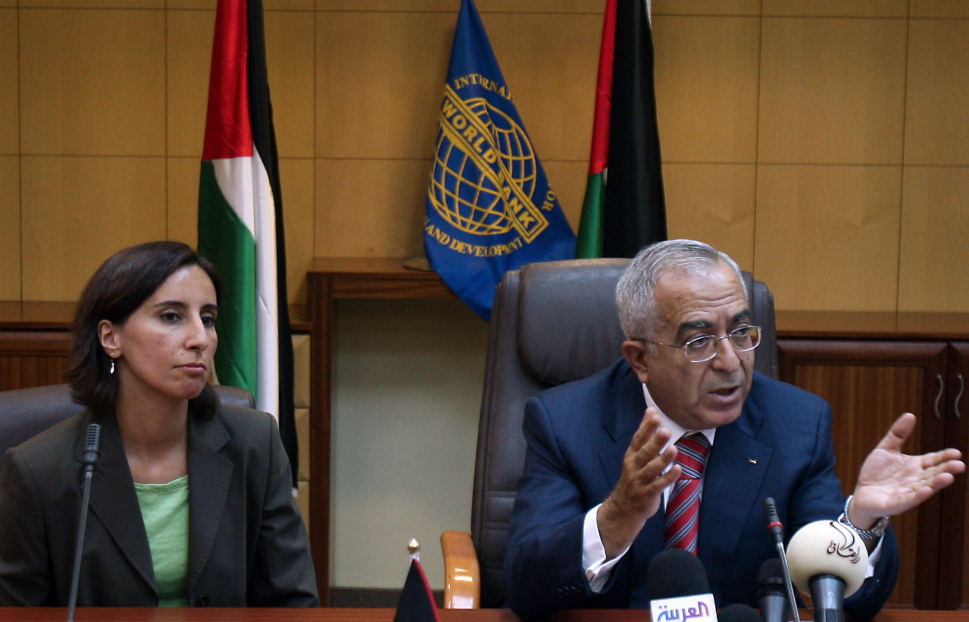 The Second Intifada, the Hamas-Fatah conflict, and the stagnation of the Israeli-Palestinian peace process had all conspired to undermine the PA’s authority. But in August 2009, Prime Minister Salam Fayyad — an American-educated technocrat — launched an initiative to revive the organization’s promise. Fayyad’s plan, titled “Ending the Occupation: Establishing the State,” was intended to establish a blueprint for institution-building so that Palestine would be ready to establish a state within two years. 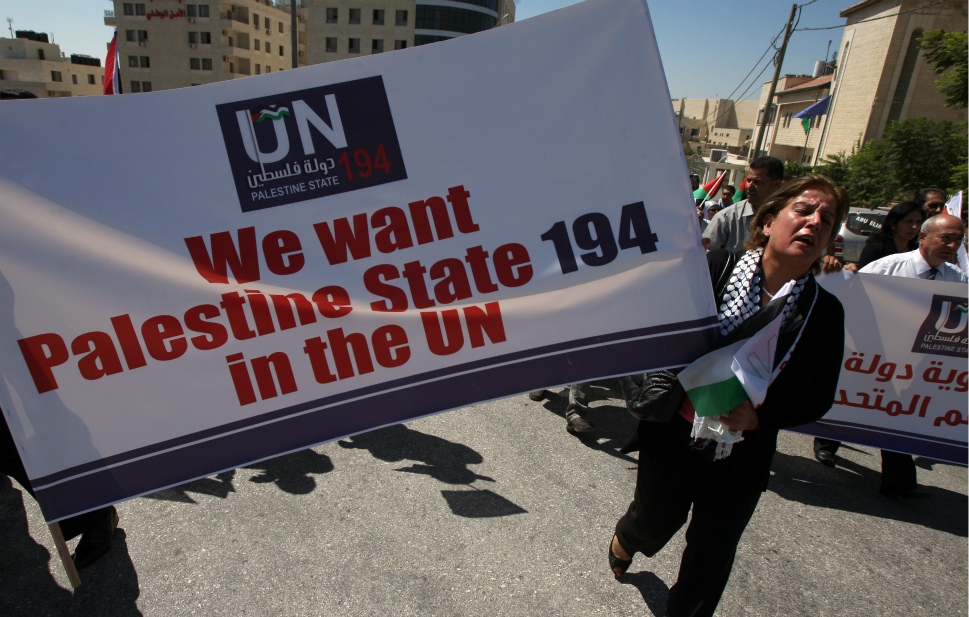 Fayyad quickly earned a reputation in Israeli and international for his transparent, efficient use of funds. In April 2011, the World Bank and the International Monetary Fund both determined that the PA had established institutions that were strong enough to sustain a state. “Significant reforms still lie ahead for the PA — but no more than those facing other middle income countries,” read the World Bank report.

However, as past experience has shown, the PA’s success is largely based on the internal unity of the Palestinian movement, and the willingness of the international community to support its goals. Whether Abbas’s statehood bid at the United Nations this September advances that end, or derails it, still remains to be seen.

Above, Palestinians rally outside the U.N. building in the West Bank city of Ramallah on Sept. 8, 2011.