In shopping for hearts and minds in Iraq, the State Department made some bizarre impulse purchases. 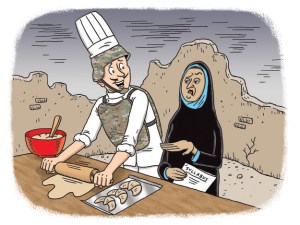 In 2009, the State Department sent me to Iraq for a year as part of the civilian surge deployed to backstop the more muscular military one. At the head of a six-person Provincial Reconstruction Team (PRT), I was assigned to spend U.S. government money creating projects that would lift the local economy and lure young men away from the dead-end opportunities of al Qaeda. I was to empower women, turning them into entrepreneurs and handing them a future instead of a suicide vest. This was newfangled hearts and minds, as practiced with a lavish checkbook and supervised by a skittish embassy looking for “victory” anywhere it could be found. We really did believe money could buy us love and win the war.

The work was done by amateurs like me, sent to Iraq on one-year tours without guidance or training, and eager to create photogenic success stories that would get us all promoted. No idea was too bizarre, too gimmicky, or too pointless for us hearts-and-minders: We actually preferred handing out croissants and children’s calendars to tackling tough issues like health care or civic services. One month it might be guaranteed-to-fail small businesses like car washes and brake repair shops in an economy struggling just to take a breath; the next, an Arabic translation of Macbeth, with some of Saddam Hussein’s henchmen in bad-guy roles. As one Iraqi told me at a U.S.-funded art show in Dora, one of the most violent suburbs of Baghdad, “It is like I am standing naked in a room with a big hat on my head. Everyone comes in and helps put flowers and ribbons on my hat, but no one seems to notice that I am naked.”

Here are some of the wacky ideas we came up with to rebuild Iraq, and remember: These are the wacky ones that actually got U.S. taxpayer funding.

In the hands of one PRT in southern Baghdad, our instructions to help female entrepreneurs translated into pastry classes for disadvantaged Iraqi women who presumably could then go open cute little French cafes in their city’s bombed-out streets. In the funding request, the PRT stipulated that “a French Chef with experience in both baking pastries and in teaching pastry classes internationally” would volunteer to teach. So, you may ask, if the French chef was volunteering le time, what was the $9,797 spent on? Well, some was certainly spent on paying students to attend. It was almost impossible to get Iraqis to show up for these things (as they had to, if you wanted your photos of the event to look good) without offering a free lunch, taxi fare, and a stipend. Needless to say, I never heard of any pâtisseries sprouting up on the road to Baghdad’s airport. 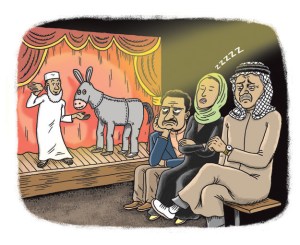 How to convince the Iraqis to abandon several thousand years of ethnic and religious sectarian hatred? One Baghdad PRT’s solution was to pay the local Iraqi artists’ syndicate to produce a play, Under the Donkey’s Shade. “The play focuses on an uproariously funny legal dispute that splits the people of a town into two groups,” the description in the funding report boasts. “The matter in dispute is the value of shade cast by a donkey. The message is clear: Don’t quarrel over minor differences. Those who see the play will get the message that political reconciliation is critical as we head into national election season.” The production was staged at least once to my knowledge, with some coerced locals in reluctant attendance; political reconciliation did not spontaneously flower.

In 2009, the U.S. Army hired a contractor to pave a short stretch of dirt road near the city of Salman Pak, with the idea of increasing commerce between two nearby neighborhoods. The contractor, however, took the money and laid down only gravel — which made the road just passable enough that insurgents started to use it as a transit route. The local residents appealed to the police, who set up barricades, ending what little commerce the original dirt road had sustained.

One PRT hired a local artist to paint a mural on the side of a gym near Sadr City. The purpose was to “provide an aesthetically pleasing sight upon entry, helping to bring a sense of normalcy for the citizens in the area and for those passing through.” What we ended up with instead was a group of oiled, homoerotic Steve Reeves musclemen. 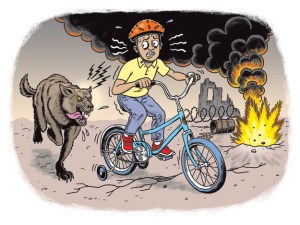 At one point the State Department bought 225 children’s bicycles from a Jordanian middleman, some with training wheels, to give away near Sadr City, an impoverished Shiite area of Baghdad. The idea was to replace streets filled with trash, pockmarked with shell craters, and ruled by wild dog packs with kids biking to each other’s houses, a sort of Mayberry on the Tigris. But it was quickly clear that riding the bikes would be impossible on the destroyed and dangerous roads. Later, I saw some wheels from the bikes being used on wheelchairs for injured Iraqi kids.

Tasked with community-building on Baghdad’s outskirts, my PRT decided to publish a calendar illustrated with Iraqi children’s art. First, a local women’s association was paid to conduct an art contest for the area’s children. Refreshments were served, and the 12 best works were printed on the 1,000 calendars made and distributed — some within the neighborhood, but most to other State Department officials. I left mine behind in Baghdad.

As part of a joint effort with the Army and the U.S. Agriculture Department to revitalize Baghdad’s zoo, the State Department paid for computers and Internet service, ostensibly so that the zoo’s veterinarians could establish online relationships with vets in the United States but also so that people could be shown on TV going to the zoo, sending a message that life was returning to normal.

For the same reason, Gen. David Petraeus sponsored a million-dollar Baghdad water park, unusable ever since the water pumps broke down. At the zoo, the now-defunct website’s chat room and Skype-like features devolved into a series of absurd internal discussions among the vets: Issues included whether to keep providing alcohol to the bears (it kept them docile) and whether to continue the daily throwing of live donkeys into the lions’ cage.

In a country with few land-line phones and a seriously toxic business environment, some Green Zone genius decided that economic success hinged on producing the first-ever Baghdad Yellow Pages. Even under pressure, we could come up with only 250 businesses that had permanent phone numbers in a city of several million people. My PRT was saddled with hundreds of copies of the finished product. We could not safely go door-to-door and so hired a local contractor, at seven bucks a copy, to give the books away. He dropped off a few copies here and there and likely dumped the rest behind some abandoned building.