Won it for: His "efforts to create peace in the Middle East"

Won it for: His “efforts to create peace in the Middle East”

Why it was a bad call: Arafat, seen as the father of the Palestinian struggle for statehood by his supporters and an unrepentant terrorist by his detractors, has a controversial legacy. What is clear is that throughout most of his career on the public stage, Arafat was a staunch supporter of the use of violence to achieve political goals. Or as he put it after the founding of the Palestine Liberation Organization (PLO): “Armed revolution in all parts of our Palestinian territory to make of it a war of liberation. We reject all political settlements.”

Fatah — Arafat’s faction within the PLO — was implicated in numerous armed attacks against civilians, both in Israel and abroad, including the 1972 Munich Olympics massacre and the 1985 hijacking of the cruise ship Achille Lauro. He maintained close personal relationships with dictators including Saddam Hussein and Idi Amin.

Arafat recognized Israel in 1988 and signed a number of peace agreements, including the 1993 Oslo Accords, for which he shared the Nobel with Shimon Peres and Yitzhak Rabin. But he rejected a proposed settlement at the 2000 Camp David Summit, raising questions about whether he was ever truly interested in peace at all. In the last years of his life, Arafat is believed by many to have helped plan the Second Intifada, a violent uprising against the Israeli occupation.

Won it for: Negotiating the Paris Peace Accords

Why it was a bad call: The 1973 award was one of the most controversial in history, with two Nobel Committee members resigning in protest. Le Duc Tho, Kissinger’s co-recipient, declined the honor on the grounds that peace was not yet achieved in Vietnam. In any event, the accords had little practical impact on the war. The ceasefire was continually broken and the fighting didn’t end until North Vietnamese forces overran Saigon in 1975.

Kissinger was a key player in some of the most controversial U.S. actions of the Cold War era. As Richard Nixon’s national security advisor, he supported the covert U.S. bombing campaign in Cambodia, which many blame for the rise of the genocidal Khmer Rouge regime. He backed military coups against leftist governments in Chile and Argentina. In a recently released Nixon White House recording, Kissinger, who fled Nazi persecution in Germany as a child, argued against pressing the Soviet leaders on their treatment of Jews, saying, “If they put Jews into gas chambers in the Soviet Union, it is not an American concern.”

Kissinger has notched some notable diplomatic victories as well — his role in negotiating an end to the Yom Kippur war, for instance — but even if you don’t share the assessment of some that Kissinger should be tried for war crimes, his record as a peacemaker is decidedly mixed. 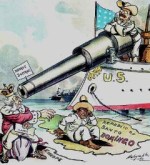 Won it for: Negotiating an end to the Russo-Japanese war in 1905

Why it was a bad call: Roosevelt is known for advising that American leaders “speak softly and carry a big stick,” but the Bull Moose was getting America into wars before he was even elected president. Following the explosion of the warship Maine on Feb. 15, 1898, the famously pugnacious Roosevelt, then assistant secretary of the Navy, took advantage of the fact that his boss was out of the office for the day to order U.S. naval forces around the word to prepare for battle and ask Congress to authorize a draft — effectively putting the country on a war footing without the consent of President William McKinley. When war did break out, Roosevelt resigned his post to personally take part in the fighting as a member of the Rough Riders, a volunteer cavalry regiment.

Then came “gunboat diplomacy”: As president, Roosevelt issued a corollary to the Monroe Doctrine authorizing the United States to intervene in order the stabilize the economic affairs of small states that were unable to pay their international debts. The Roosevelt Corollary was used to justify later U.S. military interventions.

In his post-presidency, he was a leading advocate of U.S. involvement in World War I. 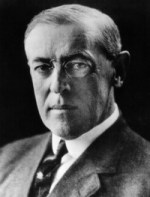 Won it for: Helping to found the League of Nations

Why it was a bad call: Wilson campaigned in 1916 on a “He Kept Us Out of War” platform, and then promptly got the United States into the war a year later. As for the League of Nations, his signature achievement, Wilson was not able to win approval for the organization in his own country, nor was the league able to prevent an even more brutal world war than the one that led to its creation.

Roosevelt and Wilson were political rivals throughout their careers, but Wilson followed his predecessor’s lead in Latin America, launching interventions in Mexico, Haiti, Cuba, and Panama, Nicaragua, Haiti, and the Dominican Republic. Wilson even ordered a little-remembered U.S. military intervention in Russia following the Bolshevik Revolution.

Back at home, Wilson was hardly a voice for social justice. During his term, Congress passed a law banning interracial marriage in the District of Colombia and Wilson himself ordered the segregation of several federal agencies. Wilson justified a new policy requiring applicants to federal jobs to present photographs, saying the hiring of African-Americans in the federal government could cause “friction.”

“It is as far as possible from being a movement against the Negroes. I sincerely believe it to be in their interest,” he said.

THE UNITED NATIONS AND KOFI ANNAN

Won it for: “Their work for a better organized and more peaceful world”

Why it was a bad call: The Nobel Committee cites Annan’s work in strengthening the U.N.’s partnerships with civil society, its renewed emphasis on development, and his advocacy for the founding of the Global Aids and Health Fund.

But Annan’s record also has a few notable black marks. During the 1994 Rwandan genocide, Annan was the director of U.N. peacekeeping missions. Canadian General Romeo Dallaire, who commanded the U.N. peacekeeping mission at the time, has accused Annan of holding back U.N. troops from intervening to stop the killing and watering down Dallaire’s reports to New York. Annan’s role was criticized in an internal U.N. review and he has apologized for failing to act more forcefully during the conflict.

A U.N. appointed panel also blasted Annan in 2005 for his mismanagement of the U.N. Oil-for-Food program, which ended up funneling $1.7 billion in kickbacks into the coffers of Saddam Hussein. The report also suggested that Annan’s son, an employee of a Swiss oil company, had benefited from his father’s position to obtain lucrative Iraqi oil contracts, though no evidence was found that Annan personally intervened on his son’s behalf.

Why it was a bad call: The IAEA’s award was seen by many as a rebuke of the George W. Bush administration’ s invasion of Iraq. ElBaradei and his agency had pushed for continuing the inspections process of Saddam Hussein’s weapons program.

Despite the organization’s noble intentions, it has not proven particularly effective at preventing the spread of nuclear weapons. Since its founding in 1956, five countries have gotten the bomb — India, Pakistan, Israel, North Korea, and South Africa, which shuttered its weapons program voluntarily — and Syria and Iran are believed to have made significant progress toward gaining them. Highlighting the ineffectiveness of the IAEA’s agenda, three of those countries — India, Pakistan, and Israel — are members in good standing of the organization.

The IAEA also has a mixed record at promoting the safe use of nuclear technology. Following this year’s meltdown at Japan’s Fukushima Daiichi nuclear plant, the IAEA’s response was criticized as “sluggish and sometimes confusing.”

Won it for: “his extraordinary efforts to strengthen international diplomacy and cooperation between peoples”

Why it was a bad call: The awards committee raised eyebrows by giving the prize to Obama, a former one-term senator who had taken the oath of office just a few weeks before nominations were due. The new president himself acknowledged that “Compared to some of the giants of history who’ve received this prize — Schweitzer and King; Marshall and Mandela — my accomplishments are slight.” Obama also surprised many by devoting much of his Nobel lecture to a defense of the legitimate use of force.

Indeed, the Nobel seems to have been given to candidate Obama — the one defined by his opposition to the war in Iraq, promise to close Guantánamo, and pledge to foster dialogue with hostile governments — rather than President Obama, better known for the Afghan surge, a massively expanded drone war, military intervention in Libya, and the extrajudicial killings of Anwar al-Awlaki and Osama bin Laden. Not to mention that Gitmo’s still open and there’s been little progress made on Middle East peace.

These actions may all be justifiable, but they’re likely not what the committee had in mind.