How the West was won -- in the Middle Ages 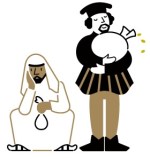 It’s one of the best-known but least understood of historical trends: Until the 13th century, the Middle East and North Africa were far more scientifically and economically advanced than medieval Europe. But while the European Renaissance was followed by the rise of capitalism and the Industrial Revolution, the Arab world stagnated for centuries. What happened?

The traditional view, held by early 20th-century theorists like Max Weber and modern historians like Bernard Lewis, is that cultural factors — Islam’s conservative nature, the “Protestant work ethic” — were the reason. But in a recent paper published in The Economic Journal, economist Jared Rubin pinpoints a more specific and potentially far more decisive factor: the Western ability to loan money at interest.

Both Islam and early forms of Christianity ban usury, defined as the charging of interest on a loan. In both cultures, businesses developed methods to get around the prohibition. A popular stratagem in early Islamic finance was the mukhatara, or “double-sell.” For example, a debtor might sell a creditor something for $100 and then immediately buy it back for $110 to be paid at a later date, the $10 becoming in effect a form of interest on the $100 loan.

Today, schemes like mukhatara remain the only legal way to charge interest in much of the Muslim world. But secularizing governments in the West gradually did away with the ban on usury during the 14th and 15th centuries, allowing them to develop the sophisticated banking services needed to generate capital for, say, building factories or funding massive construction projects, Rubin says. The split might have come, Rubin points out, because Islam evolved as a binding social code, intimately entwined with the political systems it dominated and absorbed throughout the Ottoman Empire, whereas Christianity developed as a dissident movement separate from the political institutions of the Roman Empire.

So how, then, to account for today’s booming Islamic economies in the Persian Gulf and Southeast Asia and billions of dollars invested in so-called “sharia-compliant” financial services? Rubin considers these new methods just variants on the age-old workarounds, but not enough to propel Islamic economies past Western GDPs. If you get left behind in the Middle Ages, it takes more than a few shortcuts to catch up to the future.

A New Comic Exposes Racism Amid the Pandemic in Brazil