How we found Muammar al-Qaddafi's secret trove of private photographs -- and what they tell us about his long, sordid, and curious rule.

For exclusive photos from the Qaddafi family scrapbook, click here.

The glass crunched under our boots as we walked through the abandoned compound of Muammar al-Qaddafi's military intelligence headquarters in Tripoli. It was late August, and the city had just fallen. Pancaked buildings destroyed by NATO airstrikes littered the grounds, and we entered one of the remaining undamaged buildings. For months now, we had followed the rebel offensive in Libya, monitoring the conduct of both the rebels and the Qaddafi loyalists, as well as NATO. Along the way, we were also working to ensure that the intelligence archives of the Libyan state were quickly secured and not looted or burned, as we knew they contained important answers about what had happened in the secretive country over the past 42 years of Qaddafi rule. 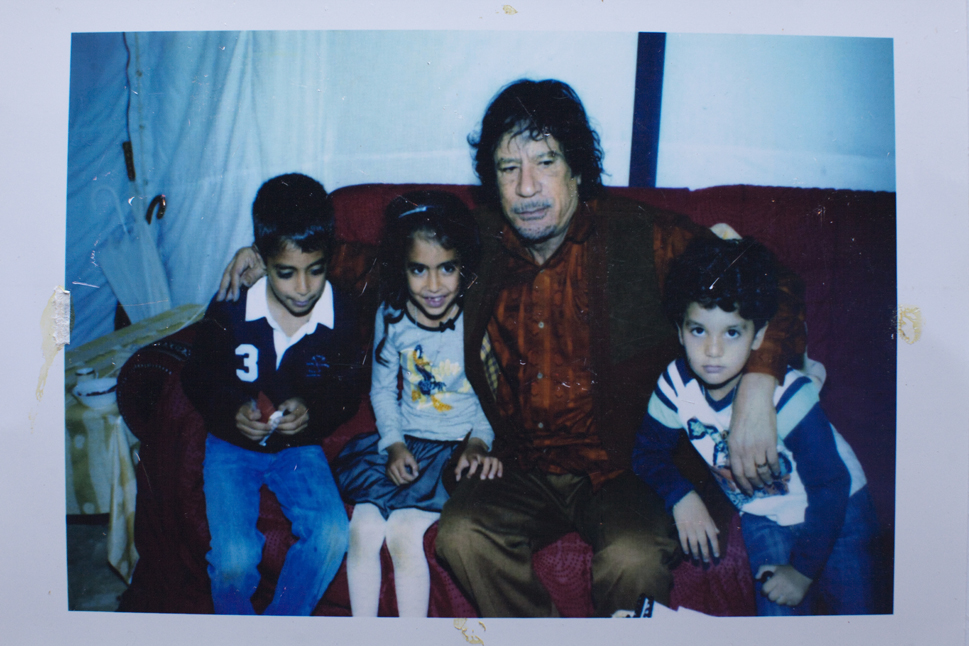 For exclusive photos from the Qaddafi family scrapbook, click here.

The glass crunched under our boots as we walked through the abandoned compound of Muammar al-Qaddafi’s military intelligence headquarters in Tripoli. It was late August, and the city had just fallen. Pancaked buildings destroyed by NATO airstrikes littered the grounds, and we entered one of the remaining undamaged buildings. For months now, we had followed the rebel offensive in Libya, monitoring the conduct of both the rebels and the Qaddafi loyalists, as well as NATO. Along the way, we were also working to ensure that the intelligence archives of the Libyan state were quickly secured and not looted or burned, as we knew they contained important answers about what had happened in the secretive country over the past 42 years of Qaddafi rule.

Just a few days before, we had struck gold. While looking through one of the office buildings of Qaddafi’s foreign spy chief, Musa Kusa, who had defected during the war, we came upon a treasure trove of faxes from the CIA and the British MI6 discussing the capture and rendition of Libyan Islamists back to Libya in 2004, where they were certain to be tortured under interrogation. After years of documenting the war on terror’s campaign of rendition by interviewing the Islamists who had been victim of the policy, we now had the CIA and MI6 in their own words.

Our project to secure the archives of the Libyan state was a race against time: Libyans were finally able to vent their fury against the police state that Qaddafi had built, and all too often, that fury involved burning down and tearing apart any symbols of the regime — particularly the buildings of the loathed security agencies. We arrived in the eastern city of Benghazi in late February, just days after the Libyan revolution had begun there. Control of eastern Libya had been wrenched from the security services after days of arrests and shootings of demonstrators by Qaddafi’s forces, and we found state buildings all over the city still smoldering, burned to the ground by angry mobs. It was as if somehow, the now-free Libyan people, then still under threat of a military offensive by Qaddafi loyalists to retake eastern Libya, believed that they could somehow hold off Qaddafi’s return by burning down the symbols of his feared police state.

The Human Rights Watch teams didn’t seek to haul off the files we were trying to preserve — those belong to the Libyan people. In any case, the files of a state which had just about all of its citizens under surveillance were just too massive to haul away. We quickly photographed what we thought relevant, and then worked with Libyan lawyers and rebel representatives to impress upon them the importance of securing the archives, as they surely held answers to some of the mysteries from Qaddafi’s 42-year rule. There were so many unsolved mysteries. No one knew what had happened to the bodies of the roughly 1,200 prisoners who were mowed down at the Abu Salim prison in Tripoli in 1996, after they protested their detention conditions, for one. Somewhere in the files, there should be answers. Unfortunately, two rooms with documents at the prison were already smoldering when we arrived.

While our search focused mostly on intelligence documents, we noticed that the archives contained rooms literally filled with photographs and films documenting Qaddafi’s rule. The photographs were of little interest to our Libyan guides, who had been saturated with Qaddafi’s omnipresent image and exploits during his long rule. Unlike with the intelligence documents, which revealed secrets that they had not been privy to, our Libyan friends could not understand why we foreigners found images of Qaddafi, well, being Qaddafi, so fascinating. On a number of occasions, we had to stop of Libyan counterparts from reflexively tearing up any image of Qaddafi that we came across — another popular cleansing ritual in the new Libya.

One day in March in Benghazi, Idriss, one of our dearest Libyan contacts came to our hotel with a plastic bag filled with photographs. He shrugged his shoulders as he handed me the bag, explaining that it contained a bunch of black and white prints he had rescued from an intelligence archive as it was being set on fire. I knew he was telling the truth as soon as I opened the bag — the sharp smell of smoke hit me. As I looked through the pile, I immediately saw how important it was to preserve what Idriss had just handed us: one of the first prints I thumbed through was of a jubilant young Qaddafi greeting his hero, the nationalist Egyptian President Gamal Abdel Nasser on the tarmac at Benghazi. Seeing my enthusiasm, Idriss just shrugged and said he had piles more at his house, “but they were all of Qaddafi.” More interesting, he suggested, would be to come to his house for a homemade lunch, a respite from the daily chicken and soggy fries at the hotel. I eagerly agreed.

The next morning, we headed over to Idriss’s house, accompanied by our photographer friend, Tim Hetherington, and started a fascinating journey into the personality cult built by Qaddafi. Sadly, we lost Tim along the way: he and his fellow photographer Chris Hondros were hit by a mortar shell in Misrata on April 20, and died from their wounds. In a way, every time we find more images of Qaddafi to photograph, more archives to secure, we think of Tim and his quest to teach us what images can tell us.

By now, our collection of images of Qaddafi’s rule number in the thousands. The photo albums and the images themselves belong to the Libyan people — and our role is to ensure their survival for now, working with the new Libyan rebel government. Aside from some rolls of negatives and aging film that were temporarily removed from Libya to be scanned and since returned, all of the images in our growing collection were photographed where they were found, and left in the archives.

While it is important that the archives from the Qaddafi era remain in Libyan hands, the history they illuminate are relevant to us all. They tell a story of Qaddafi’s private and public personas, of a cruel tyrant and a warm father, of weddings and state functions, grand speeches and afternoons with the family.

In conjunction with Foreign Policy, we’ll be presenting hundreds of these never-before-seen photos, building an online archive for scholars, historians, and curious readers.

The archives actually begin in the era of King Idris, the last ruler of Libya, who was overthrown in a bloodless coup in 1969 led by the young Qaddafi. The red, green, and black flag of King Idriss has now been reclaimed by the Libyan revolutionaries as the symbol of their revolution, but the pomp, inefficiency, and sheer corruption of the rule of King Idris is what led to Qaddafi’s then-popular revolution. The images of Queen Fatima, the wife of King Idris, in modern dress, looking somewhat like a Libyan Jackie Kennedy, are particularly striking when seen alongside the current debates in Libya about the role of women in government.

As expected, Muammar al-Qaddafi is the one constant in the archive, and the photos tell the story of his spectacular rise and the tragic consolidation of his personality cult that followed. The handsome, young Qaddafi stands in the midst of the soon-to-flounder waves of Arab nationalism as he first comes to power, sharing the stage with Nasser and the Sudanese leader Gafaar Nimeiri, addressing massive crowds. Or on the beach or in a military bunker, planning for revolutions around the world.

Over the years, Qaddafi becomes the ultimate victim of his own personality cult. In the images from his Green Book conferences and visits with fellow leaders in the Arab world and beyond, he seems bizarrely out of place, a bit too flamboyant to fit in. The hairdo he sports when visiting Syria’s dour Hafez al-Assad just seems a bit too wild, the enthusiasm of the crowds at his rallies and speeches just a bit too fabricated, and his own admiring smile looking at images of himself at a local trade show just a bit too self-indulgent. And then there’s the physique — long gone is the lithe and toned young colonel, in his place a paunchy middle aged man, the worse for wear, in sweatsuits and slippers.

The images we found are not just of Qadaffi himself: in the archives, we also found evidence of the strong-hand tactics he used to stay in power. Back in Benghazi, we were given a set of ancient Betamax videotapes that were recorded back in the mid-1980s, showing an infamous public trial and hangings at a sports stadium that signaled the beginning of an intensely repressive period of Qaddafi’s rule. Other images show hangings in the Benghazi harbor, beaten prisoners, smuggled weapons, and the mug shots of detained Islamists. Those too are an integral, if more brutal, part of understanding the nature of Qaddafi’s regime.

NEW FOR SUBSCRIBERS: Want to read more on this topic or region? Click + to receive email alerts when new stories are published on Economics, Africa