What makes this blog fun to do: A robust exchange between Hammel and Hunter about the meaning of that Marine photo

I really liked this exchange between “Hunter,” whom we know to be an Army officer, and Eric Hammel, about Hammel’s guest column Monday about his favorite Marine photo of World War II. I don’t know who is correct, but both made me think. I suspect Hammel may be right here. I remember a guy who ... 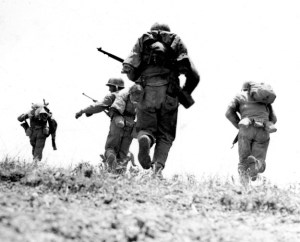 I really liked this exchange between “Hunter,” whom we know to be an Army officer, and Eric Hammel, about Hammel’s guest column Monday about his favorite Marine photo of World War II. I don’t know who is correct, but both made me think. I suspect Hammel may be right here. I remember a guy who had been an intelligence officer in the Pacific in World War II recounting how he decoded a message and saw that he was going to be involved in the planned invasion of Japan. He thought, Well, that’s it, I am going to die this year. Then he vomited.

I wonder if a counterintuitive metric of blog quality is how often the comments are better than the average post. (Speaking of blogs, wouldn’t “The Burn Pit” be a good name for a blog about daily life while deployed to a combat zone?)

While it’s nice to think well of these folks, and they certainly did their job and did it well…but I can’t help but think, through my cynical eyes, that the thoughts running through these guys heads were “1) this shit sucks 2) we’re all gonna die 3) we’re skylining like mofos.” In no particular order.

I thought about the above comments all day. What I conclude is that you don’t think the way American troops in the Pacific thought during the spring of 1945. This takes nothing away from your experience, and it adds nothing to theirs. The times are not the same.

The men in the photo knew that they were nearing the end of a long war. They thought they would die on Okinawa or Kyushu or Honshu, so they felt they had little to lose by rushing across open ground or a skyline. In fact, getting killed or wounded on any day on Okinawa was better than the pain of living in order to be killed or wounded later. My father, who had barely escaped the claws of the Holocaust and had already fought on Leyte, ended eighteen days in the line on Okinawa with a shattered hand. He felt for the rest of his long life as if, by virtue of just the last, he had won the ultimate lottery.

The Japanese on Okinawa had built a hedgehog defense within a hedgehog defense in twisted hill country composed of one skyline after another. They knew what they were about. Once the Americans engaged the outer hedgehog, they were all in a war of attrition. But the Japanese had no recourse to troops–or anything–that wasn’t on Okinawa on the first day of battle. The Americans had unlimited resources to bring up and bring in as needed, which they did–two army infantry divisions and a Marine regimental combat team were added to the original Tenth Army OOB. Both sides knew how the cards had been dealt. The four Marines in the photo knew it. So the thing I think the four were going over in their heads were: Can I drop fast enough if the other side opens fire? If not, will it be quick? Because, with me or without me, we are winning.

Thomas E. Ricks covered the U.S. military from 1991 to 2008 for the Wall Street Journal and then the Washington Post. He can be reached at ricksblogcomment@gmail.com. Twitter: @tomricks1
View
Comments
Tags: History, Military, Photographs