The New York Times columnist has a lot to say about other Thinkers. Here's a small sample. 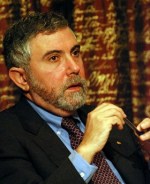 Let’s start with S.& P.’s lack of credibility. If there’s a single word that best describes the rating agency’s decision to downgrade America, it’s chutzpah — traditionally defined by the example of the young man who kills his parents, then pleads for mercy because he’s an orphan.

Mr. Bernanke is allowing himself to be bullied by the inflationistas: the people who keep seeing runaway inflation just around the corner and are undeterred by the fact that they keep on being wrong.

What have they done with President Obama? What happened to the inspirational figure his supporters thought they elected? Who is this bland, timid guy who doesn’t seem to stand for anything in particular?

The Cameron plan was based on belief that the confidence fairy would make everything all right. But she hasn’t: British growth has stalled, and the government has marked up its deficit projections as a result.