The Titan of Tbilisi

I am standing in the foyer of my hotel in the Georgian capital of Tbilisi. An unshaven young man with an enquiring expression comes up to me and asks, “Thomas?” I nod and he says the one word, “Bidzina.”

My assignation with the most talked-about man in Georgia is about to begin.

We climb into a Toyota Landcruiser, ascend to the top of a hill in Tbilisi, and then enter a small private drive. Electronic gates slide open and we are soon outside a soaring glass-and-steel construction, a futurist castle constructed by the Japanese architect Shin Takamatsu, surrounded by a small forest of modern sculpture.

I am ushered into the presence of the man himself. Bidzina Ivanishvili is quite small, a little elfin, immaculately dressed, and smiling. I have never interviewed a billionaire before but his manner is easy. He starts by showing me the pictures on the wall: Egon Schiele, Claude Monet, Lucian Freud. He admits that they are, in fact, high-quality copies; the originals are in London. There is a chatty simplicity about him but also huge self-confidence and self-control.

We sit down, he under a Lucien Freud portrait, and I ask a variation on the same question he has been asked 100 times in the last month: “What motivated you to go into Georgian politics?” 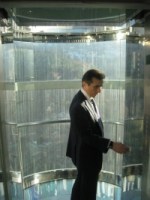 In one month, it is no exaggeration to say, Ivanishvili has turned the politics of his country upside down. Georgia has had a turbulent decade. First, the peaceful Rose Revolution of 2003 swept aside Eduard Shevardnadze’s tired old regime. Then, Mikheil Saakashvili became Europe’s youngest head of state at the age of 36 and embarked on a series of hair-raising modernizing reforms. The volatile Saakashvili also went head-to-head with Russia over the breakaway regions of Abkhazia and South Ossetia, a confrontation that burst out into full conflict in 2008. After defeat in the war, Saakashvili’s popularity plummeted, but he clung to power. He and his governing party slowly recovered the initiative and, as the next elections approached in 2012-13, they found themselves again in a commanding position, with a virtual monopoly over the executive, parliament, local government, and the media.

Enter the tycoon. After making a fortune in Russia (now estimated by Forbes to be worth $5.5 billion), Ivanishvili retired to his home village in central Georgia, becoming an aggressive philanthropist to schools, theaters, churches, professional artists — all without ever appearing in public. He was so private that he was dubbed the “Count of Monte Cristo.” In an eccentric twist to the tale, his son Bera moved to Los Angeles and became Georgia’s most famous rapper, for a while eclipsing the fame of his father.

Then, out of seemingly nowhere, on Oct. 7, Ivanishvili announced that he was entering politics, challenging Saakashvili, and planned “to come to power” in next year’s elections.

When I arrived in Georgia a month later, two-thirds of all conversations were still about the Ivanishvili effect. 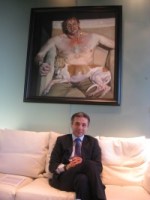 For the last year or so, the ten to 12 people I regularly talk to in Tbilisi (a mixture of old friends, journalists, academics, and long-time resident foreigners) had been saying roughly the following:

“The governing party has done many good things but they are too focused on preserving their own power and have lost touch with the public. They confuse their PR message with reality. A lot of people are fed up — in Tbilisi, by the narrowing of the democratic space, and in the countryside by the lack of jobs. But the opposition is marginalized and there is no credible alternative.”

Now, my friends were fascinated and energized by this challenge to the status quo. But there was less agreement on Ivanishvili himself. A range of opinions:

“He has re-written the rules of the game and that’s good for Georgia.”

“People had become so cynical. Now they have some hope.”

“At the moment he is a one-man show. The test is whether he can build a platform and a program.”

Ordinary Georgians I talked to were almost worryingly enthusiastic. My very unscientific vox pop of taxi-drivers and non-political acquaintances found ten people out of ten supporting the businessmen. From this group, I heard one phrase repeatedly: “He has done so much for Georgia.”

The government’s initial responses to the tycoon’s demarche were hostile and self-defeating. The authorities stripped him and his wife of his Georgian citizenship on controversial grounds, prompting him to appeal directly to the president for its restoration. Ivanishvili has received the support of no less than the Patriarch of the Georgian Orthodox Church, who in his Sunday sermon said that this patriot deserved his citizenship back. The government has also tried to discredit Ivanishvili with an aggressive investigation into his Georgian bank, while pro-government media attempted to sabotage the live press conference where he announced his political debut. Both efforts backfired dramatically, confounded by a groundswell of pro-Ivanishvili support and widespread distrust towards the government’s version of events.

It made for a dramatic month in Tbilisi. Something had been lacking in Georgian public life — Ivanishvili had woken it up. But, as academic Giorgi Gogsadze told me, “It is more about the phenomenon of Ivanishvili than the personality.” In other words, he is seen first as an agent of change and only second as a distinct individual.

But the personality has to matter sooner or later. And here I am with 90 minutes to talk to the man himself.

To the “why” question he gives a long answer. He supported the current government on many issues and met Saakashvili many times up until 2008. He financed the army and schools. But he broke with the government because he believed that Saakashvili stole the 2008 presidential election, and began to “study” the opposition. When he realized that they were not making a breakthrough, he decided to step in. “If the opposition could have done this and come [to power] without my help, of course I would not have come. As the opposition can’t do it on its own, I am helping the opposition to come to power.”

He sees a fatigue in Georgian society: “These reforms are a shock for people. Every reform, every step puts people in shock.” What the government has created, he says, is “a façade economy, façade everything, just a Potemkin village.” Business is actually less free than it was under Shevardnadze, he contends, because the government has such tight control of revenue, media, and the courts.

I raise the issue of continuity. Georgians, I say, are tired of upheavals and want to be sure that if there is a change of regime, everything won’t start from scratch again. He agrees and says that there are many professionals who need to keep their jobs or “even be promoted.” But the three reforms he cites approvingly are relatively narrow ones: modernization of the army, and cleaning up corruption in the police force and education system.

What most alarms people about Ivanishvili is the steely certainty with which he declares that he will triumph. Georgia, I say, does not need another Messiah. Its last three presidents, Zviad Gamsakhurdia, Shevardnadze, and Saakashvili, have each been greeted in turn as the savior of the country. And each time the euphoria has yielded to disappointment when the leader in question failed to deliver.

Ivanishvili is expecting the question. “I tell my supporters ‘Don’t idealize me!'” he laughs. In his defense he points out that he has picked two independent and well-established opposition parties as allies, in particular that of Irakli Alasania, the pro-Western former Georgian ambassador to the United Nations.

Yet his prescription is characteristically radical — and all about himself. He says he plans to form a new government in Georgia, change the system — and then leave. “I will leave power quickly, I can guarantee you. You will meet me in two years’ time or later and you will see that I do not cling to power.”

Then there is the Russia question, which has polarized Georgia since the 2008 war. Any opposition figure who talks about improving relations with Russia risks being tarnished as unpatriotic by the pro-government media. Ivanishvili does his best to pick his way through this minefield.

“One the one hand the Georgian people are hurt after the August war. Whoever was responsible, Russia was definitely in the wrong for the huge aggression it perpetrated against the Georgian people,” he begins. He goes on: “On the other hand, I understand very well that we mustn’t dramatize this, we mustn’t personally curse them, as Saakashvili does. My team and I, we will be forced to immediately begin talking to them, to get out of this situation of stagnation.” He claims that he has already begun selling off his assets in Russia, which he expects to fetch some $1.5 billion.

After our conversation, I received a tour of the building and the art collection. In one of the biggest rooms, virtually the only piece of furniture was a Steinway piano. (“My whole family plays,” he said.) An immense glass window revealed a soaring vista, a hulking bronze sculpture of unfolding leaves by the French artist Bernar Venet then both Saakashvili’s new presidential building and the Trinity Church, the biggest in Georgia, which Ivanishvili has financed. I couldn’t help feeling that I wished Georgia was not so reliant on big personalities: Saakashvili, the Patriarch, and the billionaire I was standing next to. 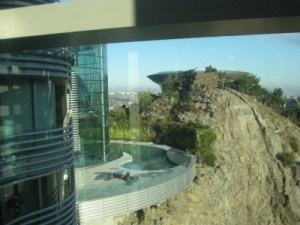 He makes for a fascinating and enigmatic mix: Lucian Freud and the Orthodox Church, the L.A. rapper and the Patriarch, a business career in Russia and pro-Western political allies, reticence and steeliness. After 90 minutes with Georgia’s new phenomenon, he seems no one’s project but his own; sincere, but also that his answer to a problem — in this case a government he doesn’t like — is a one-man personal intervention is required to solve it. The program is still a work in progress.

And though it seems the Georgian political scene may benefit from a shake-up, I fear Georgians are embracing this new phenomenon because of his money and the hope that he can be another savior.

To put it another way, the issue is less Ivanishvili than Georgia itself and its expectations. It is a big test for a small country to cope with yet another larger-than-life personality, however sincere his intentions may be.