Newt Skywalker and the Moon Mirror

A guide to the Republican front-runner's far-out, futurist vision of warfare.

Former House Speaker Newt Gingrich, the surging candidate for the Republican presidential nomination, has been simultaneously lauded for his devotion to technological innovation, and ridiculed for his warnings about futuristic weapons.

Gingrich, who has dabbled in science fiction and cited both futurist Alvin Toffler and the concept of "psychohistory" in Isaac Asimov's Foundation novels as intellectual inspirations, has long been dubbed "Newt Skywalker" thanks to his vision of future warfare that blends fact and fantasy. This streak of futurism is, by his own admission, rooted in a political and philosophical belief about technology and power. ''I would rather rely on engineers than diplomats for security,'' Gingrich told Aviation Week & Space Technology magazine in 1994, in reference to his support for missile defense. 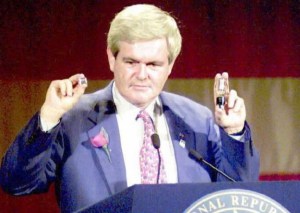 Former House Speaker Newt Gingrich, the surging candidate for the Republican presidential nomination, has been simultaneously lauded for his devotion to technological innovation, and ridiculed for his warnings about futuristic weapons.

Gingrich, who has dabbled in science fiction and cited both futurist Alvin Toffler and the concept of “psychohistory” in Isaac Asimov’s Foundation novels as intellectual inspirations, has long been dubbed “Newt Skywalker” thanks to his vision of future warfare that blends fact and fantasy. This streak of futurism is, by his own admission, rooted in a political and philosophical belief about technology and power. ”I would rather rely on engineers than diplomats for security,” Gingrich told Aviation Week & Space Technology magazine in 1994, in reference to his support for missile defense.

Not all his futurism is a bad thing. Many of Gingrich’s early ideas, such as encouraging the Pentagon to fund bureaucratically stripped-down “Skunk Works“–type innovation are laudable.

Sometimes his predictions have even panned out, sort of. Some 25 years ago, Gingrich promised that “tourism in space is coming.” This week’s announcement of the Burt Rutan and Paul Allen plan to build a massive commercial space plane is a reminder that such a future, while not yet here, is likely on the horizon. (though it appears that the “Hiltons and Marriotts of the solar system” that Gingrich also predicted are not yet in those companies’ business development plans).

When it comes to predicting the future of warfare, the devil is usually in the details. Gingrich in 1995 warned of a growing “Islamic totalitarian terrorism.” But he was worried about Iran, not terrorists setting up camp in Afghanistan. He also, in that same speech, worried about another attack on the World Trade Center, but his focus wasn’t box cutters and commercial aircraft, but a nuclear weapon.

When it comes to futuristic weapons, Gingrich’s record is mixed. Here are a few of his more notable predictions:

Electromagnetic pulse (EMP) has long been Gingrich’s pet boogeyman. In a recent debate, he described an “electromagnetic pulse attack which would literally destroy the country’s capacity to function” as one of the three greatest threats to the United States — along with cyberattacks and weapons of mass destruction falling into the hands of terrorists. The idea is that a pulse generated by a nuclear explosion in the upper atmosphere could fry electronics over a wide swath of Earth. Not only would such a weapon theoretically take out the electricity grid, but it would also turn your computer, smartphone, and pretty much every other electronic device into a paperweight, taking the United States back to the preindustrial age.

A number of scientists have questioned whether an EMP bomb would have the massive effects claimed by Gingrich and others. More importantly, they point out that the threat of a nuclear weapon in the hands of a terrorist is a greater likelihood and much easier given that an EMP attack would likely require a ballistic missile to detonate it at the proper height. For all the ridicule and contempt heaped on EMP bombs, however, an increasing number of scientists are now warning that solar storms could have effects similar to the dreaded magnetic pulse and that many of the same measures for staving off the effects of an EMP attack, such as hardening the electric grid, apply equally to solar storms. At least for Gingrich, the sun makes a less menacing enemy for public consumption than the superbomb.

In an interview with the television program Frontline in 2002, Gingrich spoke about “directed energy weapons and laser pulsing systems” that would shoot beams of energy from space. The remark wasn’t exactly a surprise: In the 1990s, he helped lead the charge to revive Ronald Reagan’s vision of a missile shield to include space-based weaponry. But the space-based laser, one of the last elements of the old “Star Wars” vision, was formally canceled in 2002 amid concerns about the cost and complexity of operating a laser in orbit.

Gingrich’s prediction that same year was that such weapons would be possible within the next 10 years. It’s nearly 2012, and the great, space-based pulsing laser system is nowhere to be found. 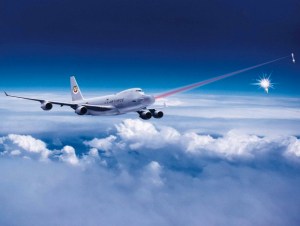 In 2009, Gingrich proposed blasting North Korea with a laser as a last-ditch way of dealing with its nuclear arsenal. “I think you could take it out with very, very minimal risk to anybody,” he told Fox News. The idea sounded like science fiction, but it was in fact a notion that had been promulgated by the Pentagon establishment for years. Indeed, by 2009, the Defense Department had already spent billions of dollars building the Airborne Laser, a chemical laser equipped in the nose of a Boeing 747 that was designed to hit a nuclear-tipped ballistic missile in its boost phase. Although the concept of such a laser is not pure fantasy, actually operating one still is. But the prototype in tests has a mixed track record at best.

Not long after Gingrich’s proposed North Korean laser strike, then Defense Secretary Robert Gates moved to cancel the Airborne Laser program. In explaining his decision to Congress, Gates said there was “nobody in uniform that I know who believes that this is a workable concept.” Actually employing the laser would require a fleet of 10 to 20 Boeing 747s because the concept of operations would require having them fly constantly, ready at a moment’s notice to intercept a missile attack. To make matters more complicated, a plane “would have to orbit inside the borders of Iran in order to be able to try and use its laser to shoot down that missile in the boost phase,” Gates said. 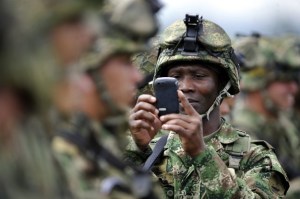 Smartphones on the Battlefield

In 1995, Gingrich said in a speech at a defense industry conference that by 2010, soldiers on the battlefield would be equipped with telephones that would function as personal computers, “so during lulls they can arrange a date” or, presumably, order in airstrikes. In terms of the technology, Gingrich’s prediction was not that far off given the growing prevalence of smartphones in military use (though his idea of parents watching battles live through their children’s phones is somewhat disturbing). Writing in the New York Times of the Gingrich idea at the time, Nicholas Wade called it “absurd in its specifics.” 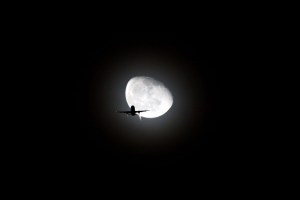 Gingrich’s love of space has long been known. He has mused about moon colonies and honeymooners enjoying the romantic benefits of zero gravity. He has advocated for the constitutional rights of space territories. And he has proposed, somewhat amusingly, for a lunar space mirror that would light up dark alleys to “reduce the current danger of criminals lurking in darkness.” “Well, O.K., but I’m still leaving the front porch light on at night,” wrote Christopher Buckley in the New York Times in 1995.