A century and a half of an idea whose time has never come.

It might be the last truly bipartisan policy aim in Washington, and the least plausible one: Every U.S. president since Richard Nixon has pledged allegiance to the goal of “energy independence,” even as the United States has remained dependent on imported oil. And as China’s appetite for fossil fuels surpasses America’s, energy anxiety has gone global — just in time for another presidential election year.

1865
In The Coal Question, British economist William Stanley Jevons warns that Britain is in danger of running out of coal, threatening the country’s strategic and economic preeminence — a matter, he writes, of “almost religious importance.”

1912
Winston Churchill, then first lord of the admiralty, begins converting Britain’s Royal Navy — the world’s largest-from coal to oil, exchanging energy independence for power and speed. Over the next several years, Britain wrestles the oil fields of the Persian Gulf away from a crumbling Ottoman Empire.

1971
Oil production in Texas, the motherland of U.S. crude, begins to decline. “Texas oil fields have been like a reliable old warrior that could rise to the task when needed,” Texas Railroad Commission Chairman Byron Tunnell says. “That old warrior can’t rise anymore.”

1973
April: In a Foreign Affairs article titled “The Oil Crisis: This Time the Wolf Is Here,” James E. Akins, who would become U.S. ambassador to Saudi Arabia that fall, warns that “the threat to use oil as a political weapon must be taken seriously.”

October: Egypt and Syria launch a surprise attack on Israel, beginning the Yom Kippur War. The United States responds with $2.2 billion in arms and aid to Israel. The following day, OPEC declares a halt to oil shipments to the United States, Western Europe, and Japan. By January 1974, oil prices have more than quadrupled.

1975
The U.S. Congress passes the Energy Policy and Conservation Act, creating the Strategic Petroleum Reserve and imposing the first fuel-efficiency standards for vehicles.

1977
U.S. President Jimmy Carter makes energy independence the central ambition of his presidency, later establishing the Department of Energy, investing billions of dollars in research and development, and installing solar panels at the White House.

1979
An uprising topples Iran’s Mohammad Reza Pahlavi and one of the two pillars of U.S. energy supply in the Middle East crumbles, leaving only Saudi Arabia.

1994
For the first time since the 1910s, the United States imports more oil than it produces. Deputy Energy Secretary Bill White describes the situation as “the biggest trade problem we have.” 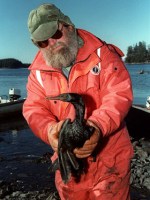 2005
Congress passes the Energy Policy Act, including quotas and millions of dollars in subsidies in hopes of nearly doubling U.S. ethanol production by 2012.

2007
Congress passes the Energy Independence and Security Act, which .imposes tougher fuel-efficiency standards on vehicles and orders a whopping 766 percent increase from 2007’s targeted biofuel production by 2022. By 2008, ethanol has become a $32 billion business in the United States.

September: At the Republican National Convention, Michael Steele calls on Americans to “reduce our dependency on foreign sources of oil and promote oil and gas production at home. In other words: Drill, baby, drill!”

A weak economy and more efficient vehicles cause oil imports to fall below half of U.S. consumption for the first time in 13 years.

2011
The International Energy Agency predicts that the European Union will surpass the United States as an energy importer by 2015.

Thanks to John Deutch of the Massachusetts Institute of Technology and Michael Graetz of Columbia University.

How High Will the U.S. Unemployment Rate Go?