According to the Catholic Relief Services, food aid can still do a great deal of good. 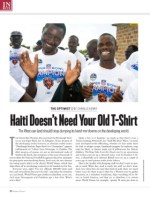 Charles Kenny (“Haiti Doesn’t Need Your Old T-Shirt,” November 2011) is right when he criticizes sending unneeded items to those caught up by disasters or poverty in the developing world. Humanitarian agencies like mine — Catholic Relief Services (CRS) — all have tales of receiving goods from well-meaning people who do not understand that even if the items were needed (which they rarely are), the cost and logistics involved in shipping them exceed their intrinsic value.

Kenny goes too far, however, in dismissing the entire U.S. food aid program. Certainly if we started today from scratch, we would not design the program exactly as we find it, but U.S. food aid does do a great deal of good. Right now it is helping millions of people in drought-stricken East Africa. In Zimbabwe, it is feeding more than a million people caught up in political dysfunction. It is feeding people in Darfur, in many countries in West Africa — indeed all over the world.

Is giving cash always better, as Kenny maintains? No. It can be, but there are times and places where markets do not function or cannot provide sufficient nutrition. At CRS, we monitor markets to ensure that food and other aid is not damaging local commerce. We sponsor voucher distributions, seed fairs, and local food purchases to stimulate markets. We work with local farmers to get their food to buyers in order to help them escape poverty as they contribute to the local economy. In other words, we recognize and appreciate the market’s power. Our work takes into account the direction of Kenny’s criticisms.

A half-century ago, CRS conducted clothing drives. We don’t do that anymore. Changes in the world economy mean that donated clothing is rarely if ever needed. Maybe one day the same will be true of food. Sadly, that day has not arrived.

Catholic Relief Services provides amazing and invaluable assistance around the world and works hard to maximize the good while minimizing the harm created by the dysfunctional U.S. food aid program. That work, however, would be far easier if the link between supporting humanitarian responses and U.S. agricultural and shipping policies were broken.

The requirement that much of U.S. humanitarian assistance has to be food grown in the United States, and then transported on American ships, makes the program a slow, expensive, and woefully inefficient form of aid in nearly every case. Even in those crisis situations in which part of the right response might involve bringing in food rather than money, how often is Baltimore or Los Angeles the closest place to buy that food?

CRS is forced to work with the system as it is. As Bill O’Keefe diplomatically puts it, “We would not design the program exactly as we find it.” Surely the food aid program we’ve got is in some situations better than the option of no humanitarian assistance at all. Apparently, that’s about all even its supporters can say for it. The program is long overdue for reform.