A son's tale of a death ripped from the headlines -- and the novel that foretold it. 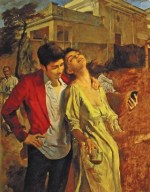 In December 2010 I sent off the changes to my first work of fiction set in Pakistan. I should say published work because really I was concluding a writing cycle that, having begun 10 years before with a failed novel, had led me to nonfiction and memoir before bringing me full circle back to the novel. The looping lessons of this journey were what formed my earliest ideas of fiction and nonfiction in the special context of writing about Pakistan, a place where reality often dwarfs the best efforts of the imagination.

My relationship to the country has always been a complicated one. My father was Pakistani, but I had grown up away from him in New Delhi with my mother and had known neither him nor his country until the age of 21, when I first went to Lahore to seek him out. That time of great personal upheaval coincided with my first wish to be a writer, and knowing next to nothing about the mechanics of fiction but seduced by its glamour, I sat down to write a novel about the experience.

It was an abysmal failure, a baggy black hole of a book. I tried to calm my well-founded fears about it by taking comfort in the urgency and relevance of the real-world circumstances that had inspired the novel. But no outside reality, no matter how compelling, can rescue a work of fiction that doesn’t work on its own terms. A writer needs distance if he is to create an autonomous fictional world in which the complexities of lived experience are distilled; he cannot still be in the throes of the experience he is writing about.

And I, age 22 or 23, was still very much consumed by the great drama of seeking out my father in adult life. It had not gone quiet; its overarching lines were yet to reveal themselves. In the end, after a considerable amount of self-delusion, I abandoned the novel — An Internment, I think it was aptly called — and from its salvageable remains I wrote and published in 2009 my first book, a travel memoir, Stranger to History, which was the story of my relationship with my father, interwoven with the account of an eight-month journey from Istanbul to Lahore.

Nonfiction, at the time, allowed me to state plainly my position as an insider-outsider in Pakistan. To write convincing fiction about a place, one must possess a deep, almost effortless knowledge of that place. One might even argue, as W. Somerset Maugham did in The Razor’s Edge, that “it is very difficult to know people and I don’t think one can ever really know any but one’s own countrymen.” But Pakistan was, in an important sense, my country. It was not only the place from where my father came; it was also the place from where my maternal family had come in 1947 as refugees to India; and until that Partition of 1947, India and Pakistan, especially the Punjab, had everything from language and literature to food, dress, and wedding songs in common. Still, 60 years of hermetically sealed separation is not a short amount of time; countries and societies can go their own ways. Pakistan was, as far as I was concerned, a sphere of both deep familiarity and unfamiliarity. Nonfiction allowed me to express the acute particularity of my lens without damaging the credibility of the writing.

Yet, a decade later, I returned to fiction. Why?

Pakistan, in recent years, has been fertile ground for the imagination. Mohsin Hamid’s Moth Smoke was the first work of fiction to capture, through the story of a young man who becomes its victim, the nihilism and violence of Lahori society. Daniyal Mueenuddin went further. In his book In Other Rooms, Other Wonders, he managed through eight exquisite stories of feudal life in Pakistan to express the country’s terrible underlying brutality. That same ability, of depicting one thing while actually suggesting another, can be found in contemporary Pakistani art as well. The young painter Salman Toor, for instance, invariably uses scenes of apparent merriment, of laughter, of frolic, to hint at darker, more menacing aspects of his society, such as rage and violence, cruelty and oppression. In his painting Paradise Villas, two lovers stand outside an ocher mansion in Lahore. The young woman, with long flowing hair, has thrown her head back against her lover’s shoulder. Seeming almost to swoon, she holds a glass of red wine in one hand, a mobile phone in the other. Servants lurk in the background, one watching sullenly from a distance, the other bringing drinks and ice on a silver tray. And there is nothing, except the hint of a darkening sky, casting a strange silver light over the scene, that can be pointed at to justify the deep unease one feels at seeing the painting.

It was unease such as this that brought me back, after the failed attempt 10 years earlier, to writing fiction about Pakistan. It is also perhaps what makes Pakistan — with the notable exception of V.S. Naipaul’s Among the Believers and Beyond Belief — a place better served in this time of uncertainty by fiction. Serious nonfiction books of recent years, such as Adrian Levy and Catherine Scott-Clark’s Nuclear Deception, Anatol Lieven’s Pakistan: A Hard Country, and Bruce Riedel’s Deadly Embrace, explain the political implications of the turmoil in Pakistan. What they don’t capture is the depth of the malaise.

That malaise had never been deeper than when Benazir Bhutto was killed in 2007. I was in Lahore at the time. The days that followed the death of Pakistan’s former prime minister were days of great emotion. The political landscape had in one stroke been made much bleaker. In a country swaying from trauma to trauma, it had produced an outpouring of grief, of breast-beating, riots, and mourning. But the intimation I had, the one I later found too subtle to express in nonfiction, was of catharsis. I felt that under the great show of emotion there lay a feeling akin to euphoria. It had something of the air of the 10th day of the Shiite mourning for Ali and Hussein, an air almost of carnival, where beneath the self-flagellation and tears, there is release. And it was this, the grotesque quality of those days, that drew me back to fiction.

At about the same time I encountered the story of the young scion of a rich Pakistani family, who after being blackmailed by someone in his office over a sex video, commits a spectacular act of violence against his blackmailer. I cannot say what made the story seem so quintessentially Pakistani: something in the cocktail of beards and sex, videotape and violence; something at once modern and medieval. The two things, the cathartic violence at the time of Bhutto’s death and the story of that young man, fused in my imagination. Three years later, reconfigured completely, they fought their way out in the form of a novel — Noon — my first set in Pakistan.

But fact and fiction rarely keep to their lines in Pakistan. A couple of weeks after the novel was sent to my publisher, my father, the governor of Punjab at the time, was assassinated by a member of his own security detail. And I, in New York, found myself outside a Manhattan deli staring down at my father’s 26-year-old assassin on the front page of the New York Times, trying hopelessly to separate the real from the surreal.

With my father’s death, the violence I had only an intimation of in 2007 — violence as release — came nakedly to the surface. His killer was showered with rose petals; billboards of him were erected throughout Lahore; men came to give food and money in thanks for what he had done; there were huge rallies of support demanding that he be freed.

Some of this I had anticipated in my novel. I wrote: “Outside a kind of orchestral violence reached its climax. Chants thundered and every now and then a pane shattered, drawing from the crowd a howl of euphoria.”

But Pakistan surpassed my expectations. And having only just returned to writing fiction, I found my imagination once again stilled before the unfolding of a new and uglier reality.