How IR scholars see the world.

Amid all the doom and gloom about declining U.S. power and respect abroad, Americans can take solace in the fact that their university system remains the envy of the world. But at a time when the United States faces a host of new challenges-from the Arab Spring to the global financial crisis-does anyone in power care what the academy thinks? A small circle of scholars makes their views known in op-eds and blog posts, or by taking sabbaticals inside the Beltway, but the views of most academics remain unheard in Washington.

So what does the Ivory Tower think about the pressing issues of the day? Below are some highlights of our 2011 survey of international relations scholars at U.S. universities. This year, for the first time, we also separately surveyed practitioners who have worked on national-security issues within the U.S. government-the people who run America’s foreign-policy machine. And from global warming to the rise of China, we found that the academics and the policymakers don’t always see eye to eye.

IR scholars take a broad view of the most important foreign-policy issues facing the United States. Thirty-two percent think this shortlist includes the rising power of China, up from 23 percent in our 2008 survey. Another 32 percent of academics rank the Arab Spring among the top three. But concerns about the global economy and monetary regulations, including the global debt crisis and the euro’s collapse, loom large.

Practitioners are even more alarmed than scholars about the rise of China, with 42 percent listing it as one of the most important issues facing the United States today and 54 percent regarding it as a pressing issue in 10 years. More policymakers than scholars worry about the global debt crisis, while the Arab Spring makes the list of the top three problems. But some security concerns remain more salient for policymakers than for scholars. 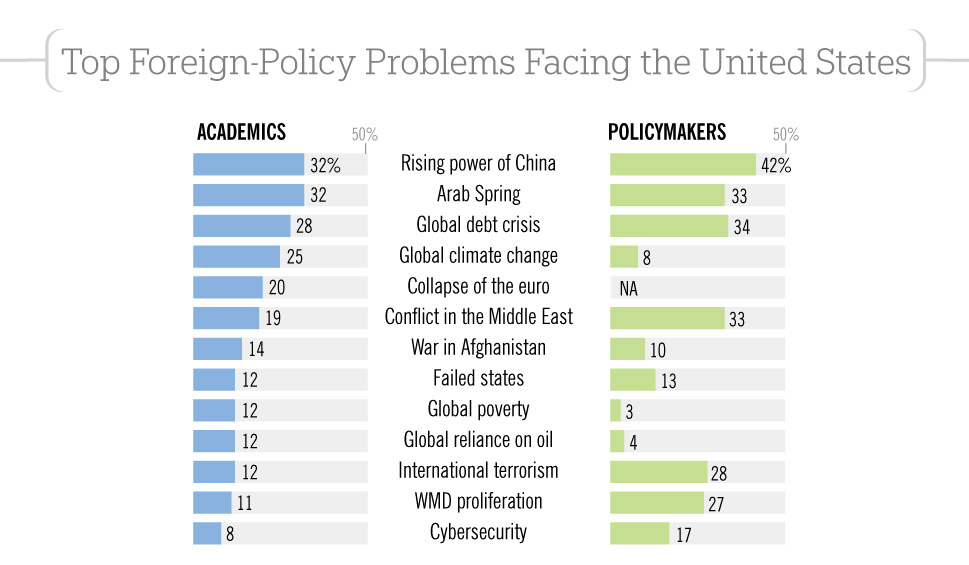 Arab Spring: Too Early to Tell

Despite the consensus among academics on the importance of the events of the Arab Spring for U.S. foreign policy, for much of the Ivory Tower it’s still too early to tell what the outcome of the Middle Eastern uprisings will be. 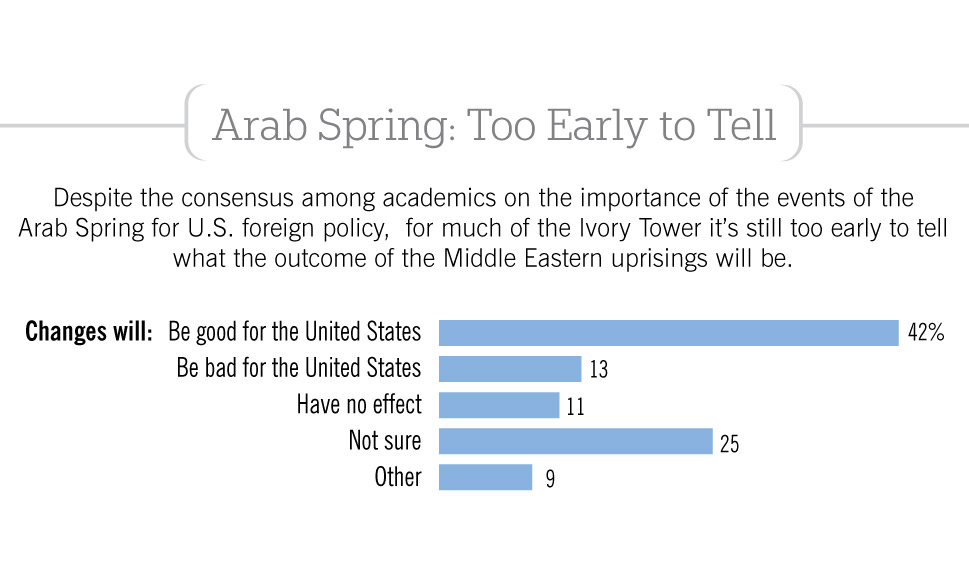 A majority of IR scholars supported the use of military force in Libya that contributed to the fall of Muammar al-Qaddafi’s regime. But as a group, IR scholars generally disapprove of U.S. military intervention. IR scholars are not much more likely to approve of intervention on strategic grounds, as in the case of Iran producing a nuclear weapon or extremists taking over in nuclear-armed Pakistan. 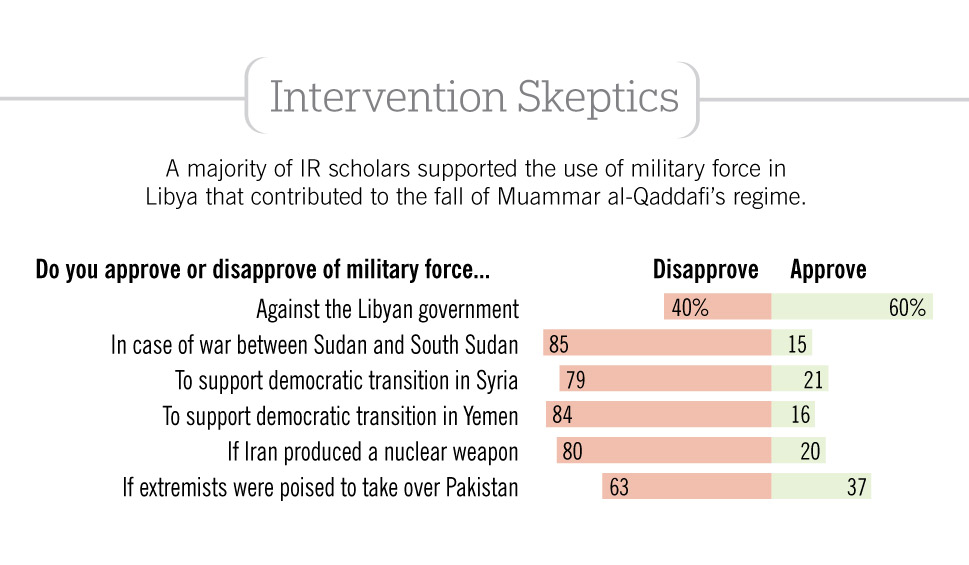 IR scholars believe that the United States is a safer place than in the recent past. A 60 percent majority of academics surveyed believe that terrorists’ ability to strike the U.S. homeland is lower than it was prior to Sept. 11, 2001, and only 2 percent of respondents believe it is greater. 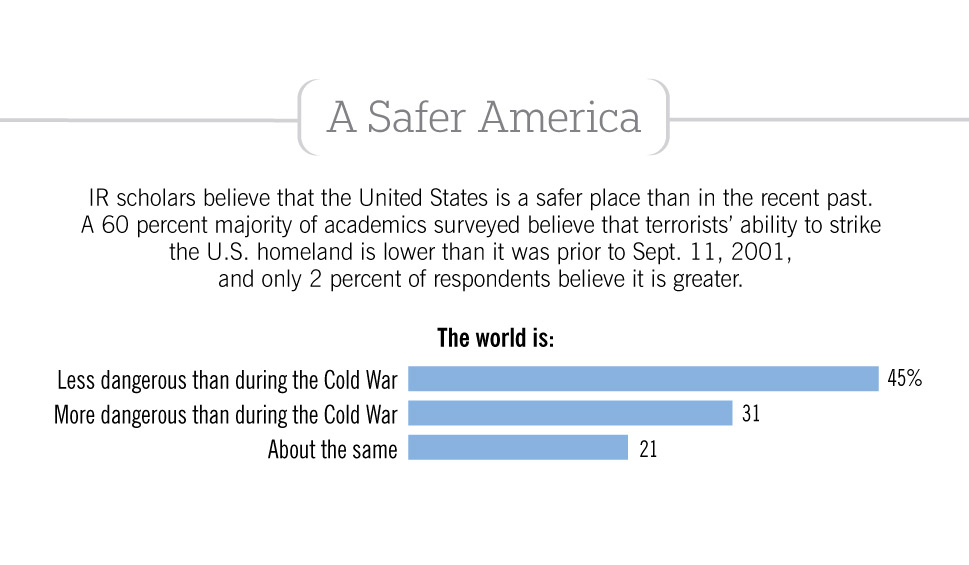 Although the Middle East may get all the headlines, IR scholars pick East Asia as the region of greatest strategic importance to the United States today, with 45 percent identifying it as the most significant area, up from 30 percent who did so in 2008.

Policymakers are in line with the professors: Half of the practitioners surveyed agree with this assessment today, and 85 percent think East Asia will be the most important strategic region for the United States in 20 years. 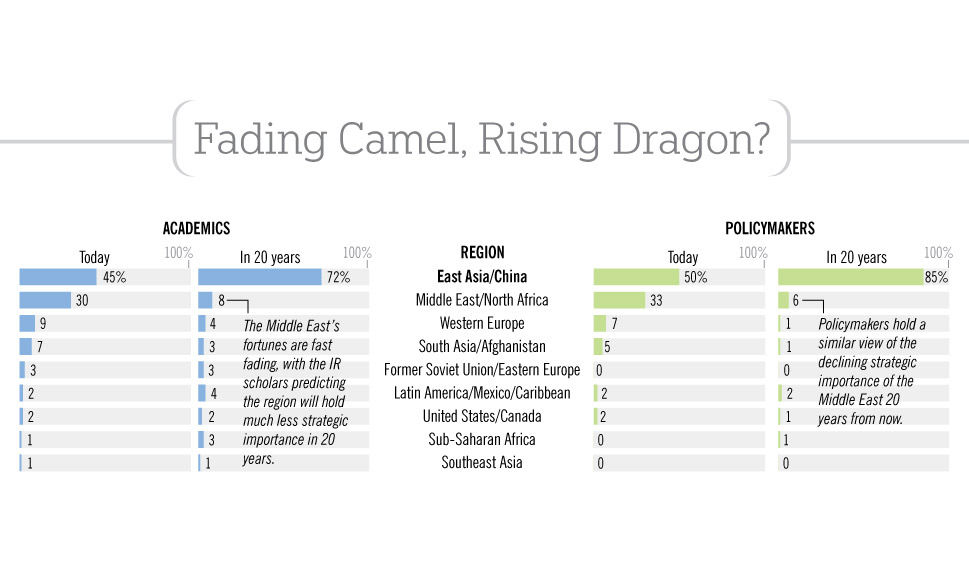 The consensus among IR scholars is that there is still time before China overtakes the United States in political influence. On a scale from 0 to 10, IR scholars rate the two countries: 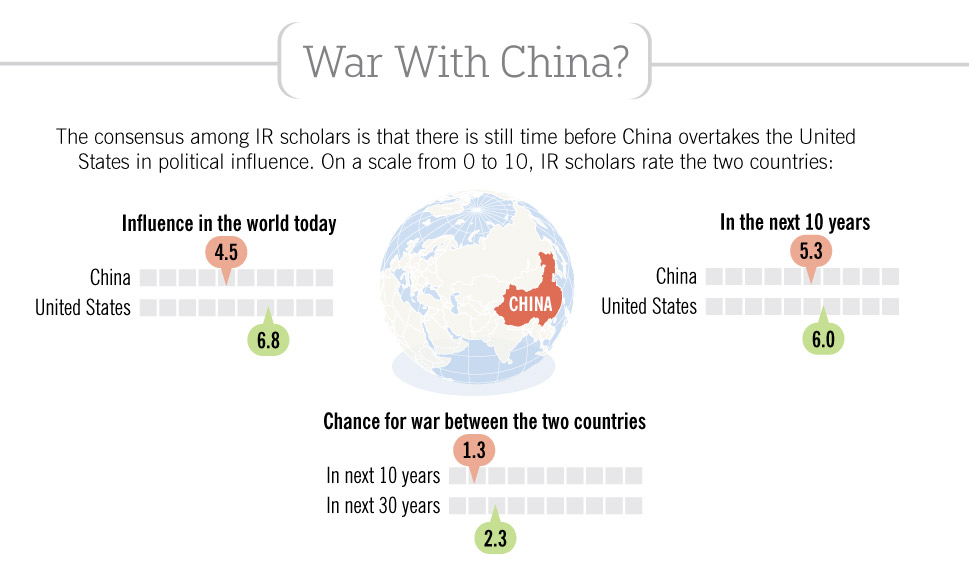 Change They Can Believe In

While the public may not be thrilled with President Barack Obama’s job performance on the economy, IR scholars believe he is doing quite well in his role as commander in chief. Obama scores higher than both George W. Bush and Bill Clinton, but not as high as George H.W. Bush, who was at the helm during the collapse of the Soviet Union. Some of Obama’s predecessors fare worse than others: 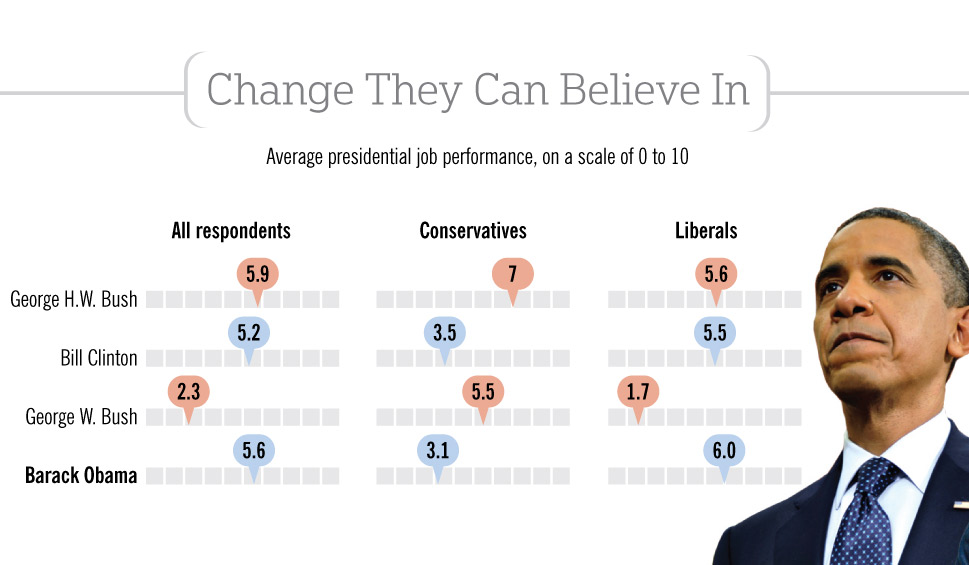 Who Inhabits the Ivory Tower?

While the academy is still dominated by men, the number of women in the Ivory Tower is increasing rapidly. In 2006, only 23 percent of our respondents were women. Today, that figure has risen to 32 percent, and increasingly women show up on the lists of scholars doing the “most interesting” work. In 2011, three of the top 10 scholars on that list were women, including George Washington University’s Martha Finnemore, who is ranked No. 1 by her peers. 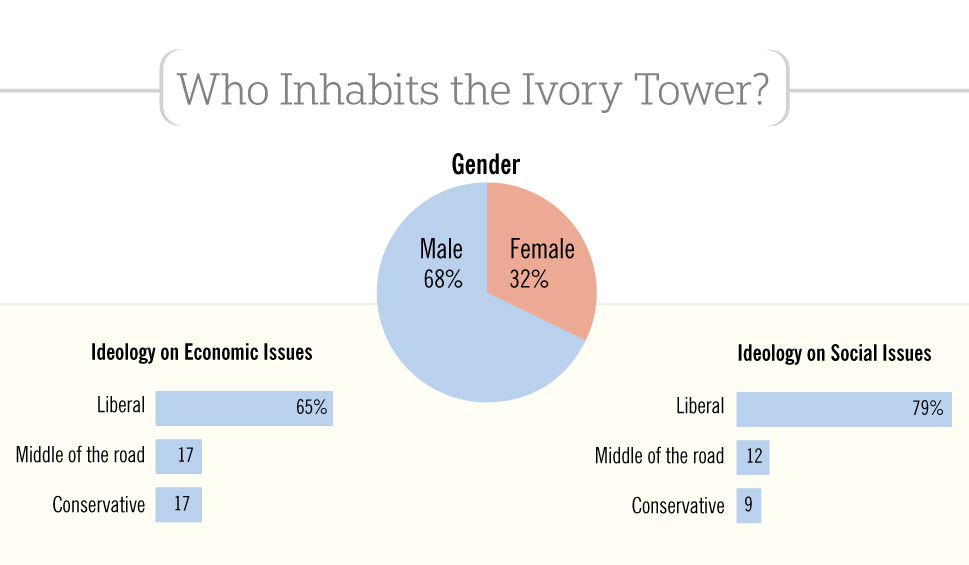 The year 2011 represented a changing of the guard in more ways than one. For the first time, more scholars adopted a constructivist approach than either a realist or liberal framework. The surge in constructivist work, which focuses on the role of ideas and identity in shaping state preferences and international outcomes, started in the 1990s and shows no signs of leveling off. 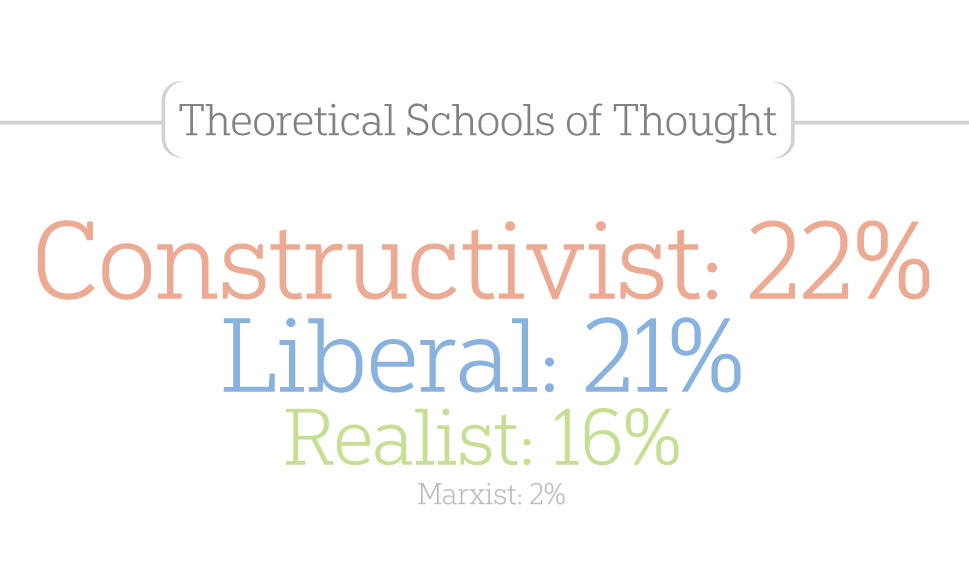 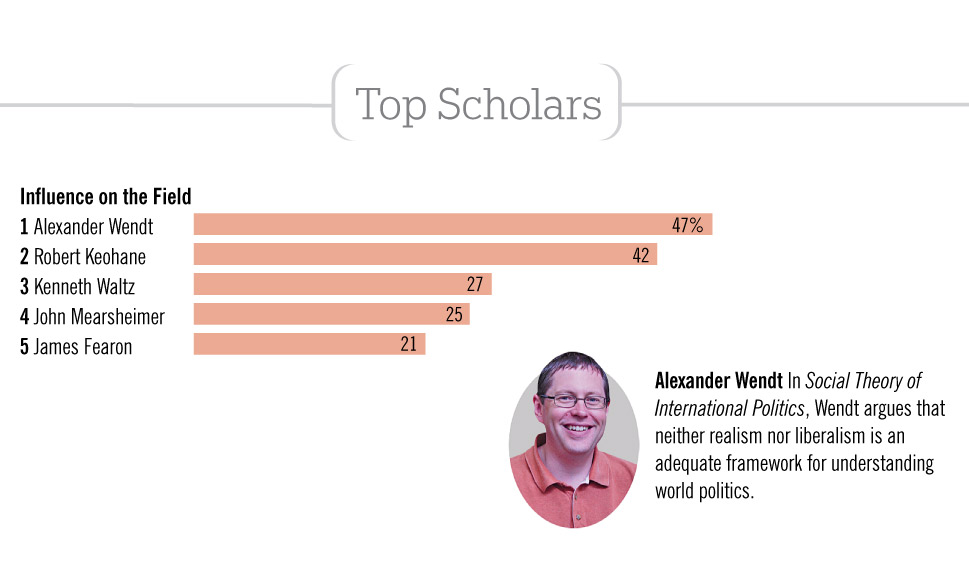 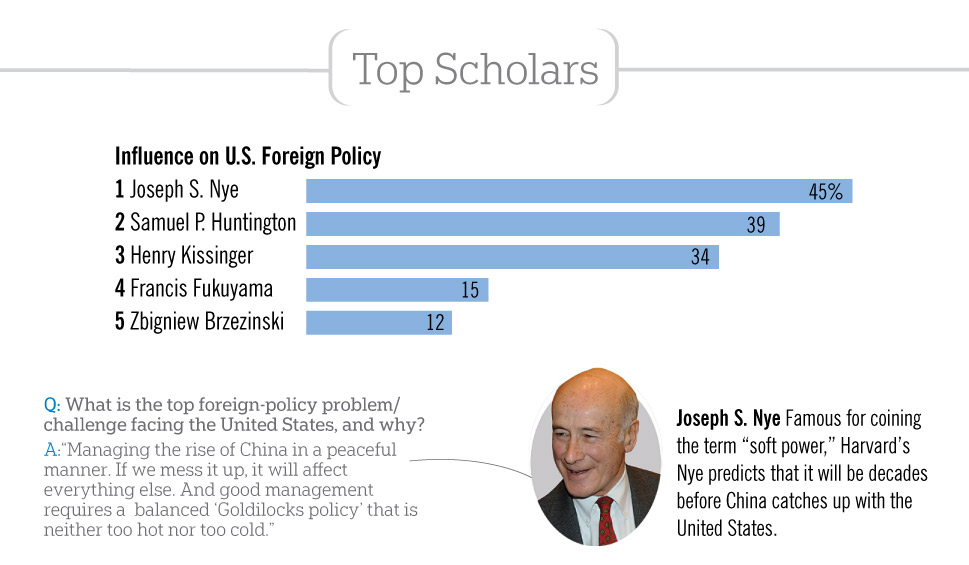 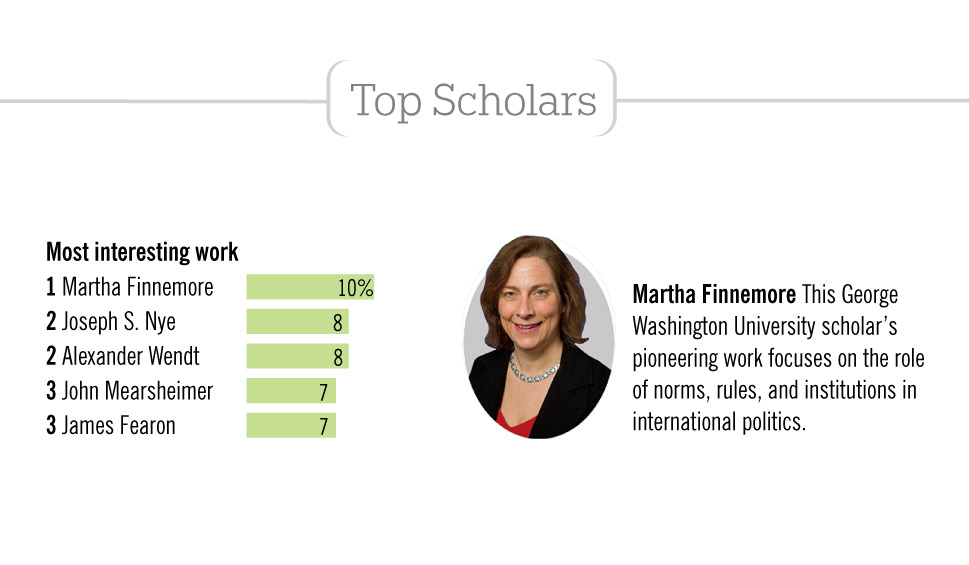 Will Bolsonaro Pay the Price for a Botched Pandemic Response?

Japan Doesn’t Want to Become Another Casualty of English