Dissidents to Watch in 2012

Five notable Chinese activists who are pushing the boundaries of dissent ... and on whom China is pushing back.

Crime and Punishment: Authorities charged him with "tax evasion," saying that a company registered to his wife owed 2.4 million dollars in taxes, and disappeared him for almost three months starting in April 2011. More likely, authorities disapproved of his campaigning for victims of the Sichuan earthquake, his outspokenness in criticizing China to the foreign press, and the real and proverbial middle finger that appeared throughout his art work.

Crime and Punishment: Authorities charged him with “tax evasion,” saying that a company registered to his wife owed 2.4 million dollars in taxes, and disappeared him for almost three months starting in April 2011. More likely, authorities disapproved of his campaigning for victims of the Sichuan earthquake, his outspokenness in criticizing China to the foreign press, and the real and proverbial middle finger that appeared throughout his art work.

In an interview, he explained how he dealt with the isolation:

I realized you need information to stay alive. When there’s no information, you’re already dead. It’s a very, very strong test — I think more severe than any physical punishment.”

Desperate for interaction, Ai began to needle the guards to provoke a response. But they “just sat and stared at me with no expression. They were very young, and clean, and emotionless, like you were not there,” he says. With nothing to do, Ai paced back and forth in his cell, covering some 600 miles and losing almost 30 pounds during his 81 days of confinement. “All I wanted was a dictionary, even the simplest one,” he says, adding that passing the time was “impossible.” “I really wished someone could beat me. Because at least that’s human contact. Then you can see some anger. But to dismiss emotion, to be cut off from any reason, or anger, or fear, psychologically that’s very threatening.”

Reaction: Ai remains a celebrity both inside and outside of China. In November, the Chinese government again ramped up its case for the charges of tax evasion, which Ai fought in a creative, populist manner: He offered netizens the opportunity to lend him money. Hundreds of thousands contributed. Most recently, Ai, who has more than 120,000 followers on Twitter, said that if the site starts censoring tweets, he’ll stop tweeting.

Crime and Punishment: Ni advocated for people forcibly evicted from their homes in the run-up to the Beijing Olympics. In a cruel irony, her house itself was razed, leaving her and her husband homeless. Repeated torture in prison over the years crippled her. Ni went on trial in December 2011 accused of fraud, falsifying facts to steal property, and causing a disturbance at a hotel. Ni, who was also charged with “provoking trouble,” has yet to be sentenced.

Reaction: The Netherlands government awarded the imprisoned Ni the 100,000 euro Human Rights Defender Tulip award on Tuesday, Jan. 31. That same day, police barred Ni’s daughter from visiting the Netherlands to collect the prize. The jury’s chairwoman said “Economic interests must never be a reason to close our mouths on human rights. We should rather have one Human Rights Tulip Award than one exported tulip to China.”

Crime and Punishment: Xiaobo is charged with “inciting subversion of state power.” The criminal court verdict released after his trial in December 2009 says that “defendant Liu Xiaobo, due to his dissatisfaction with the political and socialist system of our country’s people’s democratic dictatorship,” published articles with titles like “Can It Be that the Chinese People Deserve Only ‘Party-Led Democracy?” and “Further Questions about Child Slavery in China’s Kilns.” He was also one of the lead authors of Charter 08, a manifesto calling for more rights in China.

The verdict went on to detail the “rumors and slanders” in Liu’s articles, including: “Since the Communist Party of China took power, generations of CPC dictators have cared most about their own power and least about human life.” He is now two years into an 11-year prison sentence.

Reaction: Despite Chinese authorities’ slippery behavior in sentencing him on Christmas Day 2009, when many diplomats and journalists stationed in Beijing were away, his arrest still drew widespread attention. But when the Nobel Committee decided to award him the Nobel Peace Prize in 2010, it was a public relations disaster for the Chinese regime, which called the decision “a blasphemy to the peace prize.” Some commentators compared China’s reaction to that of Nazi Germany in 1936, which called the award given to German dissident Carl von Ossietzky “preposterous.”

Crime and Punishment: Never charged, he drew official ire for his outspokenness and for writing a book entitled Wen Jiabao: China’s Greatest Actor, which criticized China’s premier for his insincerity. He told a news conference in Washington, D.C.  in January, just weeks after he fled China, that the day before the Nobel ceremony recognizing Liu Xiaobo, he was taken from his home, shoved into a car, taken to an undisclosed location, stripped naked, and kicked and slapped. “Right now, foreigners are awarding Liu Xiaobo the Nobel Peace Prize, humiliating our party and government. We’ll pound you to death to avenge this,” Yu said the head security officer told him.

Reaction: Yu described at his D.C. news conference how security forces had also told him, “There are no more than 200 intellectuals in the country who oppose the Communist Party and are influential. If the central authorities think that their rule is facing a crisis, they can capture them all in one night and bury them alive.”

The more sarcastic activists of the Chinese Internet seized on this, and “to be buried alive” became an online catch phrase. One online novelist even included the phrase in his Spring Festival greeting: “Happy New Year — hope you make it onto the bury alive list!”

Yu is now writing another controversial book, this one with the title Hu Jintao: Cold Blooded Tyrant, from the safety of the United States. 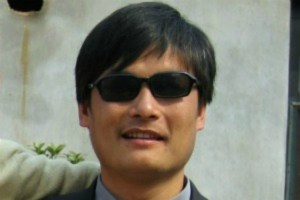 Crime and Punishment: Chen, a blind, self-taught activist, defended peasants who were sterilized and forced to have late-term abortions under the one-child policy. He was sentenced to four years and three months in prison in 2006 for “damaging property and organizing a mob to disrupt traffic.” Upon release, authorities forced him to remain in a small village in Shandong province, surrounded by plainclothes security officials, who deny him contact with the outside world.

Reaction: Chen’s village has become somewhat of a human rights shrine and adventure tourism destination. Actor Christian Bale, in China to promote a film, attempted to visit Chen in December only to be attacked by the security guards. Author Murong Xuecun described  in the Guardian his attempt to visit the village:

“We’re here to see a man called Chen Guangcheng. May I ask if he lives here?’

Taken aback by my directness, he paused. Then covertly he leaned in towards me to say, ‘Well, there have been some robberies recently here in the village. You know, chickens, cows. So I can’t let you in.’

His expression turned stern. A few others came out of the house, among them a middle aged man wearing a black corduroy jacket. The man had a mild face but his words were brusque: ‘It’s harvest season. All the men are gone. We’re afraid of losing things so you can’t come in.'”

When Murong insisted, the men attacked him.

Many other Chinese, including a carload of physically disabled men and women, emboldened by Chen’s work in defending the disabled, have also attempted to visit Chen’s village. Although guards did not attack the disabled citizens, they did try to steal their milk.

NEW FOR SUBSCRIBERS: Want to read more on this topic or region? Click + to receive email alerts when new stories are published on Economics, China, East Asia