Five places that aren't feeling the love this Valentine's Day. 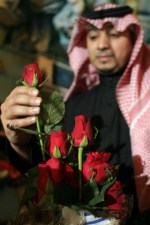 Under the kingdom’s strict interpretation of Islamic law, Valentine’s Day is forbidden because it celebrates the life of a Christian saint and “encourages immoral relations between unmarried men and women,” according to Sheikh Khaled Al-Dossari, a Saudi religious scholar. All the accoutrements of Valentine’s Day merely represent the culture “of a people who are involved in the humiliation and killing of our fellow brothers and sisters,” Mariam Anwer, a Saudi schoolteacher, told the Saudi Gazette.

Every year, Saudi Arabia’s infamous morality police force, the Commission for the Promotion of Virtue and Prevention of Vice, raids shops a few days before Feb. 14, instructing owners to remove red roses, red wrapping paper, teddy bears, and gift boxes. On the eve of the holiday, they raid stores and seize symbols of love.

Because of the ban on red roses, a black market has flowered ahead of Valentine’s Day. Roses that normally go for five Saudi riyal (about $1.30) fetch up to 30 riyal ($8) each on Feb. 14. Florists reportedly deliver bouquets in the middle of the night or early morning, to avoid suspicion.

Ahmed Al-Omran, a well-known Saudi blogger, told CNN back in February 2008 that the government’s ban would give the international media another reason to make fun of the Saudis “but I think that we got used to that by now.”

Valentine’s Day has become increasingly popular in the Islamic Republic, where 70 percent of the population is under 30 and stores have done a brisk business in cards and teddy bears in recent years.

But Iran’s religious authorities aren’t feeling the love. On Feb. 6, 2011, the Iranian regime outlawed Valentine’s Day. “Symbols of hearts, half-hearts, red roses, and any activities promoting this day are banned,” announced a decree on a state-run website.

“Honoring foreign celebrations is the spread of Western culture,” Ali Nikou Sokhan, the head of the printing works owners’ union, told Tehran’s Iranian Labor News Agency at the time. “Our country has an ancient civilization and various days to honor kindness, love, and affection.”

The Valentine’s ban joins rules against unauthorized mingling of the sexes, rap and Western music, women playing in bands, too-bright nail polish, laughter in hospital corridors, and even the mention of foreign food recipes in state media.

Mehregan, a pre-Islamic Persian fall festival celebrating love and friendship, has been suggested as a replacement by some Iranian nationalists.

It’s not just the Middle East that isn’t feeling the love. The celebration of Valentine’s Day has been banned for Muslims in Malaysia — about 60 percent of the population — since 2005, when Islamic officials ruled that the holiday was incompatible with Islam due to its Christian elements and promotion of “immoral behavior.”

In 2009, 100 people were arrested for celebrating the holiday, and in recent years, the extremist Parti Islam Semalaysia (PAS) youth group has been campaigning to put a stop to the celebration by non-Muslims as well.

“We are not trying to assume the role of moral police here,” PAS youth chief Nasrudin Hassan Tantawi said, “but we want to help save youngsters from falling into the Valentine’s Day trap that promotes immoral activities.”

This year, the government-run Office of Islamic Development (OID), which is entrusted with protecting the purity of faith and the teachings of Islam, has led a public campaign to warn against Valentine’s Day as a trap that can lead to immoral behavior. Leaflets have been distributed to university students encouraging them to forget that it’s Valentine’s Day.

Reaction to the ban among young Malaysians has been mixed. Some, like 19-year-old Nadzmie Hashim, chose to look on the bright side.  “During Valentine’s Day, prices from flowers to food increase exorbitantly, all in the name of love,” he said. “So I don’t mind celebrating Valentine’s Day a day or a week after Feb. 14.”

This year, the Uzbek government put an “unofficial ban” on Valentine’s Day, canceling numerous concerts and other events scheduled for Feb. 14. Residents in the capital city of Tashkent are instead encouraged to take part in readings of poems by 16th-century Mughal emperor Babur.

But this is just the culmination of a longtime campaign by the authorities to stamp the holiday out. The Uzbek authorities’ anti-Valentine’s Day campaign started in 2006 when, in the run up to the holiday, the government’s information agency warned local magazine publishers to avoid publishing any material with a Valentine’s theme. Last year, the Uzbek news agency Turkiston declared Valentine’s Day to be a threat to national values, full of “forces with evil goals.”

But canceling official events may not be enough to stop amorous young folks from celebrating. Mokhira, a 20-year-old waitress, told the UzNews Website that rather than Mughal poetry, she was just planning on going clubbing this year. “Who knows, maybe I’ll find a really nice bloke and fall in love with him,” she said.

Authorities in this western Russian province have deemed the lovers’ holiday a threat to “spiritual security” and claim that the holiday encourages promiscuity. As a result, they’re encouraging schools, businesses, and nightclubs to abstain from promoting the day.

Grigory Bolotnov, a spokesman for the governor of Belgorod, told Bloomberg last February that Valentine’s Day promotes “amorousness rather than love” adding that “it’s designed to swell the emotions, and you know what kind of teenage liaisons happen then.”

According to Bolotnov, government-funded institutions were instructed to refrain from promoting Valentine’s Day in any way, though private businesses and individuals are free to do as they please. The move is part of a wider drive to boost the influence of the Russian Orthodox Church in a country where church and state are constitutionally required to remain separate.

The initiative, however, will likely fail to catch on in the rest of Russia. Since the mid-1990s, Russians have adopted both Valentine’s Day and Halloween with relish. According to polling agency Romir, 81 percent of Russians over the age of 18 plan on celebrating the holiday this year.

Belgorod’s attitude hasn’t done any favors to its public image. The independent news website Gazeta.ru last year referred to it as “Belgorod — a territory without love.”

Biden or Trump, the U.S.-Brazil Relationship Is Still Headed for Trouble

You Can Only See Liberalism From the Bottom