Portrait of Massouma Esmatey-Wardak (left), UNESCO Conference, Paris, France, 1959 “I was trouble,” my grandmother said with amused satisfaction as she recounted tales of growing up in Afghanistan. “Right from the start, I gave the boys hell.” At first, the “boys” were cousins in Kandahar whom she harassed mercilessly, at the risk of a beating ...

“I was trouble,” my grandmother said with amused satisfaction as she recounted tales of growing up in Afghanistan. “Right from the start, I gave the boys hell.”

At first, the “boys” were cousins in Kandahar whom she harassed mercilessly, at the risk of a beating by her parents; then it was the men in the government whom she lobbied as the president of the Afghan Women’s Council (AWC) and Minister of Education, and later it would be a group of Islamic fundamentalists whom she defied — at the risk of death.

Massouma Esmatey-Wardak was not an exception, but an example of the freedom countenanced by women in Afghanistan. In 1959, at the advent of social reforms by Prime Minister Daud Khan under King Zahir’s rule, she was among a small group of women who adopted the ban on mandatory veiling in public. Maintaining that Islam and honor were not contingent on women’s seclusion, she advocated for women’s rights and served on the Constitutional Advisory Committee that drafted the progressive 1964 Afghan Constitution, which enfranchised women and gave them access to education and employment. In 1965, her election to the lower house of the Afghan Parliament from the conservative province of Kandahar surprised the nation and further revolutionized the role of women. She was not the token female candidate, but rather the product of a popular vote to elect an educated and competent representative. Championing sweeping reforms that galvanized social and economic development, she became known for her steadfast commitment to women’s rights, in face of societal pressures, as well as her pragmatic and frighteningly-tough character. 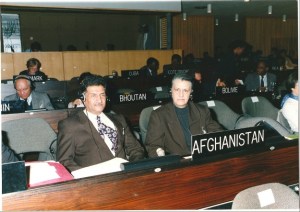 As president of the AWC from 1987-1990, she made bold strides in gender equality that would characterize her leadership. Her accomplishments included income generation opportunities for women, the strengthening of women-focused civil service organizations, equal pay with men, and workplace childcare; improvements designed to integrate females, who had long been traditionally marginalized, into the public and professional sphere. She also worked to change child custody regulations that granted the father and his agnates de facto custody based upon Islamic law. By the end of her tenure at AWC, membership had expanded to 150,000 women in almost every province.

In the wake of her successes at the helm of AWC, President Najibullah Ahmadzai appointed Massouma as Minister of Education in 1990, though she was not a part of his contentious political party. Her appointment at a post formerly held by her husband, who supported her, was part and parcel of the political reformations in the country at that time. Under the Democratic Republic of Afghanistan (DRA), the country was progressing socially in a way that seemed incongruous with Islam. And more than ever, Massouma was determined to secure access to education and promote literacy for women. The efforts were condemned by most Mujahideen leaders, who perceived the developments as a communist endeavor destined to obliterate Islam from the country’s core values, and promote sexual anarchy.

Women’s rights disintegrated in the chaos of the civil war — and the brain drain that ensued with the exodus of educated Afghans. My family left in 1990 at the cusp of the conflict, but my grandmother stayed until 1992 to hand over the Ministry of Education (MoE) to its new leader. After the Soviet withdrawal, President Najibullah agreed to transfer power to the Mujahideen in an effort brokered by the United Nations. Headed by President Mojadeddi, the former Jihadists took key ministerial positions in the new Islamic Afghan Government. The MoE was entrusted to Mohammad Yunus Khalis, a now-notorious commander and contemporary of Gulbuddin Hekmatyar, who led his own Islamic party, Hezb-e-Islami Khalis. My grandmother recalled the day she met him and his staff in her office; she in her tailored skirt suit, and he and his men in the traditional shalwar kameez, ridden with lice and spitting snuff under the carpets. Her key and the future of women’s education rested in Khalis’ hand.

For three months, Massouma lived alone in an apartment in Kabul with factional fighters fighting above her. She witnessed the atrocities that galvanized a period of depraved lawlessness during the civil war, as young girls jumped out of windows to escape rampant sexual assault by the fighters. Some sought her out in anger and were turned away by a former staffer, who remained loyal even as the threats to her life intensified. It was eventually through him that she sent word to Hamid Karzai, then the deputy minister of foreign affairs. He assured her security and safe passage, and issued her a passport out of Afghanistan. But it was no longer a country she recognized.

The Taliban dealt the final blow to the social development and women’s rights of my grandmother’s generation. The current Government of the Islamic Republic of Afghanistan maintains a sketchy record of human and women’s rights, and yet 50 years ago, even women in some rural areas had access to education and healthcare. Neither my grandmother nor my grandfather was born to wealthy families with vast social capital. They came from modest families that understood the value of education — especially for women — as a part of Islam, not divorced from it.

Born in 1930 in Kabul, Massouma was encouraged by her parents, who were teachers, to excel in her studies, which she managed to do even as the caretaker of her six siblings when her mother fell ill. At 17 she became a teacher herself and enrolled in college to study social sciences. Her performance earned her a scholarship to study education administration at a teaching college in Illinois. Together with her husband, who would complete his master’s degree in physics at Georgetown University, she came to America in 1957 and returned to Afghanistan in 1959 with high hopes of modernizing the country. 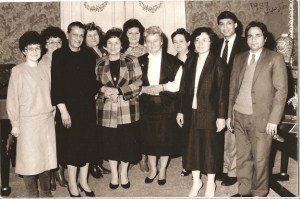 Like most displaced immigrants, my grandmother was far removed from whom she once used to be when she died in 2007. The headstone that crowns her with a simple epitaph is a reflection of her unwavering strength today, and renders the irony of her demise from Parkinson’s a particularly cruel one. An even greater dishonor to Massouma’s memory would be if the achievements of powerful pioneers, like her, were stricken from the current discourse of social change in Afghanistan. They are a testament to the power and potential of Afghan women — and that cannot be buried nor forgotten.