It's clear that much has changed in Southeast Asia since the Vietnam War. Over the past 25 years, Vietnam has transformed itself. In 2007, Vietnam became a full-fledged member of the global economic community through its membership in the World Trade Organization. It has become a magnet for foreign investment and is evolving rapidly from an agricultural economy to one focused on higher-value manufacturing and services. But if Vietnam wants to sustain its remarkable growth, it will need to boost labor productivity in the industrial and service sectors in the years ahead.

Here are 10 takeaways from the McKinsey Global Institute report "Sustaining Vietnam's Growth: The Productivity Challenge" that might surprise you. 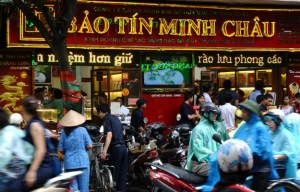 It’s clear that much has changed in Southeast Asia since the Vietnam War. Over the past 25 years, Vietnam has transformed itself. In 2007, Vietnam became a full-fledged member of the global economic community through its membership in the World Trade Organization. It has become a magnet for foreign investment and is evolving rapidly from an agricultural economy to one focused on higher-value manufacturing and services. But if Vietnam wants to sustain its remarkable growth, it will need to boost labor productivity in the industrial and service sectors in the years ahead.

Here are 10 takeaways from the McKinsey Global Institute report “Sustaining Vietnam’s Growth: The Productivity Challenge” that might surprise you.

1. Vietnam has grown more rapidly than any other Asian economy except China.

Vietnam, a country once ravaged by war, has been one of Asia’s economic success stories over the past quarter-century. Ever since the Communist Party introduced reforms known as “Doi Moi” (“Renovation”) in 1986, the country has reduced barriers to trade and capital flows and opened the economy more widely to private business. During this period, the economy has expanded faster than any other Asian economy except China’s, posting annual per capita GDP growth of 5.3 percent. This growth has continued in the face of the 1990s Asian financial crisis and the recent global economic downturn (the economy grew 7 percent per year from 2005 to 2010) — a more robust record than many other Asian economies can boast. 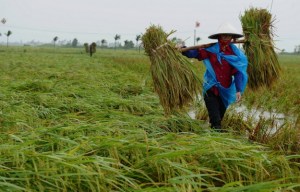 2. Vietnam is moving out of the paddy fields.

Vietnam’s economy no longer revolves around agriculture. In fact, agriculture’s contribution to the country’s GDP has been cut in half from 40 to 20 percent in just 15 years, in a much more rapid shift than we have observed in other Asian economies. A comparable transformation took 29 years in China and 41 years in India. 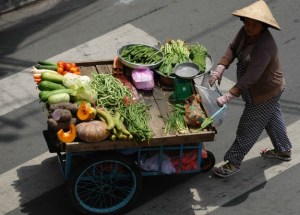 3. But Vietnam is a leading global exporter of pepper, cashews, rice, and coffee. 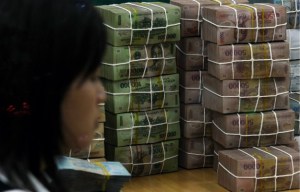 Rising labor costs in China have already spurred some factory owners to shift production to Vietnam, which has an abundance of low-wage labor. The trend has fueled talk among many CEOs about Vietnam becoming Asia’s next big platform for manufacturing exports — a smaller version of China, or China+1.

But Vietnam is very different from China in two respects. First, Vietnam’s economy is driven more by personal consumption than China’s is. Consumption by households accounts for 65 percent of Vietnam’s GDP — an unusually high share in Asia. In China, by contrast, consumption accounts for just 36 percent of GDP.

Second, while China’s rapid economic growth has been fueled by manufacturing exports and extraordinarily high levels of capital investment, Vietnam’s economy is much more balanced between manufacturing and services, which each accounting for approximately 40 percent of GDP. Vietnam’s growth has been broad-based, with competitive niches across the economy. Over the past five years, output in the industry (including construction, manufacturing, mining, and utilities) and service sectors has grown at comparable annual rates of about 8 percent. 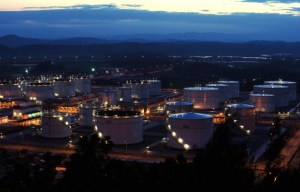 5. Vietnam is a magnet for foreign investment.

Vietnam is on most lists of attractive emerging markets for foreign investors. Surveys by Britain’s trade and investment department and the Economist Intelligence Unit have consistently ranked Vietnam the most attractive emerging-market destination for foreign direct investment (FDI) after the BRIC quartet of Brazil, Russia, India, and China. Registered FDI flows into Vietnam increased from $3.2 billion in 2003 to $71.7 billion in 2008 before falling during the global recession to $21.5 billion in 2009.

Here, again, Vietnam diverges from China. Nearly 60 percent of FDI in China has been poured into labor-intensive manufacturing, compared with only 20 percent in Vietnam. In the latter case, much of the remaining investment has found its way to mining, quarrying, and oil and gas extraction (40 percent) and real estate (15 to 20 percent), reflecting rapid growth in Vietnam’s tourism industry. The number of foreign tourists coming to Vietnam has risen by one-third since 2005. 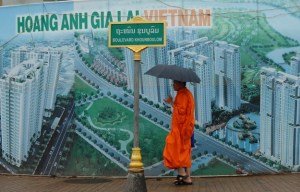 6. Vietnam has more advanced road infrastructure than the Philippines or Thailand.

Vietnam has begun to make significant investments in infrastructure. Many visitors to Vietnam still view the country’s roads as pretty basic. But, for its stage of economic development, Vietnam has been adding road infrastructure at quite a rate. Its road density reached 0.78 kilometers per square kilometer in 2009, which is higher than the road density in the Philippines or Thailand, both economies that are further on in their development than Vietnam is. That same year, electricity networks covered more than 96 percent of the country. New container ports such as those in Dung Quat and Cai Mep and airports such as those in Da Nang in central Vietnam and Can Tho in the Mekong Delta region have improved connections with the rest of the world. 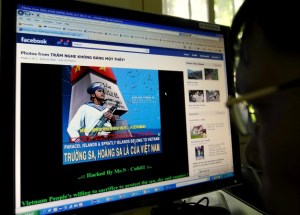 At 31 percent, Internet penetration in Vietnam is much lower than in other Asian states such as Malaysia (55 percent) and Taiwan (72 percent). But this is changing rapidly. Broadband subscriptions in Vietnam increased from 0.5 million in 2006 to around 3.8 million in 2010, the same year that 3G subscriptions hit 7.7 million. Once the telecom infrastructure catches up, mobile and Internet use is likely to explode. Already, 94 percent of Vietnam’s Internet users access news online. More than 40 percent of users access the web every day. 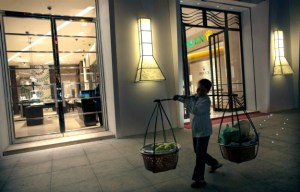 8. Vietnam is becoming a top location for outsourced and offshore services.

Vietnam already employs more than 100,000 people in the outsourcing and offshore services sector, which today generates annual revenues of more than $1.5 billion. Several prominent multinational corporations have established operations in Vietnam, including Hewlett-Packard, IBM, and Panasonic. In fact, the country has the potential to become one of the top 10 locations in the world in this sector, due to its relatively large pool of young college graduates (universities send 257,000 young men and women into the workforce each year) and relatively low wages. A software programmer in Vietnam can be employed for less than 60 percent of what it costs to hire one in China, while data-processing and voice-processing agents in Vietnam cost 50 percent less to employ than their counterparts in China.

Outsourcing and offshore services in Vietnam could produce annual revenues of between $6 billion and $8 billion a year, much of it export-oriented — as long as there is sufficient demand and Vietnam ensures that it can satisfy that demand. This sector could become an engine of job creation in urban areas, employing an additional 600,000 to 700,000 people by 2020 and contributing 3 to 5 percent to Vietnam’s GDP growth. 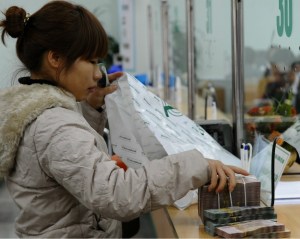 9. Vietnamese banks are lending at a faster rate than their Chinese, Indian, or ASEAN counterparts.

Total outstanding bank loans in Vietnam have increased by 33 percent per year over the past decade — a stronger growth rate than those recorded in China, India, or any Association of Southeast Asian Nations (ASEAN) country. By the end of 2010, the value of outstanding loans had reached an estimated 120 percent of GDP, compared with only 22 percent in 2000. Although this may be evidence of new dynamism in the Vietnamese economy, oiled by an expanding banking system, the worry is that an associated rise in non-performing loans could trigger significant economic distress in Vietnam (as it has elsewhere) and force the government to intervene in the financial sector to protect depositors, the banking system, and, ultimately, taxpayers. 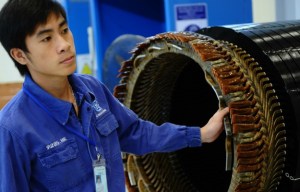 Between 2005 and 2010, an expanding pool of young workers and a rapid shift away from agriculture generated two-thirds of Vietnam’s growth. The other one-third came from enhanced productivity. But now the first two drivers of growth are weakening. Official statistics predict that growth in the labor force will decline to around 0.6 percent a year over the next decade, compared with annual growth of 2.8 percent from 2000 to 2010. And it seems very unlikely that the transition from farm to factory can continue at anything like the speed we have seen in the recent past.

Productivity improvements will therefore need to pick up the slack if Vietnam is to maintain its historical growth rate. More precisely, labor productivity growth in the service and manufacturing sectors will need to accelerate by more than 50 percent from 4.1 percent annually to 6.4 percent if the economy is to meet the government’s target of 7 to 8 percent annual growth by 2020. Should that productivity boost not materialize, Vietnam’s growth would likely decline to between 4.5 and 5 percent annually. At that pace, Vietnam’s GDP in 2020 would be 30 percent lower than it would have been had the economy continued to grow by 7 percent each year.

Vietnam has many intrinsic strengths — a young labor force, abundant natural resources, and political stability. If it acts decisively to head off short-term risks and pursues a productivity-led growth agenda, it can enter a second wave of growth and prosperity.

NEW FOR SUBSCRIBERS: Want to read more on this topic or region? Click + to receive email alerts when new stories are published on Economics, Southeast Asia