The ‘Peace Process’: A Short History

Chronicling Israel and Palestine's path to becoming a catchphrase.

With the Israeli-Palestinian conflict arguably no closer to being resolved than it was a decade ago, one has to wonder: Has the much-vaunted “peace process,” hailed by U.S. presidents from both parties, become a charade? The phrase’s long history suggests that there’s been a lot more process than peace. Now, as Arab uprisings transform the Middle East and Israelis and Palestinians go their separate ways, it may be time to pick a new buzzword: stalemate. –Uri Friedman

1967
After the Six-Day War, U.N. Security Council Resolution 242 calls for Israel to withdraw from occupied territories in exchange for the end of hostilities and respect for the sovereignty of all states in the area. The imprecise language neuters the resolution, but the land-for-peace formula will inform — or haunt — peace efforts thereafter.

1973
Egypt and Syria launch coordinated surprise attacks on Israel in Sinai and the Golan Heights on Yom Kippur. The U.S.-Soviet brinkmanship over the war and the Arab oil embargo highlight the conflict’s geopolitical dimensions, and the United States devotes more diplomatic muscle to resolving it.

1973-1975
In what the media dub “shuttle diplomacy,” U.S. Secretary of State Henry Kissinger holds bilateral talks with the Yom Kippur War belligerents, helping defuse the immediate crisis. Kissinger and his advisors refer to these diplomatic efforts as a “negotiating process” and then, as the political climate in the region defrosts, a “peace process.” The process stalls as U.S. President Richard Nixon resigns and Six-Day War hero Yitzhak Rabin assumes power in Israel.

1974
Arab leaders recognize the Palestine Liberation Organization (PLO) as the “sole legitimate representative of the Palestinian people,” transforming the Palestinian question from one of refugee rights into one of nationalist aspirations. “I have come bearing an olive branch and a freedom fighter’s gun,” PLO Chairman Yasir Arafat informs the U.N. General Assembly a month later. “Do not let the olive branch fall from my hand.” 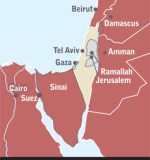 1975
An influential Brookings Institution study breaks with Kissinger’s incremental peace process, advocating a “comprehensive” Arab-Israeli settlement that would include Israel’s withdrawing to roughly its pre-1967 borders and support of Palestinian self-determination in return for diplomatic recognition and peace with its Arab neighbors.

1977
U.S. President Jimmy Carter brings several authors of the Brookings report into his administration and resolves to pursue a more ambitious peace process, surprising even his closest advisors by openly calling for a Palestinian “homeland.” Israel’s Menachem Begin and Egypt’s Anwar Sadat express an appetite for peace, and Sadat becomes the first Arab leader to visit Israel.

1978-1979
Sadat and Begin meet with Carter, producing the Camp David Accords and, a year later, an Egyptian-Israeli peace treaty in which Egypt recognizes Israel and Israel withdraws from Sinai. The treaty invites Israel’s other neighbors to “join the peace process with Israel.” No takers.

1982
After Sadat’s assassination and Israeli attacks on the PLO in Lebanon, U.S. President Ronald Reagan calls for a “fresh start,” urging Jordan to work with the Palestinians to achieve self-government. The goal goes unrealized.

1985
Dennis Ross, who would advise five U.S. presidents on the Middle East, argues that the United States should cautiously facilitate diplomacy in the region “while patiently awaiting real movement from the local parties.”

1987
Sheikh Ahmed Yassin founds Hamas amid the eruption of the First Intifada, a Palestinian uprising against Israeli control of the West Bank and Gaza. The group’s 1988 charter calls for Israel’s destruction and the creation of an Islamist Palestinian state through violent jihad.

1991
Emboldened by success in the Gulf War, U.S. President George H.W. Bush co-sponsors, with the Soviet Union, a conference in Madrid between Israel and Jordan, Lebanon, Syria, and the Palestinians, who meet with Israeli negotiators for the first time. The dialogue achieves little, but it creates a long-missing framework for talks.

1993-1994
Secret Israel-PLO talks in Norway yield the first deal between the two sides, the Oslo Accords. They recognize one another and chart a five-year plan for Israel to cede control of the territories to a new Palestinian Authority and Palestinian leaders to crack down on terrorism before a final peace agreement. Rabin and Jordan’s King Hussein sign another peace treaty a year later.

1995
Jewish extremist Yigal Amir assassinates Rabin, who in his second term had become a strong advocate of a two-state solution. The Oslo peace process sputters.

2001
A May report by former U.S. Sen. George Mitchell warns that the “greatest danger” in the Mideast is that “the culture of peace, nurtured over the previous decade, is being shattered.” After the 9/11 attacks, President George W. Bush makes no mention of the peace process in his 2002 State of the Union address.

2002-2003
As the United States builds a coalition to go to war in Iraq, Bush becomes the first U.S. president to call explicitly for an independent Palestinian state. The Saudis present an Arab League-endorsed peace plan, and the so-called Quartet — the United States, European Union, Russia, and United Nations — unveils a “road map” for peace that puts security ahead of a political agreement.

2007
With pessimism reaching new depths (“The peace process has no clothes,” writes Mideast analyst Nathan J. Brown), Bush hosts a conference in Annapolis between Israel and its Arab neighbors that enshrines the two-state solution. Hamas, which has seized power in Gaza and split with its rival Palestinian faction, Fatah, is not invited.

2008
An Israeli military offensive in Gaza wipes out dialogue between Israel’s Ehud Olmert and the Palestinian Authority’s Mahmoud Abbas.

Obama enrages Netanyahu by proposing that new negotiations start from pre-1967 borders with land swaps, while the Palestinians pursue statehood at the United Nations in lieu of talks. As 2012 begins, Mideast negotiator Ross recalls what Israeli official Dan Meridor once told him, “‘The peace process is like riding a bicycle: When you stop pedaling, you fall off.'” The Israelis and Palestinians, Ross says, “have stopped pedaling.”
Survey source: Hebrew University of Jerusalem and Palestinian Center for Policy and Survey Research