Despite the Republican claims that Obama's Iran policy is weak-kneed, the American public generally supports his wait-and-see approach. That is, of course, unless it doesn't work.

The poll-watcher analysis series on American public opinion on foreign policy is cross-posted at the Behind the Numbers blog.

President Barack Obama’s policy of sanctions and restraint with Iran is widely popular, according to a new Washington Post-ABC News poll, but few give him good ratings when it comes to the nation’s intent to develop nuclear weapons.

The issue has election-year implications on both foreign and domestic policy front, with more than eight in 10 Americans believing that Iran is trying to develop nuclear weapons. Back at home, rising gas prices are proving a drag on Obama’s approval rating on the economy, and providing a potent political weapon for the field of Republican challengers.

Obama has urged restraint with Iran and for allowing sanctions to put pressure on Tehran. “We have a window of opportunity where this can still be resolved diplomatically,” Obama argued last week after meeting with Israeli Prime Minister Benjamin Netanyahu.

Americans by a more than 2 to 1 margin favor a “wait and see” approach on Iran over immediate military action, according to the new poll. Fully 64 percent say it’s more important to see if economic sanctions work, even if it allows more time for Iran’s nuclear program to progress; only 26 percent support pre-emptive action to halt Iran’s progress. Majorities or pluralities across party lines prefer sanctions over immediate action, though Republicans are less supportive than Democrats or independents. 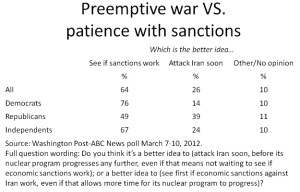 Sanctions may be a core tenet of his administration’s approach, but Obama is not reaping much of a reward being cautious. More than half of Americans, 52 percent, disapprove of Obama’s handling of the possibility of Iran acquiring nuclear weapons, while 36 percent approve. The negative assessment could be tied to the political realities of the moment: Most Americans think Iran is trying to get a nuclear weapon, and the Obama administration and U.S. allies have yet to ensure that, well, it won’t — and that it will live by its promise to pursue a peaceful nuclear program.

Roughly three quarters of Americans support increasing international sanctions to prevent Iran from obtaining nuclear weapons; even more favor direct diplomatic talks to try and resolve the situation. Support for diplomatic measures is high across the political spectrum, including majorities of Republicans, Democrats, and independents.

Americans’ hesitance to take direct military action — or for Israel to do the same — may be driven by a fear of igniting a larger conflict in the region. More than three quarters of Americans say a bombing attack by Israel would have a major risk of starting a larger war in the Middle East, and this group opposes bombing by nearly 2 to 1. Among those who are doubtful an Iran confrontation would spread throughout the region, a large majority support bombing Iran.

Different surveys have implied mixed conclusions about what the public wants on Iran, as we explored in February. Indeed, a new CBS News/New York Times poll finds a 51 percent majority favor military action against Iran, which seems to contradict the Post-ABC poll as well as a CBS/NYT poll last month — where only 15 percent thought Iran requires “military action now.”

The big differences are rooted in survey question wording. When Americans are offered a single solution to combat something they deeply oppose — Iran acquiring nuclear weapons — substantial numbers say they’re willing to use military force. But when given the choice of military intervention as well as economic sanctions, most opt for the diplomatic route.

America’s Dysfunctional Russia Policy Is Unlikely to Improve Under Biden