Why economic prosperity is still something of a mystery

Your humble blogger is currently knee-deep in a pedagogical project on the foundations of economic prosperity.  You can imagine my delight, then, that Daron Acemoglu and James Robinson have a new book coming out on that very topic:  Why Nations Fail: The Origins of Power, Prosperity, and Poverty.  There’s an excerpt in the Montreal Review — ...

Your humble blogger is currently knee-deep in a pedagogical project on the foundations of economic prosperity.  You can imagine my delight, then, that Daron Acemoglu and James Robinson have a new book coming out on that very topic:  Why Nations Fail: The Origins of Power, Prosperity, and Poverty.  There’s an excerpt in the Montreal Review — let’s see how it opens, shall we?

These striking differences are not ancient. In fact they did not exist prior to the end of the Second World War. But after 1945 the different governments in the north and the south adopted very different ways of organizing their economies….

It should be no surprise that the economic fortunes of South and North Korea diverged sharply. Kim Il-Sung’s command economy soon proved to be a disaster. Detailed statistics are not available from North Korea, which is a secretive state to say the least. Nonetheless, available evidence confirms what we know from the all too often recurring famines: not only did industrial production fail to take off but North Korea in fact experienced a collapse in agricultural productivity. Lack of private property meant that few had incentives to invest or exert effort to increase or even maintain productivity. The stifling repressive regime was inimical to innovation and adoption of new technologies. But Kim Il-Sung, his son and successor, the “dear leader” Kim Jong-Il, and their cronies had no intention to reform the system, or to introduce private property, markets, private contracts, and economic and political freedoms. North Korea continues to stagnate economically, and there is no sign that anything will be different under the new “dear leader” Kim Jong-un.

Meanwhile in the south economic institutions encouraged investment and trade. South Korean politicians invested in education, achieving high rates of literacy and schooling. South Korean companies were quick to take advantage of the relatively educated population, the policies encouraging investment and industrialization, the export markets, and the transfer of technology. South Korea became one of East Asia’s `Miracle Economies,’ one of the most rapidly growing nations in the world. By the late 1990s, in just about half a century, South Korean growth and North Korean stagnation led to a tenfold gap between the two halves of this once-united country—imagine what a difference a couple centuries could make. The economic disaster of North Korea, which not only prevented growth but led to the starvation of millions, when placed against the South Korean economic success, is striking: neither culture nor geography nor ignorance can explain the divergent paths of North and South Korea….

It will not shock you, my dear readers, to learn that I agree with Acemoglu and Robinson.  Indeed, as Ezra Klein showed with the following chart, the divergent paths of North and South Korea represents ironclad evidence about the power of instituions to determine prosperity:

Well, that’s pretty damn persuasive, isn’t it?  It seems pretty friggin’ obvious which institutions work and which ones don’t!

Actually, to be more accurate, it seems pretty friggin’ obvious now.  Here’s another chart that extends that graph back another two decades: 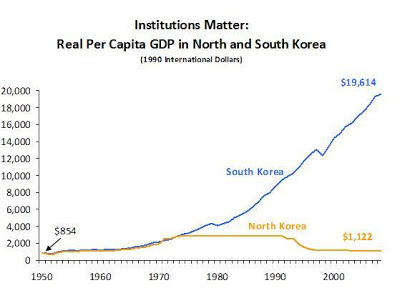 Things look sightly different in this chart.  That massive divergence is still there, but what’s stunning is that for the 25 years before that, the DPRK and ROK looked exactly the same in terms of per capital income.  Indeed, as Nicholas Eberstadt notes:

Around the time of Mao Zedong’s death (1976), North Korea was more educated, more productive and (by the measure of international trade per capita) much more open than China. Around that same time, in fact, per capita output in North Korea and South Korea may have been quite similar. Today, North Korea has the awful distinction of being the only literate and urbanized society in human history to suffer mass famine in peacetime.

My point here is not to defend Kim Il Sung or suggest that the DPRK’s economic institutions are underrated.  Rather, my point is that as data analysts, we’re all prisoners of time.  Had Acemoglu and Robinson written Why Nations Fail in the mid-1970s, it would have either made a different argument or it would have had a much tougher case to make about the merits of inclusive vs. extractive institutions (during the 1970s, commodity extracting states were looking pretty good).

Keep these charts in mind whenever anyone confidently asserts the obvious superiority of a particular model of political economy.  Because, I assure you, there was a point in time when such superiority was far from obvious.  And there might be another such point in the future.