While, for now unsubstantiated, coup rumors sweep China, a very real coup is underway in Mali. Renegade troups have appeared on state television to announce that they have taken power away from President Amadou Toumani Toure, who they say inadequately supported them in the fight against an ongoing insurgency by Tuareg rebels in the country’s ...

While, for now unsubstantiated, coup rumors sweep China, a very real coup is underway in Mali. Renegade troups have appeared on state television to announce that they have taken power away from President Amadou Toumani Toure, who they say inadequately supported them in the fight against an ongoing insurgency by Tuareg rebels in the country’s north. The army has apparently shut the borders and the whereabouts of Toure, who has been in power since 2002, are unknown. Soldiers are reportedly looting the presidential palace.

Twitter’s probably the best way to stay on top of the fast-moving story at the moment. Alex Thurston’s Sahel Blog has some good suggestions of feeds to follow as well as some valuable quick analysis.

Given that it was only two years ago that the government of neighboring Niger was overthrown in a military coup, and just weeks since President Mohamed Nasheed of the Maldives was forced from office — he claims — at gunpoint, it’s tempting to wonder whether military coups, which are often seen as a relic of Cold War ideological struggles, are returning to the world stage. (The SCAF’s seizure of power in Egypt certainly exhibits some classic coup characteristics as well.)

So are we returning to a Cold War era level of coup occurence? Not really. Political scientists Nikolay Marinov and Hein Goemans plotted out this chart for their research on coup frequency in 2009: 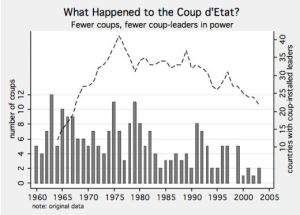 As you can see, the two successful coups we’ve had this year were essentially the baseline throughout the 60s and 70s. Moreover, the coups that do happen today are more likely to end in at least semi-democratic elections. As Thurston writes of Niger:

Soldiers in Niger intervened to “reset” the civilian democracy after President Mamadou Tandja manipulated the constitution to stay in power. There was no war in Niger at the time. But in light of the coup in Niger, it is not surprising that the coup leaders in Mali have taken on the rhetoric of democracy, naming themselves the National Committee for the Restoration of Democracy and State (CNRDR) and saying, “We promise to hand power back to a democratically elected president as soon as the country is reunified and its integrity is no longer threatened.”

They may well make good on this promise. If the coup succeeds, there will be massive pressure – in a sense there already is – for Mali to hold elections. In Niger, although again, the situation was different, soldiers were in power for slightly longer than a year before organizing new elections.

Similarly, the Hondruan military leaders that overthrew the government of Manuel Zelaya in 2009 organized elections later that year. There are still a handful of governments run by leaders who took power in recent coups — Fiji, Mauritania, and Madagascar, for instance — but it’s pretty rare. (The political future of the Maldives is still very much unsettled.)

The African Union said the “act of rebellion” was a “significant setback for Mali”.

Kenya’s Foreign Minister Moses Wetangula and his delegation are stranded in the country, as Bamako’s airport is closed, after attending an AU meeting on peace and security.

Additionally, the U.S. has pledged its support to Mali’s previous government, and former colonial power France has suspended security cooperation since the coup.

All this means that if Mali’s new military rulers are successful in their putsch, there will likely be enormous pressure to go ahead with the presidential election that was already scheduled for next month, and indeed they have already pledged to do so. Of course, with Tuareg rebels making major gains in the north of the country, a return to stability may be too much to hope for.

China Wants to Be Lebanon’s Savior