An Occupy Wall Street leader highlights the global reach of his movement. 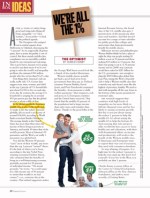 In his call for Occupiers to “stop whining,” Charles Kenny (“We’re All the 1 Percent,” March/April 2012) mocks the victims of the recession, fails to comprehend global social movements, and feebly attempts to resurrect a reactionary, 19th-century narrative of nationalist class collaboration to discourage popular resentment about the economic crisis.

Out of either ignorance or malice, Kenny portrays the Occupy movement as exclusively concerned with domestic issues without realizing that Occupy groups exist on every continent. When we speak to activists from Colombia, Egypt, Indonesia, or Serbia, they don’t castigate our efforts because of American wealth; they ask, “What took you so long?” Organizers from the Global South have no misconceptions about American affluence, and for that very reason they emphasize the interconnectedness of our struggles against economic exploitation. When the Nigerian government eliminated fuel subsidies in January, the people didn’t turn to policy institutes. They organized Occupy Nigeria.

If Kenny were tens of thousands of dollars in debt from medical bills and struggling to find a job, would he consider himself “really, really rich”? Certainly such rhetoric will generate some high-fives around Kenny’s think tanks, but the American people aren’t taking the bait.

It is great to hear that the Occupy movement is concerned with global inequality, not just inequality within the United States. And it would be wonderful to see a global social protest that really did focus on the world’s poorest. In that spirit, it might be worth clarifying two things.

First, it is wrong that anyone, anywhere, should get into tens of thousands of dollars of debt just to afford decent health care. But people in absolute poverty don’t even have that option — because nobody would ever lend them that much. The total lifetime income of someone on a dollar a day is likely to be around $20,000. They all too often die of conditions that can be cured for a few dollars’ worth of antibiotics. And they don’t usually own cars or generators either, so they benefit comparatively little from cheap fuel. General fuel subsidies in Nigeria paid out a lot more to the relatively rich than to the relatively poor.

Second, economist Branko Milanovic estimates that in the mid-19th century (the days of imperial officials telling people to stop whining), about half of global inequality could be accounted for by unequal incomes within countries and the other half by inequalities in average incomes across countries. Today, fully 80 percent of global inequality is due to differences in incomes across countries, which dwarf the gap between rich and poor within countries. So if there is a global class system, it is one where the upper class is made up of people in rich countries, and the working class of people in poor countries. Want to help the world’s downtrodden? Tax the average American and send the money to the average Malawian.

Pacifists Are Vulnerable to Fascism’s Whispers