Sex and the Single Mullah

Islamic scholars are prepared to answer questions and issue fatwas on almost any realm of modern life. Sometimes, it can get a little kinky.

As Karim Sadjadpour recounts in his new article for Foreign Policy, an obscure cleric known as Ayatollah Gilani had a popular television show in the early days of the Iranian revolution during which he would opine upon the halal or haram status of various outlandish scenarios. His best-remembered went like this:

Imagine you are a young man sleeping in your bedroom. In the bedroom directly below, your aunt lies asleep. Now imagine that an earthquake happens that collapses your floor, causing you to fall directly on top of her. For the sake of argument, let’s assume that you’re both nude, and you’re erect, and you land with such perfect precision on top of her that you unintentionally achieve intercourse. Is the child of such an encounter halalzadeh (legitimate) or haramzadeh (a bastard)?

(It’s halalzadeh in case you were wondering.)

In another famous broadcast, Gilani allegedly recalled being sexually aroused in the back seat of his chauffeured car after catching site of a few inches of a woman’s exposed ankle on the street. Naughty.

In his 1961 book, A Clarification of Questions, the supreme leader aimed to set out his position on 3,000 questions of everyday life, though “everyday” might be pushing it for some of them. Most famously, the ayatollah ruled that “If a person has intercourse with a cow, a sheep, or a camel, their urine and dung become impure and drinking their milk will be unlawful.”

The ayatollah also ruled that “Industrial alcohol used for painting doors, tables, chairs, etc., is clean if one does not know it was made of something inebriating” and, as apparently a fan of rudimentary in vitro fertilization, that “It is not unlawful to introduce a man’s semen into the uterus of his wife with devices such as suction cups.”

In 2007, Atiya was responding to a question of whether it’s permissible for a woman to work alone with a man in an office setting, or reveal her hair in front of him. His not-so-elegant solution was that such an arrangement would be acceptable if the woman fed the man “directly from her breast” at least five times, thus making them essentially family members.

“Breast feeding an adult puts an end to the problem of the private meeting, and does not ban marriage,” he ruled. “A woman at work can take off the veil or reveal her hair in front of someone whom she breastfed.”

Atiya was widely mocked for the ruling and withdrew the fatwa after he was disciplined by his university, blaming it on “bad interpretation.” The controversy prompted Egypt’s minister of religious affairs to call for future fatwas to “be compatible with logic and human nature.”

“We don’t have to take our clothes off to have a good time,” promised a U.S. pop hit of the 1980s. Khalil would apparently agree. In 2006, the scholar ruled that being completely naked during sex would invalidate a couple’s marriage.

Other scholars quickly disputed the ruling, saying that “anything that can bring spouses closer to each other” should be encouraged. Yet another scholar suggested it was OK for the couple to be naked — as long as they avoided looking at each other’s genitals.

Other clerics disagree, such as Muhammed Saeed of the popular South African Islamic advice website Madressah Arabia Islamia, arguing that “It does not behoove a Muslim to use for such a filthy purpose the same mouth that he/she uses for the tilaawat of the Qur’aan.”

In response to a question from a reader about the permissibility of oral sex with a condom, the website IslamWeb noncommittally advises that, “We cannot authoritatively say that this act is forbidden or that the person who does so is sinful, especially with the use of a condom which prevents the impurity from touching the mouth.”

Getting frisky in the vegetable aisle

“A woman can get much benefit from these vegetables and other elongated objects,” the imam said, listing pestles, bottles, and root vegetables among other suggested implements.

A scholar at Saudi Arabia’s top religious council got a lot of attention last year for warning that allowing women to drive cars would lead to the “end of virginity.”

But the chairman of a renowned Islamic seminary in India took aim last year at an even more insidious threat: Girls on bicycles. “When a grown-up girl goes cycling outside her house, it is bound to result in bepardagi [undue exposure],” he said. “Even medical science has given us evidence to believe that cycling is not good for adolescent girls, physically. Apart from affecting their femininity, it is harmful for their body structure.” 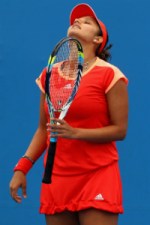 Too sexy for this tennis court

India’s best ever female tennis star and the first Indian to ever win a World Tennis Association event, Sania Mirza, became a huge celebrity in her home country. But, as Mirza came from a devout Muslim family, the standard women’s tennis attire of short skirts and tight T-shirts vexed religious authorities, and in 2005, a group of Muslim clerics issued a fatwa urging her to cover up.

“The dress she wears on the tennis courts not only doesn’t cover large parts of her body but leaves nothing to the imagination,” said Siddiqui. The board suggested that she wear long tunics and headscarves like those sported by Iranian badminton players.

Mirza got in trouble with secular authorities as well in 2011 when a court complaint was filed against her for disrespecting the Indian flag by putting her bare feet near it.

Lady Gaga might not be the first pop star to upset religious conservatives, but her condemnation from Indonesia’s top religious authority prior to a planned concert in the country was notable for its specificity. “She is from the West, and she often shows her aurat [genitalia] when performing,” Ridwan said, taking offense to the “Bad Romance” singer’s “revealing outfits and sexualized dance moves.”

Just in case you were wondering how such a pious religious authority came to know so much about Gaga’s routine, he claimed he had never seen one of her performances … but was aware of her “reputation.”

NEW FOR SUBSCRIBERS: Want to read more on this topic or region? Click + to receive email alerts when new stories are published on Economics, Health, India, South Asia, Middle East and North Africa