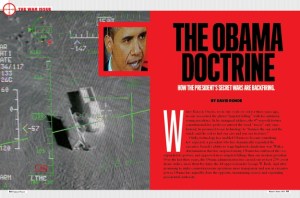 Our research suggests that in terms of affecting Taliban- and al Qaeda-initiated terrorism within Afghanistan and Pakistan, drone strikes at best have no effect and at worst increase terrorist activities in the short run. Using data from January 2007 to September 2011, we find that terrorist attacks by al Qaeda and the Taliban in Afghanistan are essentially unaffected by drone strikes. On the other hand, we find that in the weeks following a drone strike, terrorist attacks by the Taliban and al Qaeda increase in Pakistan. This effect is even stronger when we look separately at drone strikes that were successful in killing their targets.

Although drone strikes may serve a variety of strategic purposes, our research indicates that they are not successful at reducing al Qaeda and Taliban terrorism within Afghanistan and likely increase terrorism within Pakistan in the short term. If a more secure Pakistan is one of the Obama administration’s strategic goals, it would appear that drone strikes are, indeed, backfiring.

I thank Zahra Siddique and David Jaeger for their letter and research. Their study is a valuable contribution to the ongoing debate regarding the impact of drone strikes. In my article, I cite U.S. officials who contend that Pakistani military officials privately say CIA drone strikes help combat militancy. I argue that the key to eradicating militancy is having Pakistani ground forces move into the tribal areas.

In multiple stories over the past several years, I have said drone strikes create a stalemate in which militants are unable to increase their attacks, but drone attacks fail to fully eradicate militant groups. Siddique and Jaeger’s research appears to back up that conclusion.