If, that is, the economists were in charge.

If there's one thing economists don't like, it's politics. We can draw up any number of fantastic policies on paper, but getting them through legislatures and central bank committees is another story. Politics has been a big part of the problem in Greece. Not only are the politicians there incapable of choosing a way out of the fiscal crisis they created; they can't even form a government. But what if economists were in charge?

With politicians pushed aside, economists could offer at least five paths, some of them not mutually exclusive, out of Greece's current straits. Here's how they would work.

If there’s one thing economists don’t like, it’s politics. We can draw up any number of fantastic policies on paper, but getting them through legislatures and central bank committees is another story. Politics has been a big part of the problem in Greece. Not only are the politicians there incapable of choosing a way out of the fiscal crisis they created; they can’t even form a government. But what if economists were in charge?

With politicians pushed aside, economists could offer at least five paths, some of them not mutually exclusive, out of Greece’s current straits. Here’s how they would work.

1. Default officially. Greek bonds have been trading at huge discounts for months now, and negotiations to reduce the Greek government’s debts have been running non-stop behind the scenes. Puzzlingly, however, the government has continued to pay all the interest owed to select groups of creditors. An official default would allow Greece to go through a more orderly sort of bankruptcy process, determining the “seniority” of various claims — basically, which ones get paid first — and then negotiating with creditors while payments remained frozen. Afterward, Greece would have a hard time borrowing from global credit markets for some time, perhaps several years. Its leaders would have to form a durable government, which in turn would have to demonstrate the ability to spend responsibly in order to win back the markets’ confidence.

Sounds tough — but by no means impossible. Many countries in Latin America managed to return to global credit markets within a few years of defaults in the 1980s and 1990s. Others have taken their time. Argentina has had a rocky relationship with its creditors since defaulting on its debts in 2001, and recent discussions about returning to the markets have been soured by the renationalization of energy company YPF and fears about inflation and budget deficits. Of course, Argentina’s commodity wealth has allowed the country to grow quickly without the markets’ help for a decade since the crisis; resource-poor Greece might not be so lucky.

2. Drop the euro. The euro is a huge obstacle to Greece’s return to fiscal health. In a country with its own currency, a government can use inflation to reduce the value of its debts relative to its tax revenue. Issuing more currency makes prices and wages rise, but the amount owed to debtors stays the same. The Greek government can’t issue more euros, however; only the European Central Bank can. Nor can the Greek government depress the value of its currency to help its exports, a common strategy for hastening an economic recovery.

A return to the drachma would put the tools of monetary policy back in Greek hands. It would almost certainly lead to a default, too, since the government would have a hard time putting together enough depreciated drachmas to pay its euro-denominated debts. But after an initial scare, the country would be well equipped for future growth. Tourism and other exports would undoubtedly benefit from having a flexible currency, as would purchases of Greek assets by foreigners.

3. Raise taxes. At the moment, the Greek government’s revenue is about 42 percent of GDP. That’s a middling-to-low figure for the euro area, where the IMF predicts that Belgium, Finland, and France will all top 50 percent this year. Raising tax rates and improving tax collection could bring the government’s revenue more in line with its spending and eventually balance the budget.

Fans of the Laffer Curve might argue that raising tax rates wouldn’t necessarily result in higher revenue. But, experienced and skilled as the Greeks appear to be in avoiding taxes, there’s evidence that the country is still on the left-hand side of the Laffer curve. In fact, a recent study suggests that Greece could enhance its revenue by up to 5.6 percentage points of GDP before the curve started to slope downward. 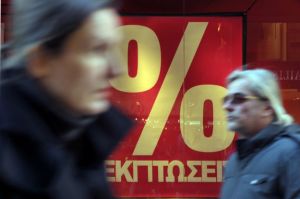 4. Cut spending. The Greek government has come under enormous pressure to cut spending in exchange for EU and IMF bailouts. Right now, the budget deficit is still about 7 percent of GDP and on track to stay around 5 percent in the long term. That’s already a lot lower than the 11/10 percent figures of two years ago. Like them or not, more cuts would finish the job.

Of course, cuts could also hamper the Greek economy’s recovery by doing away with government jobs and spending in other areas. With such little confidence in Greece amongst investors and corporate managers, it’s hard to believe the private sector would instantly fill the gap. Cuts would end the fiscal crisis, but not the broader economic one; stagnation in Greece could drag on for several more years as a result.

5. Liquidate. Though a small country, Greece has a lot of valuable stuff. Its monuments are recognized around the world. Its countryside and beaches are beautiful. Its museums are filled with the riches of early Western civilization and some of the East as well. And for a small country, it has a lot of fancy embassies and consulates dotting the globe, not to mention the snazzy military hardware it has bought at a higher rate than China. All of these assets can be sold, and indeed some of them already have been. But there’s a further step — selling the country.

When a company goes bankrupt, its creditors have the option of chopping it up into pieces to recoup their debts and claim their shares. Greece could do the same, offering all or part of itself to other countries in Europe and beyond. Along its northern and western edges are large, ethnically Albanian, Macedonian, and Turkish communities that have occasionally been the subject of extraterritorial claims by groups in neighboring countries. These countries might be willing to pony up a lot of cash in return for a change in Greece’s borders. Foreign billionaires who enjoy their Mediterranean holidays might also be persuaded to pick up an island or two. There’s plenty of precedent for cash-for-land deals — Seward’s Icebox, anyone?

More likely, the threat of liquidation would encourage Greek voters to consider the other four options more seriously. But that’s a ploy for politicians.

Europe Doesn’t Need the United States to Defend It Anymore

Ukraine Wants to Retake Crimea. The United States Should Lend Its Support.