The Name Is Bond. Eurobond.

Europe's debt crisis gets a new potential hero, with Germany once again cast in the role of villain.

The word on the lips of many of the 17 leaders of the eurozone following this week’s meeting of heads of state — the 18th summit, for those who are counting — is Eurobonds. The ideas behind them, though, are out of sync. “Europe can have Eurobonds soon,” Italian Prime Minister Mario Monti insisted. “[The] taboo surrounding Eurobonds has been lifted,” a European Commission official declared. Not so fast, German Central Bank chief Jens Weidmann chimed in, “It is an illusion to think Eurobonds will solve the current crisis.”

So, what exactly is a Eurobond? Briefly put, it is a tool intended to collectivize debt across all eurozone countries. Right now, to raise funds, eurozone members have only one option: selling national bonds. The market determines the value of these bonds based on each country’s fiscal and economic health. The problem is that as some European countries were roiled by a national asset bubble (Ireland) or experienced a decade of lackluster economic growth while racking up unsustainable levels of debt (Greece and Portugal), they became unable to tap private markets, and their existing debt became prohibitively expensive to pay back. To service their debt, these countries had to receive funds from the International Monetary Fund, the European Central Bank, and the European Commission. But with the crisis deepening and spreading to Italy and Spain, it looks like another solution is required: the Eurobond.

In theory, Eurobonds would allow debt-ridden countries like Greece to borrow at more affordable interest rates. For instance, according to the Guardian newspaper, if Eurobonds were adopted, Portugal would see its annual debt repayments fall by as much as $18 billion or 9 percent of GDP. Other struggling European countries, such as Italy, Spain, or even France, would likely see similar savings.

But even as Eurobonds relieved the crisis in the periphery, they would increase the borrowing costs of countries in better financial health. For example, according to the same article, if Eurobonds were introduced, Germany’s borrowing costs would rise above the current eurozone average, costing Berlin an extra $62 billion, or 2 percent of GDP, per year to service its debt.

What prevents the wealthier countries, or more specifically Germany, from getting to yes on Eurobonds? In a nutshell, moral hazard: If Greece, Ireland, Italy, Portugal, and Spain were allowed to borrow at lower rates, the market pressure to implement deep and difficult structural reforms would disappear.

The path to European redemption, according to German leaders and the European Central Bank, must only come through difficult reforms and fiscal discipline, not the same sort of low-cost borrowing that got the periphery countries into their current difficulties. This moral hazard argument was precisely why Germany demanded a fiscal compact treaty (which maintains strict fiscal debt and deficit limits) in December in return for additional bailout funds.

There are also legal arguments against Eurobonds. At present, EU treaties expressly forbid joint debt liabilities within the monetary union. The introduction of Eurobonds would require several treaty amendments and very likely ratification by eurozone members. Eurobonds are likely also unconstitutional in Germany, and would require at least 10 legal changes, according to the Guardian. Sorting out the legal and political challenges could take years.

The Eurobonds debate also extends to the form and scope of these bonds. Since 2000, there have been at least six different proposals on how to structure a Eurobond. To simplify, we place the Eurobond discussion into three separate categories:

Door No. 1 is the maximalist definition of Eurobonds, requiring that all 17 eurozone countries completely mutualize their current stock of debt and issue common bonds. In other words, they would ensure joint guarantees, meaning that each member state not only pays for itself but also the obligations of any other country — say, Greece — unable to meet its liabilities. Germany hates this door, but it would do the most to mitigate market pressures on the periphery. 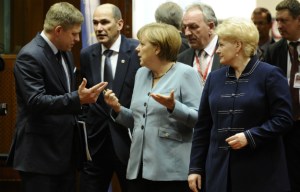 Door No. 2 seeks to tackle the moral hazard question by creating a mix of national bonds and Eurobonds. The fundamental disagreement is on the degree of the mix. The greater the proportion of Eurobonds, the less market pressure a country faces, thereby discouraging demanding but necessary reforms. Too great a percentage of risky national bonds, and you have defeated the purpose. The most commonly discussed proposal is a 60/40 Eurobond/national bond split so that member states that stay within a ratio of 60 percent debt to GDP (a rule enshrined in the fiscal compact treaty) will receive Eurobonds; anything over that amount and market forces will punish. No one has a clue how to manage this scenario, let alone how long it will take to create the mechanisms to do it. 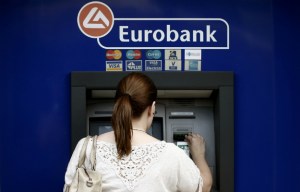 Door No. 3 is called the European Debt Redemption Fund. This variation would involve joint guarantees by the 17 eurozone countries for any national debt exceeding the 60 percent debt-to-GDP ratio. Each individual country would still be held accountable for the majority of its debt, and the European Commission would take responsibility only for a set period of time, after which member states would be required to reassume their liabilities.

The perfect Eurobonds would be an instrument with a mandate broad enough to halt the crisis but punitive enough to mitigate the risks of moral hazard — a tall order. To say that you support Eurobonds could mean a variation of the aforementioned options, all fraught with complexity. If European decisionmaking to date tells us anything, it is that the least-common-denominator, minimalist option eventually will be selected, but too little and too late to effect change.

One variation on the Eurobonds idea that has gained traction in recent weeks is something called “project bonds” — financial instruments backed by the EU budget that can be used to finance infrastructure projects relating to energy, transportation, communication, and information networks. The idea, which the European Parliament has reached agreement on, offers a way to stimulate growth in the peripheral eurozone countries as they continue to implement structural reforms. Promisingly, $293 million of EU capital has been reserved for this effort, with more on the way should it prove successful.

But while project bonds can help attract private-sector investment, they cannot be a substitute for it. It is likely that these project bonds would only support about 10 projects throughout the EU until 2014 — hardly a panacea.

Moreover, collectivized debt in the form of a Eurobond won’t reduce the overall levels of European sovereign debt, solve Europe’s structural problems, right trade deficits, improve competitiveness, stimulate long-term growth, or reverse public indebtedness. And that is exactly what countries like Greece and Spain need to do, as painful as it will be.

What Eurobonds can do, given the right formulation, is stall an escalating crisis — an outcome that would be greeted with a sigh of relief in Washington, Beijing, and other world capitals in the near term. But the crisis will only come back with a greater vengeance, likely consuming Europe’s stronger economies with it.

Of course, at the end of the day, the decision on whether or not to introduce Eurobonds rests with the area’s strongest economy: Germany. To put it another way, is Germany willing to transfer its wealth, increase its borrowing costs, and increase inflation to save indebted European nations, or isn’t it?

Why Belarus Is Not Ukraine

Trump Misses Being Part of the Iran Deal