The more than half a million foreigners living in China exist in a legal and ethical gray area. Over the past 60 years, the Communist Party has often attempted to keep foreigners at a distance. In the 1980s foreigners shopped at special supermarkets in Beijing, buying goods that were forbidden to most locals. Today, expats can live in the same apartment buildings, shop in the same stores, and even get cozy with Communist Party officials, as the murder of former Bo Xilai confidant Neil Heywood revealed. Chinese police tend to be more lenient to (non-African) foreigners than to locals, wary of provoking international incidents; foreign journalists receive far more leeway to write and report than their domestic counterparts. Chinese companies will even hire white expats to pose as company executives, simply for the business a Caucasian face brings. This gap, however, might be closing. 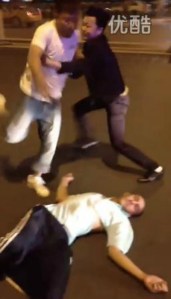 On May 8, Chinese Internet user “Ajian” uploaded a video to Youku, China’s largest video sharing site, of a British man sexually assaulting a Chinese woman on the streets of Beijing. A man in a black jacket leads him away from the woman. In the next scene, the same man beats him senseless in the middle of the street. You can hear Ajian breathing heavily and cursing the Briton behind the camera. Viewed more than 11 million times, the video seems to have inspired a city-wide campaign to catch and prevent foreigners from behaving badly. 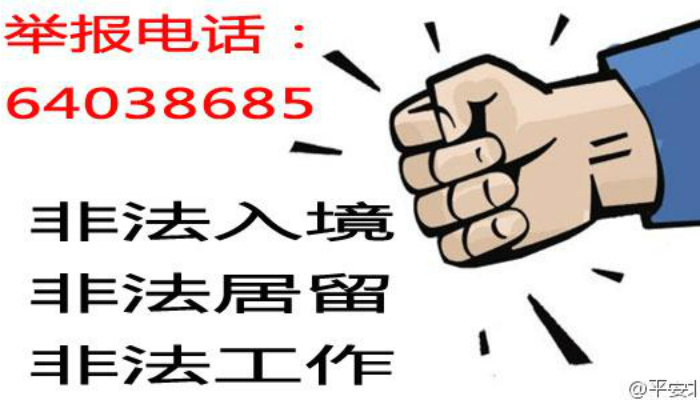 The Communist Party likes numbered slogans. Mao led the “Three-Anti” and “Five-Anti” campaigns in the early years of the People’s Republic of China (PRC) to root out enemies of the state, then attempted to destroy the “four olds” during Cultural Revolution; then-President Jiang Zemin introduced the socio-political ideology the “three represents” in 2000.

A week after the Briton’s assault, Beijing announced a three-month campaign to “clamp down” on foreigners. The cartoon above, which the Beijing Municipal Public Security Bureau (PSB) posted on its Weibo account @PeacefulBeijing, shows a fist slamming down on those engaged in the “three illegals”: entering the country illegally, residing illegally, and working illegally. Under the new directive, police may ask foreigners to present their passports and papers, targeting “communities believed to have large numbers of such aliens.” The cartoon contains a phone number that citizens can call to report suspicious foreigners. 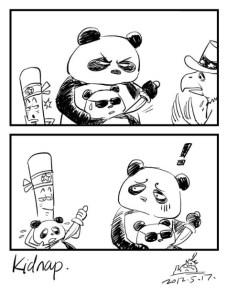 Anti-foreigner sentiment exists throughout China. Some netizens voiced their support for bringing the campaign to Shanghai, which has more than 200,000 foreigners as of 2010, nearly double that of Beijing. Surprisingly, the Yanbian PSB in the northeast province of Jilin announced its own drive to track down unwelcome foreigners on May 23, according to the magazine Youth Focus Weekly‘s Weibo account.

Yanbian shares a border with North Korea, and thousands of North Koreans live and work in Yanbian; others who defect pass through Yanbian on their way to Thailand, Mongolia, and South Korea. A few weeks ago, North Koreans captured 29 Chinese fishermen and held them for the un-princely ransom of 1.2 million yuan (about $189,000) in a rare public spat between the two allies.

“Our comrade-in-arms has stabbed us in the back,” wrote blogger Wang Sixiang, reacting to the news. The cartoon above, drawn by cartoonist Rebel Pepper, shows China holding the blind human rights activist Chen Guangcheng hostage; in the next panel, North Korea is holding a Chinese citizen hostage. The website See China gives the cartoon the title “Little Brother, You Learn Quick!” Although the fishermen were eventually released, Beijing has tried to manage the resulting public anger: notably, not a single comment has been left on Youth Focus Weekly‘s post, likely because of deletion. 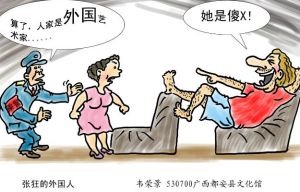 On May 16, a train passenger captured video of Oleg Vedernikov, the Russian-born principal cellist of the Beijing Symphony Orchestra, refusing to take his feet off a woman’s seat. The woman thrashed his bare feet with a newspaper, telling him “You’re truly losing face for your country!” But Vedernikov just smiled and called her a “foolish cunt” in fluent Mandarin. Viewed more than 3.6 million times on Phoenix New Media’s video sharing site, the incident was seen by many Chinese as an example of foreigners’ preferred treatment.

In the above cartoon, entitled “Insolent Foreigner” and drawn by cartoonist Wei Rongjing for China’s largest circulation English-language newspaper China Daily, the porter tells the women, “Forget it, he’s a FOREIGN artist.” Responding to angry online calls for his dismissal, Vedernikov issued a video apology on May 17 — in Russian. In late May, the orchestra removed him from his post for his “uncivilized behavior.” 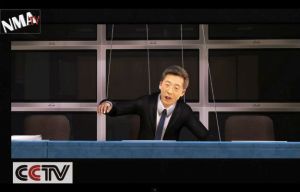 Surprisingly, as he’s supposed to be one of the faces China shows to the world, the CCTV English host Yang Rui has been particularly outspoken against foreigners. On May 18, he wrote a screed on Weibo, since deleted, saying, “Foreign spies seek out Chinese girls to mask their espionage and pretend to be tourists while compiling maps and GPS data for Japan, Korea and the West” and cheering that “we kicked out that foreign bitch,” Al-Jazeera reporter Melissa Chan, who left China in May after the government refused the routine renewal of her press credentials.

Many Western commentators, including the Atlantic‘s James Fallows (who had made several appearances on Yang’s show), called foul. Yang did issue an apology, but went on to attack Fallows, commenting, “I seriously question his judgment on this particular matter and perhaps the ability to practice good journalism in China.” (This post was also later deleted.) Perhaps the most memorable riposte to Yang comes from Next Media, the Taiwanese company known for its critical views toward the mainland and its creative animations. In this video, from which the image above is taken, Yang Rui is shown as a puppet manipulated by a panda wearing an emblem of the Chinese state.

Just as foreigners are often cast as villains in China, they sometimes appear as heroes. A few days before “Aijan’s” video went viral, a Good Samaritan appeared. Weibo user @MovieFactory saw a young man buy McDonald’s fries to share with an old beggar woman in Nanjing, sitting and chatting with her. “This is the most love-filled story I’ve seen today,” MovieFactory glowed. “Re-tweeted” nearly 38,000 times, this “handsome American” was soon identified as Jason Loose of Los Angeles, a student at Nanjing University. Although Loose claims he didn’t do anything special, Chinese netizens see in him an altruism lacking in their own society.

Chinese netizens sometimes compare foreigners to their own aloof citizenry. The contrast was especially startling last October, when the country watched horrifying footage of a toddler run over twice in a Guangdong street and left ignored by passersby for seven minutes before someone came to her aid. The little girl, Yueyue, died after struggling in the hospital for a week. On the same day, Uruguayan expat Maria Fernanda jumped into West Lake in Hangzhou to save a suicidal Chinese woman from drowning.

Weibo user @LiTingBalinda noted that while Fernanda was rescuing the woman, “the Chinese just gathered and watched; and when they came out of the water and the woman’s life was in the balance, the Chinese people took out their cellphones to take pictures. What kind of sick society is this?”