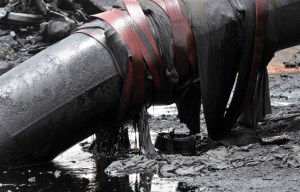 Major new global oil and gas discoveries have energy experts describing a new golden age of petroleum. But enthusiasm for this projected future of bountiful oil has contributed to a marginalization of environmental concerns. Here are ten emerging oil and gas players that could undermine global carbon reduction targets.

The Athabasca Oil Sands are thought to contain 1.7 trillion barrels of crude bitumen, a form of petroleum. About 10 percent of this — 169 billion barrels — may be recoverable. Commercial production began in 1967 and today, some 1.6 million barrels a day of the bitumen are currently exported to the United States, and energy giant TransCanada wants to build a new Keystone XL Pipeline to add 700,000 barrels more. NASA scientist James Hansen has argued that if the expansion goes through, it will be “game over” for the earth’s climate.

The offshore Campos and Santos basins, discovered respectively in 1974 and 2007, producing some 2.5 million barrels of oil a day and containing a total of around 100 billion barrels, have turned semi-public Petrobras into one of the largest oil companies in the world.

About 37 miles off the West African coast, the Jubilee Field was discovered by Britain’s Tullow Oil in 2007. With proven reserves of 600 million barrels, it is the largest West African find of the last decade. Tullow currently produces roughly 70,000 barrels a day from the field.

A trio of Eastern Mediterranean fields straddling the two countries contains enough gas to turn both countries into significant exporters. To capitalize on the finds in 2009 and 2010, the Israelis will have to overcome domestic resistance to exporting the country’s gas, and the problem of how to secure the offshore fields in a politically tense region.

After Tullow Oil’s Ghana find, it decided to cross the South Atlantic Ocean and find out whether West Africa’s 100-million-year-old geology is similar to that of eastern South America. In French Guiana, the company discovered Zaedyus, a “twin basin” to Ghana’s Jubilee Field, in September 2011. With 700 million barrels of oil, Zaedyus has also led to exploration in Guyana and Suriname, the other two nations in South America’s so-called Equatorial Margin.

The Bakken shale was first discovered in 1953 but drilling didn’t begin until 2000. The region has been the most surprising recent story in U.S. energy, with its production rising from 60,000 barrels a day five years ago to about 500,000 today. The Bakken is projected to double that volume by the end of the decade.

Norway’s North Sea oil industry was thought to be stagnating, but major discoveries the past year have changed minds. The Aldous field may hold up between 500 million and 1.2 billion barrels of recoverable reserves. The Barents Sea’s Skrugard field looks to have a similar volume. Nearby finds in Norway’s Arctic zone may be even larger.

The discovery of oil in the Dharoor Valley Basin last month has added a new wild card element to peace negotiations in this perennial conflict zone. Mogadishu has tried to downplay the economic significance of the find as it battles an Islamist insurgency.

Located just ten miles offshore, the Rovuma Basin, straddling these two east African nations, contains the natural gas equivalent of some 7.5 billion barrels of oil, discovered in 2010. The gas was discovered in both countries in stages since last Winter. That makes it a potential leading supplier to Asia. Japan, in particular, is craving liquefied natural gas since shutting down all of its nuclear reactors in the wake of the Fukushima disaster.

As a founding member of OPEC, Venezuela’s not exactly a new player on the oil scene. But even though the Orinoco Oil Sands hold the world’s largest oil reserves — 513 billion barrels, nearly double those of Saudi Arabia – the country’s energy sector has not reached its export potential thanks to persistent meddling by President Hugo Chavez’s government. With Chavez ailing from cancer, some expect the country’s production to rise if he should leave the scene.