Everything in Syria Is Going to Plan

It just depends on whose plan you're talking about.

If you don’t know where you’re going, the old saying goes, any road will get you there.

The conventional wisdom on Syria has it that the external actors to the tragic drama playing out these many months don’t know what to do, have no end game, and are thus incapable of acting alone or in concert to end the killing and create an effective transition to the post-Assad era.

But that’s wrong. The key actors — America, Russia, Turkey, Iran, and the Arabs — know precisely what they’re about (or at least what they want to avoid) and are acting quite willfully to attend to their own interests.

In short, we have a coalition not of the willing but of the disabled, the unwilling, and the opposed. And each has a clear agenda. The tragedy for Syria is that it’s just not a common agenda. And here’s why. 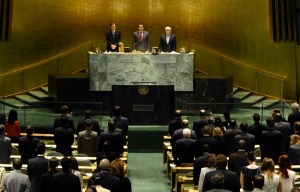 We can dispense with the idea that the United Nations is a consequential player quite quickly. The U.N. is only as strong as its member states, and in this case that means the five permanent members of the Security Council. The U.N.’s relevance in any global emergency occurs either at the front end of a crisis — as a legitimizer of action — or, if the powers that run the place agree, as an implementing arm once they do.

When there’s no consensus, as in the case of Syria, the U.N. is relegated to articulating rather than acting. Enter Kofi Annan, whose six-point initiative was dead before it was born. Not only are the great powers divided, but the gap between the regime and the opposition is a galactic one that renders any diplomatic approach — either on confidence-builders or on an end game — pointless. The fact that the former secretary-general is trying to expand his contact group to include the Iranians has only added to the confusion, allowing the Russians (who have adopted the idea) to avoid any serious action.

Vladimir Putin’s motives on Syria are a mix of principle, pragmatism, and his own persona.  Like Howard Beale, the frustrated anchor in the movie Network, Putin’s mad as hell and he ain’t gonna to take it anymore. No more Western interventions. No more American diktats or schemes to crowd out Russian influence. There’s nothing more insufferable than the leader of a great power that isn’t so great anymore (see: France).

Russia has seen all of its former friends — Saddam Hussein, Muammar al-Qaddafi, and now Bashar al-Assad — undermined and deposed by the Americans. We even want his help to squeeze the Iranians on the nuclear issue, too. And he’s pushing back. He knows Assad can’t be saved and doesn’t want Russia identified with massacres, but he wants to avoid a made-in-America settlement that puts Barack Obama in the driver’s seat or leads to a post-Assad era where Russia has no influence or, worse, is holding Washington’s coat.

Putin also fears — genuinely, I think — a post-Assad Syria dominated by radical Sunnis. He doesn’t trust the Saudis, who are looking to counter Iran and the Shia. He worries about his own Muslims in the North Caucasus. (Indeed, Saudi support for Chechnyan rebel Wahhabists is a painful reminder of the Quran’s long reach.) Finally, as with Nicolas Sarkozy, all life for Putin begins with the personal. Putin is both entitled and insecure — a bad combo. He’s just not going to let Obama roll him again after what happened in Libya. If there’s a deal to oust Assad, Russia will have to be central to it.

On paper, you’d think the Turks would have been willing by now to assume a greater leadership role on Syria. Geography, Sunni affinity, and President Recep Tayyip Erdogan’s leadership pretentions in the region would have all argued for much deeper involvement. But leadership requires standing up, and that can make people unhappy, or worse.  The Turks’ “we want to be loved by everybody” approach (minus the Israelis) — represents their preferred soft-power strategy. It’s about adding countries to the Turkish fan club, not subtracting them.

Yes, it’s hard to sit idle while Assad kills fellow Sunnis. But guess what? Everyone else is doing it. Why should Turkey stand up and press for safe zones or military intervention without an Arab consensus? That might anger Iran, the Kurds, and even the Alevis, a minority sect in Turkey that feels persecuted by the Sunni majority. Better to play it safe and watch carefully. Maybe somebody else will take the lead and fix the problem.

Iran and the Saudis

The new Arab-Iranian cold war has been on for some time now. The Syrian crisis has only made it worse. Led by the Saudis, the Sunnis are determined to do what they can to check what they see as rising Iranian and Shia power. I’m sure the Saudis blame the Americans for the Shia government that now sits in Baghdad and for Bahrain, where Washington pressed for reform of in the early days of the Arab Spring, seemingly inattentive to Saudi concerns.

Iraq may be lost, but the game in Syria is still on and the stakes are high. Turning the Shia-affiliated Alawi regime into a Sunni one that can be influenced would be a tremendous victory for the Gulf Arabs. It would weaken the Iranians and break the exaggerated but still very real threat of Shia encirclement — Iran, Syria, Lebanon, and Iraq. And that’s why Riyadh is backing the rebels with money and arms and allowing individual Saudi clerics to sermonize about jihad and encourage non-Syrian foreign fighters to carry it out. This, of course has a potential downside. We saw the blowback in Afghanistan, where Saudi-inspired Wahhabi doctrine motivated a cadre of Arabs to fight first against the Russians and then against the West.

Tehran, on the other hand, is pushing back: propping up the Assads with concessionary oil, money, arms, and whatever the regime can contribute from its own large bag of repressive techniques. The Iranians may be out of touch on some issues, but it’s hard to believe they don’t sense that the bell is tolling for the Assads and for the four-decade-old strategic relationship with Syria. If and when Assad falls, Iran’s window into Lebanon and the Arab-Israeli conflict is going to be much harder to keep open, particularly its key relationship with Hezbollah. But that doesn’t mean Tehran is going to cooperate on keeping Syria quiet and stable. Indeed, the fear of Sunni encirclement will intensify, and Iran will want to meddle even more to keep the pot boiling (see: Iraq). Iran might even cling tighter to its nuclear program to enhance its leverage and own sense of security. 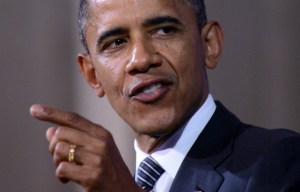 The American agenda on Syria completes the circle. Sure, the president is outraged by Assad’s brutality, and yes he’d like to do more. But bad options and electoral politics provide little incentive or leeway for heroics on Syria. The president is more focused on the perpetuation of the House of Obama than on the fall of the House of Assad. And rightly so. Americans are tired of costly military interventions, and the election is going to turn not on foreign policy but on the economy. And the Republicans can’t find a way to make political hay from an Obama foreign policy that on balance has been smart and competent.

The only issues Americans care about abroad these days are terrorism and high gas prices. The president may pay for the latter but has been very tough on the former. Foreign policy will not help him in November, but a costly stumble abroad could hurt him. And the Syrian crisis offers plenty of opportunities for that. If the president acts, it will be cautiously and in the company of others.

Next month, there will be another Friends of Syria meeting. And most likely, there will be a lot of talk and some ratcheting up of the pressure on Assad, but little else. The only thing that could alter this passivity is a spike in the killing and violence that goes qualitatively beyond the horrors we’ve seen so far. A successful intervention would require a grand concert of powers all focused not just on ending the killing but on creating and nurturing a post-Assad Syria. Right now, the external players are too divided, too self-interested, and too committed to their own narrow concerns for that. Syria may be fixable, but certainly not on the cheap. And nobody’s yet willing to pay the price.

Aaron David Miller, a distinguished fellow at the Wilson Center, served as a State Department Middle East analyst and negotiator in Republican and Democratic administrations. He is the author of The End of Greatness: Why America Can’t Have (and Doesn’t Want) Another Great President. Twitter: @aarondmiller2