How did a phrase initially used dismissively by Joseph Stalin become shorthand for who loves America more?

On the campaign trail, Mitt Romney contrasts his vision of American greatness with what he claims is Barack Obama’s proclivity for apologizing for it. The “president doesn’t have the same feelings about American exceptionalism that we do,” Romney has charged. All countries have their own brand of chest-thumping nationalism, but almost none is as patently universal — even messianic — as this belief in America’s special character and role in the world. While the mission may be centuries old, the phrase only recently entered the political lexicon, after it was first uttered by none other than Joseph Stalin. Today the term is experiencing a resurgence in an age of anxiety about American decline. 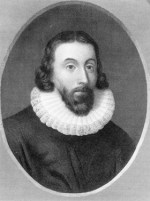 1630
As the Massachusetts Bay Company sets sail from England to the New World, Puritan lawyer John Winthrop urges his fellow passengers on the Arabella to “be as a city upon a hill,” alluding to a phrase from Jesus’s Sermon on the Mount. The colonists must make New England a model for future settlements, he notes, as the “eyes of all people are upon us.”

1776
In “Common Sense,” revolutionary pamphleteer Thomas Paine describes America as a beacon of liberty for the world. “Freedom hath been hunted round the globe,” he explains. “Asia, and Africa, have long expelled her. Europe regards her like a stranger, and England hath given her warning to depart. O! receive the fugitive, and prepare in time an asylum for mankind.”

1840
Reflecting on his travels in the United States in his seminal work, Democracy in America, French intellectual Alexis de Tocqueville writes that the “position of the Americans” is “quite exceptional, and it may be believed that no democratic people will ever be placed in a similar one.”

1898
“There is but a single specialty with us, only one thing that can be called by the wide name ‘American.’ That is the national devotion to ice-water.… I suppose we do stand alone in having a drink that nobody likes but ourselves.” —Mark Twain

1914
U.S. President Woodrow Wilson infuses Paine’s notion of the United States as a bastion of freedom with missionary zeal, arguing that what makes America unique is its duty to spread liberty abroad. “I want you to take these great engines of force out onto the seas like adventurers enlisted for the elevation of the spirit of the human race,” Wilson tells U.S. Naval Academy graduates. “For that is the only distinction that America has.” 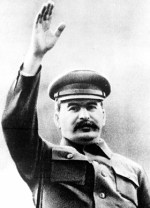 1929-1930
Coining a new term, Soviet leader Joseph Stalin condemns the “heresy of American exceptionalism” while expelling American communist leader Jay Lovestone and his followers from the Communist International for arguing that U.S. capitalism constitutes an exception to Marxism’s universal laws. Within a year, the Communist Party USA has adopted Stalin’s disparaging term. “The storm of the economic crisis in the United States blew down the house of cards of American exceptionalism,” the party declares, gloating about the Great Depression.

1941
Echoing Wilson, magazine publisher Henry Luce urges the United States to enter World War II and exchange isolationism for an “American century” in which it acts as the “powerhouse” of those ideals that are “especially American.”

1950s
A group of American historians — including Daniel Boorstin, Louis Hartz, Richard Hofstadter, and David Potter — argues that the United States forged a “consensus” of liberal values over time that enabled it to sidestep movements such as fascism and socialism. But they question whether this unique national character can be reproduced elsewhere. As Boorstin writes, “nothing could be more un-American than to urge other countries to imitate America.”

1961
President John F. Kennedy suggests that America’s distinctiveness stems from its determination to exemplify and defend freedom all over the world. He invokes Winthrop’s “city upon a hill” and declares: “More than any other people on Earth, we bear burdens and accept risks unprecedented in their size and their duration, not for ourselves alone but for all who wish to be free.”

1975
In a National Affairs essay, “The End of American Exceptionalism,” sociologist Daniel Bell gives voice to growing skepticism in academia about the concept in the wake of the Vietnam War and the Watergate scandal. “Today,” he writes, “the belief in American exceptionalism has vanished with the end of empire, the weakening of power, the loss of faith in the nation’s future.”

1980
Ronald Reagan counters President Jimmy Carter’s rhetoric about a national “crisis of confidence” with paeans to American greatness during the presidential campaign. “I’ve always believed that this blessed land was set apart in a special way,” Reagan later explains.

1989
The final days of the Cold War raise the prospect that the American model could become the norm, not the exception. “What we may be witnessing is not just the end of the Cold War” but the “end of history as such, that is … the universalization of Western liberal democracy as the final form of human government,” political scientist Francis Fukuyama famously proclaims.

In my mind it was a tall, proud city built on rocks stronger than oceans, wind-swept, God-blessed, and teeming with people of all kinds living in  harmony and peace.” —Ronald Reagan

1996
In a speech justifying NATO’s intervention in Bosnia, President Bill Clinton declares that “America remains the indispensable nation” and that “there are times when America, and only America, can make a difference between war and peace, between freedom and repression.” 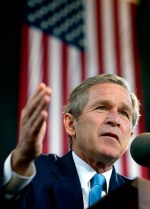 2004
“Like generations before us, we have a calling from beyond the stars to stand for freedom. This is the everlasting dream of America.” —George W. Bush

2007-2008
Amid skepticism about America’s global leadership, fueled by a disastrous war in Iraq and the global financial crisis, Democrat Barack Obama runs against Bush’s muscular “Freedom Agenda” in the election to succeed him. “I believe in American exceptionalism,” Obama says, but not one based on “our military prowess or our economic dominance.” Democratic pollster Mark Penn advises Hillary Clinton to target Obama’s “lack of American roots” in the primary by “explicitly own[ing] ‘American'” in her campaign.

2009
As critical scholarship — such as Godfrey Hodgson’s The Myth of American Exceptionalism — proliferates, Obama becomes the first sitting U.S. president to use the phrase “American exceptionalism” publicly. “I suspect that the Brits believe in British exceptionalism and the Greeks believe in Greek exceptionalism” — a line later much quoted by Republicans eager to prove his disdain for American uniqueness.

2010
80 percent of Americans believe the United States “has a unique character that makes it the greatest country in the world.” But only 58 percent think Obama agrees. —USA Today/Gallup poll

2011-2012
With the presidential race heating up, the phrase gets reduced to a shorthand for “who loves America more.” After making the “case for American greatness” in his 2010 book No Apology, GOP candidate Mitt Romney claims Obama believes “America’s just another nation with a flag.” The president, for his part, invokes Bill Clinton’s “indispensable nation” in his State of the Union address and later declares, in response to Republican critics, “My entire career has been a testimony to American exceptionalism.” If Stalin only knew what he started.

The Coronavirus Could Heal Libya

Sitting in for Boris Johnson, Raab Says He’s Only Part of a ‘Great Team’

Amid Price War, Texas Oil Patch Is Coming Up Empty