The United States doesn't have a monopoly on money in politics.

From the liberal largesse of George Soros to the big-spending ways of Republican financiers like Sheldon Adelson, the 2012 U.S. presidential election is being shaped almost as much by billionaire backers as by the voters and candidates themselves. America's permissive campaign finance laws give these political sugar daddies unique clout (thanks a lot, Citizens United), but it's not a purely American phenomenon. When it comes to behind-the-scenes moneymen, it's a global bull market. 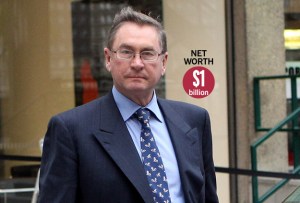 From the liberal largesse of George Soros to the big-spending ways of Republican financiers like Sheldon Adelson, the 2012 U.S. presidential election is being shaped almost as much by billionaire backers as by the voters and candidates themselves. America’s permissive campaign finance laws give these political sugar daddies unique clout (thanks a lot, Citizens United), but it’s not a purely American phenomenon. When it comes to behind-the-scenes moneymen, it’s a global bull market.

A longtime entrepreneur and self-made billionaire who divides his time between Britain and Belize, where he was raised, Lord Ashcroft has been one of the Conservative Party’s largest individual donors since the 1980s and is credited with keeping the party’s finances afloat during the rough post-Thatcher years. A member of the House of Lords, he has bankrolled Tory campaigns in dozens of closely contested constituencies to the tune of some $15 million, helping David Cameron attain the premiership in 2010. Ashcroft, who stepped down as the Tories’ deputy chairman in the months after the elections, when he was accused of avoiding millions of pounds in British taxes on foreign income, says his donations have been motivated by his support for the “Tory principles of free markets and personal liberty.” His political advocacy has not been limited to the British Isles. He also reportedly donated more than $1 million to the People’s United Party in Belize, though the party denies it, while banks he owns in the country have faced allegations of money laundering. And in 2004, he donated at least $750,000 to Australia’s Liberal Party (which is conservative, down under), its largest individual gift at the time. 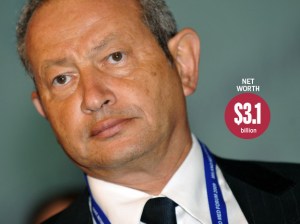 Egypt’s second-richest man — he trails only his brother Nassef — Naguib Sawiris built Orascom into a global telecommunications giant and Egypt’s largest employer, before selling his share to a Russian company this year. Sawiris was reportedly close with Hosni Mubarak’s son Gamal, and some have suggested his cozy relationship with the regime may have helped Orascom dominate Egypt’s cell-phone market. Sawiris, however, has acquired a new taste for democratic politics in post-revolutionary Egypt, co-founding the liberal Free Egyptians Party, which opposes the rise of Islamist groups. (How much he has given is unclear, campaign finance law in Egypt still being something of a work in progress.) The Free Egyptians joined a coalition of secular parties that won 35 seats in the Egyptian parliament’s lower house this year. Sawiris has also stayed active in politics through ONTV, an independent TV network meant to compete with Al Jazeera. In a recent interview, Sawiris — a Coptic Christian who was charged with blasphemy in January for tweeting a picture of Mickey Mouse with an Islamist’s long beard and Minnie Mouse wearing a niqab (the charges were eventually dismissed) — summed up his attitude toward Islamists’ growing influence: “I’m quite fanatic about my scotch in the evening, so I don’t like anybody telling me that I can’t drink.” 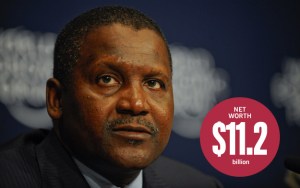 Sub-Saharan Africa’s construction boom has made this cement magnate Africa’s richest man. And Aliko Dangote’s influence in his home country is profound: Dangote Cement alone accounted for 28 percent of the market capitalization of the Nigerian Stock Exchange in 2011. A Los Angeles Times profile compared Dangote to the Russian oligarchs of the 1990s because he built his massive fortune by exploiting his political connections to snatch up state-owned enterprises as they were being privatized in the early 2000s. The connections came along with major political support: Dangote contributed $1.5 million to then-President Olusegun Obasanjo’s 2003 reelection campaign, for example, and shelled out millions of dollars for Obasanjo’s pet projects, including a national mosque and a presidential library. Since Obasanjo left office in 2007, Dangote has spent millions of dollars to support current President Goodluck Jonathan’s efforts to improve secondary education. In 2011, Jonathan’s government returned the favor by naming Dangote a Grand Commander of the Order of the Niger, Nigeria’s highest honor for non-heads of state. Although Dangote’s cozy relationship with Nigeria’s political elite has been criticized, it’s tempered somewhat by the scale of his philanthropy, which includes millions of dollars for education, health, and social causes in several countries. He has denied persistent rumors that he would run for the presidency himself. 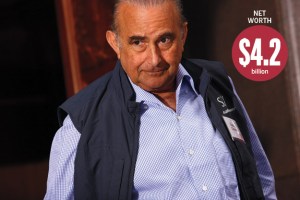 Even with all the money and influence in the world at their disposal, political tycoons don’t always get what they want — and often political conviction can take a back seat to the bottom line. Gustavo Cisneros has been compared to Rupert Murdoch for his clout as Latin America’s leading media tycoon; he also shares the News Corp. boss’s conservative political bent. One of Venezuelan President Hugo Chávez’s most vocal and powerful opponents, Cisneros allowed his Venevisión TV network to attack the president in its news coverage. According to a 2004 WikiLeaked U.S. State Department cable, Cisneros also plotted with U.S. diplomats and Latin American leaders about how to isolate and oppose Chávez — activities that prompted the leftist president to accuse Cisneros of orchestrating the coup that briefly removed him from power in 2002. Things changed after a 2004 meeting between the two men brokered by former U.S. President Jimmy Carter, a friend of Cisneros. The billionaire has since focused more on his international empire, and Venevisión has cut back on its once hard-hitting news coverage. When it does address current events these days, Chávez’s statements tend to get more coverage than opposing voices. Cisneros has been conspicuously silent in the run-up to Venezuela’s presidential election, scheduled for October. Perhaps he’s just betting he can outlast the cancer-stricken El Presidente.

NEW FOR SUBSCRIBERS: Want to read more on this topic or region? Click + to receive email alerts when new stories are published on Politics, Economics, South America, Middle East and North Africa, Africa

China’s Futuristic City Is a Test of Its Planning Power

Xiongan is a window into Xi Jinping’s ambitions.