Was the Arab Spring Worth It?

The people of the Middle East have paid a steep price to overthrow their dictators.

Click here to read more about why geography is destiny for South Asia's troubled heartland.

Last year's Arab revolutions captured the world's imagination as they toppled dictators from Tunis to Sanaa. But what they haven't yet done is make life measurably better for the people throwing off the tyrant's yoke.

Click here to read more about why geography is destiny for South Asia’s troubled heartland.

Last year’s Arab revolutions captured the world’s imagination as they toppled dictators from Tunis to Sanaa. But what they haven’t yet done is make life measurably better for the people throwing off the tyrant’s yoke.

The price of freedom may be incalculable, but it seems equally hard to tally up the very real costs of the so-called Arab Spring. How many have died or been displaced in these conflicts? How have they affected economies and standards of living? Have they made their societies more or less stable? A look at the numbers so far makes for grim accounting: In the four most violent uprisings, in Egypt, Libya, Syria, and Yemen — all four of which slid backward on the Failed States Index for 2012, and likely will again next year — as many as 50,000 people have died since the revolutions began.

Some $20 billion of GDP evaporated last year in Bahrain, Egypt, Libya, Syria, Tunisia, and Yemen, in addition to more than $35 billion in public finances, according to International Monetary Fund data.

But each country will assess the revolutionary toll in its own way. In Libya, clearly the staggering death tally from the civil war dwarfs all other prices. For average Egyptians, growing political tensions and the cratering economy probably outweigh the violence between protesters and security forces. Yemen was well on its way to failed statehood and economic collapse before the Arab Spring, and virtually all indicators are distinctly, and in some cases alarmingly, negative, while the benefits of the protest movement have yet to manifest themselves in any concrete way. In Syria, there is only cost — including thousands of deaths, hundreds of thousands of displacements, and an incipient economic meltdown. The benefits, if any, of the Syrian intifada will only be realized far in the future.

So, was it worth it?

Because most of these dramatic transformations are still playing themselves out, only soothsayers and knaves can give a confident answer. In spite of the ongoing violence and chaos in Libya, there appears to be very little nostalgia for Muammar al-Qaddafi. The same applies to Egypt, where the longing for Hosni Mubarak is still limited to remnants of the former regime. In those countries, where the costs have been very grave, most would say the uprisings were nonetheless worth it — at least for now. The answer is far more complicated in Yemen, where the country’s interlocking crises make it hard to untangle where the chaos began and how it will end.

It is in Syria that the biggest constituency for a “no” is probably to be found. Yet the protest movement, as well as the insurgency that arose to protect it, is not going away. The costs of unseating Bashar al-Assad will be exorbitant in blood and treasure, it is now abundantly clear. But the brutality of the crackdown is inexorably pushing ever larger numbers of Syrians to think that anybody but Assad is a better way to go.

Deaths: According to government figures, at least 846 Egyptians died in the three-week uprising early last year. In subsequent months, at least another 150 have died in violent street clashes.

Deaths: There is no independently verified account of the number of people killed in the Libyan civil war, but the new government claims at least 30,000 people died on both sides. Postwar clashes have killed dozens of others.

Refugees: According to the International Organization for Migration, more than 700,000 people, almost half of them expatriate workers, fled during the civil war, and few have returned.

Economic costs: In 2011, Libya lost as much as 60 percent of its GDP as the value of oil exports fell an estimated 40 percent. GDP is projected to grow at a 76 percent clip this year, with oil production returning to pre-war levels. 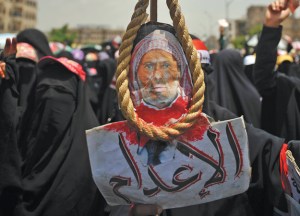 Deaths: Yemen’s government recently estimated that 2,000 people were killed in the uprising leading to Ali Abdullah Saleh’s resignation. Amnesty International’s estimate of 200 people killed during the protests is far smaller.

Economic costs: Before the crisis, the United Nations projected Yemen’s economy would grow 3.4 percent in 2011, but instead it has “shrunk substantially,” with inflation averaging about 20 percent. And it will get worse: The IMF expects Yemen’s GDP to decrease another 0.5 percent in 2012.

Humanitarian crisis: Nearly half a million Yemenis have been displaced from their homes in recent years. Almost 1 million Yemeni children under age 5 face acute malnutrition, with 250,000 at risk of dying. An estimated 55 percent of Yemenis live below the poverty line on less than $2 per day, with 10 million “food insecure” and 5 million of those “severely food insecure.” Youth unemployment is estimated to be more than 50 percent. 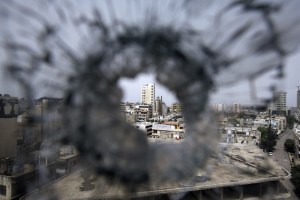 Deaths: The most recent U.N. estimate of civilian deaths in the Syrian uprising, from late March, is more than 9,000. By now that number has likely exceeded 10,000. Opposition groups cite figures closer to 15,000.

Refugees: In May, the U.N. estimated that half a million Syrians had fled their homes during the fighting and that 73,000 had become refugees in neighboring Jordan, Lebanon, and Turkey.

Economic costs: Syria’s currency is in free-fall, inflation is soaring, and exports collapsing. The consultancy Geopolicity estimates that the country had lost more than $6 billion in GDP as of October 2011.

NEW FOR SUBSCRIBERS: Want to read more on this topic or region? Click + to receive email alerts when new stories are published on Geopolitics, Economics, Middle East and North Africa