5 Signs of the Chinese Economic Apocalypse

From hog ratios to growing coal stockpiles, the Chinese economy is blinking red.

The lights are flickering in the world's economic powerhouse.

Although China's outlook may still be positive by, say, European standards, the numbers show that the country's storied growth engine has slipped out of gear. Businesses are taking fewer loans. Manufacturing output has tanked. Interest rates have unexpectedly been cut. Imports are flat. GDP growth projections are down, with some arguing that China might already be in recession. In March, Premier Wen Jiabao put the 2012 growth target at 7.5 percent; then seen as conservative, it's now viewed as prescient. If realized, it would be China's lowest annual growth rate since 1990, when the country faced international isolation after the 1989 Tiananmen Square massacre. 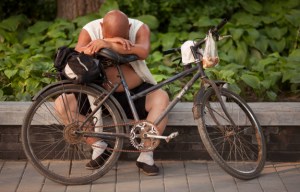 The lights are flickering in the world’s economic powerhouse.

Although China’s outlook may still be positive by, say, European standards, the numbers show that the country’s storied growth engine has slipped out of gear. Businesses are taking fewer loans. Manufacturing output has tanked. Interest rates have unexpectedly been cut. Imports are flat. GDP growth projections are down, with some arguing that China might already be in recession. In March, Premier Wen Jiabao put the 2012 growth target at 7.5 percent; then seen as conservative, it’s now viewed as prescient. If realized, it would be China’s lowest annual growth rate since 1990, when the country faced international isolation after the 1989 Tiananmen Square massacre.

What are the concrete indications that China is experiencing something more than just a spreadsheet slowdown? Here are five real-world signs of China’s economic malaise. 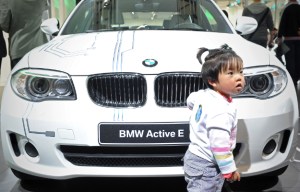 The $586 billion stimulus package that enabled China to sail through the 2009 global downturn only deferred the pain for local governments. Now they’re being asked to repay their debts, and that means some serious belt-tightening at City Hall.

The fleets of flashy cars that local officials indulgently amassed during the boom years will be among the first things to go. The city of Wenzhou is planning to auction off 80 percent of its vehicles this year — that’s 1,300 cars — with similar fire sales occurring nationwide. Even Ferrari is sounding nervous about the Chinese downturn, and not only because Bo Guagua is seemingly off its list of potential customers.

Part of the headache for municipal governments is that land sales have dried up thanks to a central government initiative to cool China’s overheating property market, as well as a shortage of cash and confidence among potential buyers. In June, the average housing price for 100 major Chinese cities rose for the first time in nine months, but prices are still down 1.9 percent from last year. Some government premises could be next on the block, once those official cars have been driven away by their new, private owners. Then the extreme economizing begins: China’s elaborate official banquets could become a lot more prosaic.

Senior government officials have warned for decades that economic slowdown could spell social unrest, and with few exceptions, China’s modern growth rate has been impressive enough to keep most people happy most of the time. But as GDP growth dips below 8 percent for the first time in years, China’s social fabric could come under strain, especially as thousands, if not millions, of migrant workers find their jobs under threat. “It’s clear the slowdown of export growth as a result of weakness in Europe and the U.S. continues to weigh on the Chinese economy,” Lu Ting, an economist at Bank of America Corp. in Hong Kong recently told Bloomberg Businessweek. Exporters are going bust, and some factories that remain open have switched from three shifts to just one.

Migrant workers have always supplied the elbow grease that enables China’s growth engine to purr. But it’s critical to China’s stability that those workers feel they are sharing in the rewards. Their disaffection has the potential to be China’s undoing, as the southern manufacturing town of Shaxi in Guangdong came to realize last week when it became the scene of China’s most recent large “mass incident.” That incident appears to have been contained, but the authorities can only cope with so many Shaxis at once.

When the going gets tough, the rich head to the airport.

Luxury goods sales, which have been booming in China, began to slow earlier this year. But that doesn’t mean that rich Chinese people have stopped spending. They’ve just stopped spending in China. Late last year, it became apparent that many wealthy Chinese were losing confidence in the domestic market, as they began investing in convertible assets, like foreign currency, rather than in fixed assets, such as real estate. Now they are increasingly looking overseas to invest in high-end property, partly because of domestic restrictions and bargains overseas, but also as a hedge against political and economic uncertainty at home. This dovetails with the revelation in late 2011 that over half of China’s millionaires are thinking about skipping the country and setting up permanently abroad.

Chinese prosecutors have said that close to 19,000 officials have been caught in the last 12 years while trying to flee overseas with money earned illegally; they use the term “naked official” for one who has squirreled away an illicit fortune in some overseas bolt-hole, has already safely installed his family there, and is now waiting for the opportune moment to jump China’s listing ship. China’s wealthy and politically powerful are often members of the same family, and if China really does go into recession, a lot of rich people may decide to cut and run. 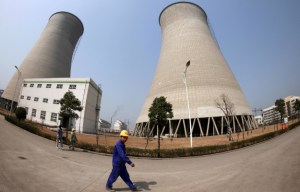 Electricity consumption usually spikes over the summer, as people turn on their air-conditioners to cope with the seasonal heat. But this year, many Chinese appear to be braving the high temperatures to economize. China’s ports are piled high with coal that should be roaring in the country’s power plants. Lower manufacturing output is also to blame. Only last year, Beijing talked about amassing an emergency coal stockpile to prevent the stuff from running out. Now it looks as if China has imported more fuel than it needs, as hard-pressed citizens, businesses, and factories cut their electricity consumption in order to reduce their bills.

The national price of coal has already dropped 10 percent since late last year. This drop could further dent the global economy, which would in turn cool demand for Chinese exports even more. That’s globalization for you: A Chinese person turns off the air-conditioning, and the world economy catches a cold. 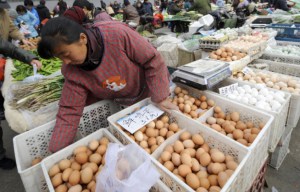 As China consumes ever larger quantities of meat, the prices of pork and beef have risen, fueled by the relentless demand. This has made inflation a preoccupation of Chinese policymakers. By 2007, China was eating 1.7 million pigs every day; in 2011 the country’s National Bureau of Statistics said pork prices had risen 57 percent year on year.

But over the last four months, demand for pork has dipped. The resultant oversupply has caused the all-important hog-to-corn price ratio to fall below the point where rearing pigs becomes profitable, and the Chinese government had to step in and buy up pork to stabilize prices.

Even as the pork price has dropped, the price of eggs has shot up — so quickly that shoppers have started to use the term “rocket eggs.” Furthermore, Chinese consumers, their confidence shaken not only by the faltering economy but by a long string of food safety scandals, are increasingly opting to grow their own fruit and vegetables so that they a) won’t be ripped off, and b) won’t be eating cucumbers pumped full of things that no cucumber should ever be subjected to.

Vice President Xi Jinping is expected to assume China’s presidency in a once-in-a-decade leadership transition this fall. As the cracks appear in his country’s economic foundations, you have to wonder whether he still fancies the job.

Trefor Moss is a Hong Kong-based journalist and a former Asia-Pacific editor at Jane's Defence Weekly. He can be followed on Twitter @Trefor1.
Tags: East Asia, Economics

NEW FOR SUBSCRIBERS: Want to read more on this topic or region? Click + to receive email alerts when new stories are published on Economics, East Asia