Energy independence is in the United States' reach. 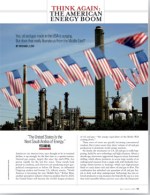 Michael Levi (“Think Again: The American Energy Boom,” July/August 2012) would have better served his readers by urging them to think deeper about energy production. Although the unconventional-energy boom that he discusses is largely concentrated in the United States, it also extends to Canada, where pipeline politics have made it close to impossible to build export pipelines to the Pacific, effectively trapping surging Canadian output in North America. By 2020, U.S. and Canadian output should be sufficient to meet North America’s energy needs, pushing out all other U.S. imports. Canadian oil is hard to refine and will displace similar-quality oil from Venezuela, Mexico, and the Middle East. These producers, in turn, will need either to steeply discount their oil or to reduce production because the United States, with its vast, sophisticated refining system, is virtually the only market for their heavy crudes.

Levi is right in saying that costs are currently high for unconventional North American oil. But he evidently doesn’t understand that high costs bring technological change and innovation, and that historically costs ultimately go down. This is bound to continue to be the case when it comes to North American shale, oil sands, and deepwater output.

Although Levi is right in saying that the oil and gas industry cannot by itself secure prosperity or full employment, it remains the case that relatively low-cost natural gas and relatively abundant oil are, when combined, transformational in boosting energy-intensive industry — from petrochemicals to fertilizers to all sorts of metal fabrication, including steel — to say nothing of the transformational impact that natural gas use can have on the trucking and passenger-vehicle fleet. Energy independence is within reach, and with it a more secure future, a stronger U.S. dollar, and a stronger sense of national security than anyone would have dared dream even five years ago.

Ed Morse has done more than anyone else to identify and draw attention to the boom in U.S. oil production. His letter highlights several important dynamics that are playing out as a result of this most welcome development. None of them, though, undermines the basic claims made in my article. In particular, while Morse is right to flag the possibility that North America might eventually produce as much oil as it consumes, that will not make the United States “energy independent.”

I would be remiss if I did not address the one specific criticism that Morse makes of my arguments. He writes that “[Levi] evidently doesn’t understand that high costs bring technological change and innovation, and that historically costs ultimately go down.” Morse is correct about innovation but mistaken about my beliefs. My article cites current production costs in an effort to explain why new technologies have begun to flourish. It makes no claims about future costs.

That aside, the United States is “dependent” on oil-related events in the Middle East and beyond because disruptions there affect fuel prices here — and rapidly rising fuel prices put the U.S. economy at risk. U.S. policymakers must confront that potential chain reaction every time they contemplate action abroad. New U.S. oil and natural gas production will deliver many things. As Morse notes, it will help energy-dependent industries, delivering as much as a 3 percent boost in GDP over the next decade, according to his group’s research. Moreover, in the case of gas, it could eventually help wean the U.S. transport system off oil.

Still, no serious analyst, Morse included, has claimed that more U.S. production will spare the United States from price volatility in the face of turmoil in the Middle East. Nor has any economist argued that the U.S. economy will be immune to the consequences of volatile prices simply because the United States produces its own oil. Put together, these facts mean that more U.S. production will not make the United States independent. U.S. policymakers will continue to find their hands tied when dealing with oil-producing regions, notably the Middle East, until Americans are able to substantially reduce their oil demand.