Cities of the Future: Made in China

From traffic-jumping buses to electric taxis, China is at the forefront of the world's flashiest urban innovations. 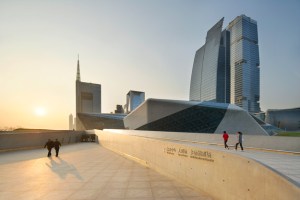 For much of the 20th century, the world looked to American cities for a glimpse of the future. Places like New York and Chicago had the tallest skyscrapers, the newest airports, the fastest highways, and the best electricity grids.

But now, just 12 years into the Asian Century, the city of the future has picked up and moved to China. No less than U.S. Vice President Joe Biden recognized this when he said not long ago, “If I blindfolded Americans and took them into some of the airports or ports in China and then took them to one in any one of your cities, in the middle of the night … and then said, ‘Which one is an American? Which one is in your city in America? And which one’s in China?’ most Americans would say, ‘Well, that great one is in America.’ It’s not.” The speech raised eyebrows among conservative commentators, but it points out the obvious to anyone who has spent time in Beijing, Hong Kong, or Shanghai (or even lesser-known cities like Shenzhen and Dalian, for that matter).

In these cities, visitors arrive at glittering, architecturally arresting airports before being whisked by electric taxis into city centers populated by modular green skyscrapers. In the not-so-distant future, they’ll hop on traffic-straddling buses powered by safe, clean solar panels. With China now spending some $500 billion annually on infrastructure — 9 percent of its GDP, well above the rates in the United States and Europe — and with the country’s population undergoing the largest rural-to-urban migration in human history, the decisions it makes about its cities will affect the future of urban areas everywhere. Want to know where urban technology is going? Take the vice president’s advice and head east. 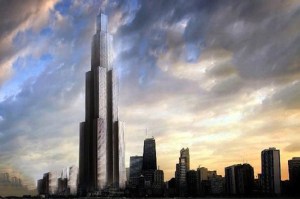 If the speed of China’s rise has been astonishing, it’s about to get even faster. A Chinese construction firm has pioneered a modular construction technique that allows it to build energy-efficient skyscrapers in a matter of weeks, dramatically reducing construction costs and waste. This year, Broad Group will put that approach to the ultimate test when it builds a 220-story skyscraper — to be the world’s tallest — in a mere 90 days in Changsha, in southeast China. (The world’s current tallest building, the more than 160-story Burj Khalifa in Dubai, took six years to complete.)

Although the feat might sound far-fetched, Broad has proved itself capable in a series of trial runs. This past December, it completed a 30-story hotel near its headquarters in Changsha in just 15 days. The approach utilizes prefabrication — 93 percent of the work on the hotel took place in a factory — resulting in 1 percent of the waste of a normal building project. Also, by assembling large portions of the building beforehand, engineers can seamlessly integrate green features into the structure, such as thermal insulation and electricity-generating elevators. Already, Broad says it has franchised its methods to six Chinese companies and is in talks with two companies abroad. 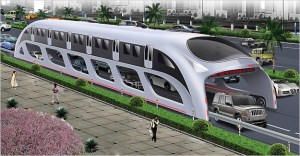 The Chinese bought 14.5 million cars in 2011 — a figure that could increase to 50 million annually within a decade — leading to massive congestion on China’s roads. (A recent jam outside Beijing lasted 11 days.) Given these traffic woes, it’s a wonder someone didn’t think of the 3D Express Coach sooner. The premise is simple: If you can’t go through gridlock, why not slide over it?

Known as the “straddling bus,” the arch-shaped vehicle operates like a game of croquet, but one in which the wickets move over the balls. Developed by Shenzhen Huashi Future Parking Equipment, the bus can carry up to 1,200 passengers in a carriage straddling a two-lane street, allowing traffic below to flow freely (or not, if it’s rush hour). The company claims the vehicle will reduce traffic jams by up to 30 percent, and because it doesn’t require a tunnel or elevated track, it’s 90 percent cheaper to build than a subway or monorail. The bus saves more money by generating electricity through solar panels mounted on its roof and at stops. 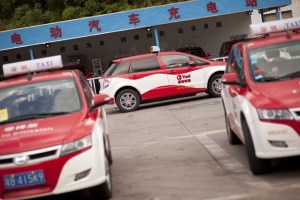 Hoping to become the global leader in electric vehicles, the Chinese government wants 500,000 electric and plug-in hybrid vehicles on China’s roads by 2015, and more than 5 million by 2020. It is already backing these aspirations with a range of subsidies, including up to $8,800 for every electric vehicle purchased by taxi companies and local governments.

As a result, China has more electric taxis in operation than anywhere in the world and is likely to extend its lead. On Beijing’s outskirts, electric Fotons ferry passengers to and from the Great Wall. In the southern city of Shenzhen, which has the world’s largest fleet of zero-carbon taxis and buses, cabbies drive hundreds of e6s, electric cars manufactured by Warren Buffett-backed automaker BYD. Shenzhen’s government wants 24,000 electric vehicles on the city’s roads and 12,750 charging stations by the end of this year. But those plans might have to be put on hold following a fatal crash involving an electric taxi in May — the battery may have been at fault — though safety worries in China rarely get in the way of ambitious government projects. 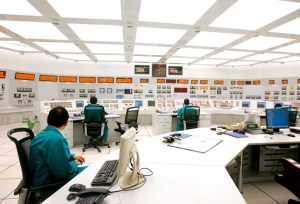 Frustrated by electricity shortages in many of its cities, China is racing to develop nuclear technology fueled by thorium, which some energy experts predict will revolutionize an industry racked by safety concerns following Japan’s Fukushima meltdown in 2011. Compared with the global standard of uranium, thorium is more abundant in nature, doesn’t cause meltdowns, and produces less radioactive waste, making it a more attractive option for filling China’s electricity deficit (though detractors warn that it is untested on a commercial scale and still has significant safety and waste problems).

Ironically, the United States pioneered thorium research during the Cold War before abandoning it in the early 1970s because of its limited use in making weapons. China (along with France, India, and Norway) has now picked up that early research and aims to become a global leader in thorium innovation. China is building 40 percent of the world’s new nuclear plants, and if it masters thorium — work on the country’s first prototype plant is scheduled to be completed as soon as five years from now — the technology is sure to play a major role in the government’s plans to increase its nuclear power supply by 20 times over the next two decades and lessen its dependence on coal. 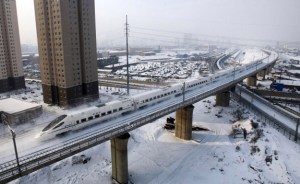 With the world’s longest network of tracks and some of its most advanced trains, China’s high-speed rail system effortlessly evokes the future. But the country’s latest innovation takes unlikely inspiration from the past. Shaped like an ancient Chinese sword, China’s newest bullet train slices through the air at a maximum speed of 311 miles per hour, capable of traveling from Beijing to Shanghai in less than three hours and four-and-a-half times faster than the average speed of trains plying Amtrak’s busy Boston-Washington Acela route (where speeds are limited by conventional train traffic).

In the future, trains like this might also be able to dart from city to city without even having to stop for passengers. Designer Chen Jianjun has dreamed up a system of pods that slide on and off the tops of trains in transit, loading and unloading passengers at high speed without the train actually stopping, which currently adds two-and-a-half hours to the journey from Beijing to Guangzhou. And with China’s rail industry continuing to push the speed envelope — researchers at Southwest Jiaotong University are working on a maglev-style train that shoots passengers through tubes at more than 600 miles per hour — innovations like these might just make air travel a thing of the past. 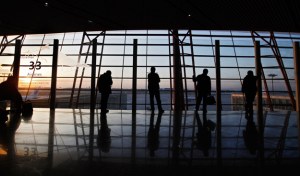 Nowhere is China’s ability to rapidly and efficiently build infrastructure more apparent than in civil aviation. From 2005 to 2010 alone, the Middle Kingdom built 33 airports and renovated or expanded an additional 33, at a cost of nearly $40 billion. This dizzying pace is set to continue over the next three years, when China will build another 70, including a mega-airport in Beijing — the city’s third — that will have as much as double the annual passenger capacity of Atlanta’s Hartsfield-Jackson, currently the world’s busiest.

All this has transformed intercity travel in China, effectively shrinking a country that until recently relied heavily on trains and buses. Airlines are rapidly expanding their domestic networks (though traveler demand has not always kept pace with supply, as evidenced by the $57 million airport built five years ago in Guizhou province, which saw just 151 paying passengers in all of 2009). 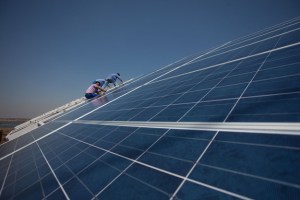 Solar power — by the gigawatt

In 2010, China surpassed the United States to become the world’s largest energy consumer. To meet its seemingly limitless electicity needs, China is turning to its solar industry, which already leads the world in panel production, and gearing up to produce gigantic solar plants.

A solar farm capable of generating 1 gigawatt of power is planned in Datong, a city in Shanxi province known for its coal reserves, while in Inner Mongolia a Chinese firm and an American company have teamed up to build a solar plant capable of cranking out 2 gigawatts, making it the world’s largest, with double the capacity of most active U.S. nuclear reactors. Hong Kong-based China Merchants Group, meanwhile, is building a 500-megawatt solar farm with panels mounted solely on roofs, rather than on the ground, the industry standard. The company will use 32 million square feet of roof space, alleviating concerns about the environmental impact of land-gobbling conventional solar farms.

As China’s major cities swell in size, their residents are creating mountains of waste that ring urban areas, with Beijing alone generating 18,000 tons of garbage every day, enough to fill 29 Rose Bowls each year. In response, Chinese companies are developing cutting-edge recycling technology that could soon render landfills and incinerators obsolete — or at least much less common.

Goldenway Bio-Tech in Beijing has developed a system that can transform up to 400 tons of food waste per day into fertilizer. The odorless process uses a specially manufactured enzyme that breaks down waste in just 10 hours, resulting in a brown powder Goldenway says is ideal for growing organic crops. The company operates 10 such plants throughout China, though it encountered resistance from residents worried about health problems and foul smells when it unveiled plans for a facility in Beijing.