The Midnight's Children author reflects on life under fatwa, the Arab Spring, and his one-night stand with Twitter. 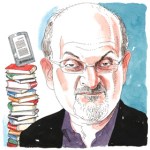 Nearly 25 years after The Satanic Verses, the controversial novel that inspired an Iranian fatwa against his life and forced his family into a decade of hiding, Salman Rushdie seems at ease, even giddy. After all, he’s keeping busy: A movie version of his classic Midnight’s Children and a new memoir about his time in hiding are due out shortly — and he’s even tweeting. But the British-Indian novelist sees dark tidings in the Arab Spring and ruefully recalls better times in the Iran of his youth.

I was very optimistic about Egypt last year because the movement seemed to be genuinely secular, democratic, and not influenced by religious extremism. It seemed to suggest a way for Egypt and states like it to become genuinely modern nations. I think since then, obviously, that’s gone very wrong. One has to say that the Arab Spring is over. The young people who made the uprising were too politically innocent, perhaps. It’s genuinely disappointing that a revolution that had nothing to do with religion and was hostile to the autocratic military command of the state has been followed by a situation in which you still have an autocratic military command and a very religious element now as well. In a way, it’s the opposite of what people were fighting for.

There was one particular and very intimate relationship between myself and Iran — which was that they were trying to kill me. I did once visit Iran when I was 21 years old, during the time of the shah. It was wonderful. I had just graduated from university, and such was the world at that time, 1968, that I was able to drive with a friend from London to South Asia across the world. I mean, try driving across Iran and Afghanistan now! I remember it being a very cosmopolitan, very cultured society. And it always seemed to me that the arrival of Islamic radicalism in that country, of all countries, was particularly tragic because it was so sophisticated a culture — which is not to defend the shah’s regime, which was appalling. But it was one of the tragedies of history that an appalling regime was replaced by a worse one. And let’s hope that isn’t about to happen in Egypt.

If you really look at the world with the long eye of history, now as compared to 200 years ago, the degrees of justice have increased. The age of the great empires is over. Many peoples — including my own country of origin, India — are now determining their own fate instead of having it determined from the outside. But history is one of those rivers that always moves in both directions at the same time. If you look to China, you can argue there hasn’t really been much improvement at all. In much of the Islamic world there’s been a backsliding. And maybe in parts of the United States too.

The expectations were so high when Barack Obama came to power. But anybody who recognized the scale of the problems he had to face knew that he wasn’t going to be able to fulfill everybody’s hopes. I still think he’s changed the narrative of America forever — and frankly, so has Hillary Clinton. The fact that the glass ceiling, both for women and for African-Americans, was destroyed is something that changes the way people think about their futures. And it’s been very pleasurable to watch America being ruled by intelligent people.

I’m on Twitter, but it’s sort of a halfhearted embrace. It’s more of a one-night stand right now; it’s not a marriage.