Putting the Vice Back in Vice President

Mitt Romney's choice of Paul Ryan as his running mate may be controversial. But it's safe to say he's probably less trouble than these five veeps. 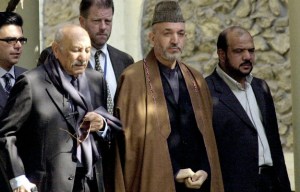 The Tajik former warlord was instrumental in helping allied forces oust the Taliban in 2001 and served for years as President Hamid Karzai’s defense minister, but Karzai’s choice of Mohammad Qasim Fahim as vice president in 2009 raised more than a few eyebrows in Washington. The New York Times reported at the time that the CIA believed Fahim was still closely involved in Afghanistan’s lucrative drug trade and “now had a Soviet-made cargo plane at his disposal that was making flights north to transport heroin through Russia, returning laden with cash.”

This would be particularly worrying if proved true, as Washington was sending millions of dollars in military aid — some of it aimed at combating the drug trade — and U.S. law prohibits sending aid to known drug traffickers. There were also persistent rumors that Fahim had committed human rights abuses during Afghanistan’s civil war. A Human Rights Watch representative described him as “one of the most notorious warlords in the country, with the blood of many Afghans on his hands from the civil war.” Nonetheless, U.S. officials have continued to maintain ties with Fahim, and the vice president attended a meeting with President Barack Obama in Kabul in 2010.

An unreleased report commissioned by Karzai reportedly details the involvement of Fahim — along with a number of other senior Afghan officials — in mass killings during the 1980s and 1990s. The report’s release has been indefinitely delayed, and Fahim reportedly demanded punishment for the official responsible for it, reported telling a cabinet meeting, “We should just shoot 30 holes in his face.”

NEW FOR SUBSCRIBERS: Want to read more on this topic or region? Click + to receive email alerts when new stories are published on Politics, Economics, Afghanistan