Romney criticizes Obama's defense plan, but the real problem is his own running mate.

Since announcing that he was a candidate for president, Governor Romney has continually criticized the Obama administration for what he claims are the president’s severe and unnecessary reductions in defense spending. According to Romney, Obama would make massive cuts in defense spending that could decimate the U.S. military by returning the armed forces to their pre-World War II levels. Romney’s doomsday scenarios have been echoed by conservative commentators like Robert Kagan, Dov Zakheim, Mackenzie Eaglen, Tom Donnelly, and Arthur Herman.

But close analysis reveals not only that these claims are overblown, but that if anyone is responsible for the defense budget failing to keep pace with the increases of the past decade, it is Romney’s own running mate, Paul Ryan.

To see why, it is necessary to go back to early 2008, the last year of the George W. Bush administration. In February 2008, then Secretary of Defense Robert Gates presented an FY 2009 budget request which projected that the defense budget would reach $544 billion in FY 2012. Three years later, in February 2011, President Obama requested $553 billion in defense spending, an increase of $9 billion over what the outgoing Bush administration had said was necessary to provide for the common defense.

While Congress was considering Obama’s request for FY 2012, however, the Republican-controlled House of Representatives, led by Congressman Ryan, refused to raise the debt ceiling unless Obama agreed to the Budget Control Act (BCA). Among other things, this act mandated that President Obama could request “only” $6 trillion in defense spending over the FY 2013-2022 period, $487 billion less than he had projected a year before. Thus, for FY 2013, Obama requested $551 billion for the base defense budget, $3 billion less than he had requested the year before.

To deal with the reductions mandated by the BCA, Obama and the U.S. military leadership developed a new defense strategy that the entire Joint Chiefs of Staff publicly supported in testimony they gave before Congress. But after listening to their testimony, Rep. Ryan said that he did not think “the generals [were] giving us their true advice” regarding the Obama budget. Essentially he accused them of lying — an accusation that General Martin Dempsey, the Chairman of the Joint Chiefs of Staff, said he found personally offensive. Ryan went on to say that Obama’s FY 2013 budget compelled the Pentagon to create a budget-driven strategy, not a strategy-driven budget.

To say the least, Ryan’s comments about Obama’s defense plan were disingenuous, given his central role in bringing about the defense cuts. Ryan not only voted for the BCA, which mandated the cuts in the first place, but, as noted by the Project on Defense Alternatives, his own budget plan called for an FY 2013 defense budget of $554 billion, a mere 0.7 percent difference from Obama’s supposedly “decimating budget.”  Ryan argued that Obama’s defense plan would call into doubt America’s “unquestioned ability to defeat any foe.” But from FY 2014-17 (encompassing Obama’s second or Romney’s first term), Ryan’s own budget plan would spend only $45 billion or 2 percent more on national defense than Obama’s plan. Of course, you won’t hear that on the GOP campaign trail.

However, unlike Obama’s proposal, Ryan’s plan does undermine our national security by slashing the other pillars of our national security, like funds for international affairs. Specifically, Ryan’s budget would cut the international affairs budget from its current level of $47.8 billion to $38.3 billion over the next five years, a nominal reduction of 20 percent and a real reduction of 30 percent. This devastation of the non-military tools of foreign policy goes against the advice of military leaders like Admiral Mike Mullen, the former Chairman of the Joint Chiefs of Staff, who argued that foreign policy is still too dominated by the Department of Defense. To put this in perspective, Ryan’s approximately $10 billion in cuts would equal the entirety of what we spent in 2012 on all diplomatic and consular programs or all international security assistance. The cuts could also be accommodated by completely eliminating USAID — nine times over.  Experts acknowledge that the modern military relies on the regional and linguistic expertise of State Department and USAID personnel for many core missions. Such cooperation would be crippled by Ryan’s budget, further militarizing our foreign policy.

Ryan was hypocritical in voting for the BCA and then criticizing the president and the Pentagon for abiding by it, but that’s not where his responsibility for this impasse ends. Ryan was also a member of the Bowles-Simpson National Commission on Fiscal Responsibility and Reform, which recommended cutting projected defense spending by $973 billion over the next decade, twice the amount mandated by the BCA. Although Ryan did not endorse the Commission’s findings, that was because the final report included new revenues (i.e., tax increases). Ryan never mentioned defense cuts as being problematic. And he has actually criticized Obama for failing to embrace the non-revenue sections of the Commission’s findings. 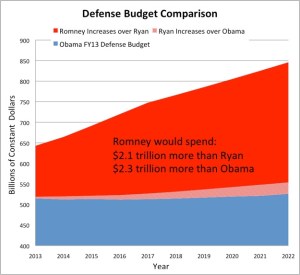 Now, while Rep. Ryan’s plan may seem like a bad idea, it pales in comparison to the vague promises made by Gov. Romney. The Republican presidential candidate has pledged to set the Pentagon base budget (not counting war funding) “at a floor of 4 percent of GDP,” which, adjusting for inflation, would result in $2.3 trillion in added spending over the next decade compared to the plan presented to Congress by the Obama administration — and, interestingly, $2.1 trillion more than Rep. Ryan advocated. Gov. Romney has not elaborated on what specific threats prompt him to call for this huge military buildup, which would take the defense budget, in constant dollars, to levels not seen since the Second World War.