How much military can you buy for $720 billion a year?

Even though the first U.S. presidential debate was not about national security, the military made a brief but striking appearance, with candidate Mitt Romney lamenting what he charged were President Barack Obama’s “dramatic cuts to our military.” He said: “I do not believe in cutting our military. I believe in maintaining the strength of America’s military.” Obama, for his part, countered that Romney wanted “$2 trillion in additional military spending that the military hasn’t asked for.”

The stark contrast raises the question: Is the United States investing adequately for its future defense?

Obama’s long-term plans place defense last among the major priorities of federal government spending. His proposed budgets would shrink the Pentagon’s purse — not just slow the rate of growth. In fact, under Obama’s proposal (even without the mandatory cuts required by the Budget Control Act of 2011), defense would not return to fiscal-year (FY) 2010 spending levels for the entirety of his 10-year budget projection. Even before the Budget Control Act became law, Defense Secretary Leon Panetta reported that defense spending would be reduced by $487 billion over 10 years, with $259 billion of these cuts applied over the next five years.

In contrast, Romney has repeatedly stated that he thinks annual defense spending should rise to about 4 percent of GDP — or about $720 billion a year. In practical terms that would return the Pentagon budget to a little more than what it was in FY 2010, though the 2010 figure includes the cost of fighting in Iraq and Afghanistan, while Romney’s number refers only to base spending. Under Romney’s plan, it looks like for the most part wars cost extra.

Debating whether it would be smart to peg core defense spending (money required for the upkeep and modernization of the force) to GDP has become a cottage industry in Washington. But it’s not clear why it is such a ferocious debate. NATO has long said its member states should spend at least 2 percent of their GDP on defense. Most NATO countries aren’t meeting the target, but no one has really complained that it is an inappropriate guideline. The real question, of course, is, would spending 4 percent on the U.S. military improve American security?

The answer to that question is — like everything pertaining to the Pentagon’s budget — complicated. For starters, there seems to be strong consensus on the right and the left that spending levels won’t matter much unless the services can get spiraling manpower costs under control. According to the Defense Department, overall military manpower costs will rise from roughly $148 billion in FY 2012 to more than $160 bil­lion in FY 2016 — and that’s assuming there are big cuts in the number of troops, as envisioned under sequestration.

Likewise, the left and the right have called for reforms in defense business practices. Within the think-tank community, there’s disagreement over what those reforms should be or how to achieve them, but everyone acknowledges there are smarter ways to do the Pentagon’s business (as opposed to just cutting spending or, arguably worse, layering on more bureaucracy to identify efficiencies). Examples of better business practices might include reforming the military compensation system or implementing performance-based logistics, where industry and the government team to deliver repair parts and services more in the manner of the best practices used in the commercial sector.

Even with a 4 percent solution, a Romney administration would have to tackle these challenges. Otherwise, it would just wind up buying less with more. As for what the Pentagon would do with that money if it got it — well, there are variables at play there, as well. There are three ways worth looking at what a 4 percent investment, sustained over a decade, might deliver. The resultant force can be described in terms of capabilities, missions, and modernization.

The simplest way to project what a 4 percent force might deliver is to look at the planning the Defense Department has already done. Four percent would deliver a bit more than the forces and capabilities the Defense Department described in its 2010 Quadrennial Defense Review (QDR). A mandatory report that has to be delivered to Congress every four years, the QDR is supposed to forecast long-term needs. The report projects the Defense Department’s required levels for the Navy’s fleet size, Army divisions, Air Force wings, and Marine expeditionary units, among other organizational and sizing needs.

In 2010 it did that, though the president jettisoned the QDR’s findings a year later to justify almost $500 billion in defense cuts. And, all this was before Congress added the prospect of additional cuts under sequestration. (The administration itself acknowledges that those additional automatic reductions would severely impact the armed forces. As Secretary Panetta stated: “[Sequestration] would have a devastating effect on not only national defense, but I think on the rest of the country. It’s totally unacceptable, and frankly our political leaders cannot allow it to happen.”)

But even the QDR lowballed real defense needs. A bipartisan independent panel analyzed the report and concluded that it underforecast needs in key areas, such as requirements for combat ships. The panel concluded: “The [U.S.] force structure needs to be increased in a number of areas to counter anti-access challenges, strengthen homeland defense (including defense against cyber threats), and conduct post-conflict stabilization missions. It must also be modernized.” Combining the recommendations of the two reports — the 2010 QDR and the review panel report — gives a realistic description of the level of capability both needed and achievable with 4 percent funding.

Although the administration insists it is not going to cut core capabilities, a few comparisons show there would be some real differences between the punch that could be delivered by Obama’s military and a 4 percent force. 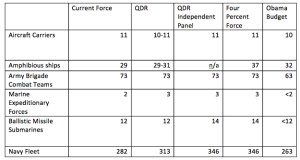 As this chart shows, spending 4 percent of GDP would enable the United States to continue to field 11 aircraft carriers and maintain 14 ballistic missile submarines, among other ships, as opposed to the reductions in the fleet the Obama budget would generate. A 2011 paper by the Heritage Foundation provides additional detail of what one could get by spending $720 billion a year on the Pentagon, including 660 special operations teams, supported by 165 Special Forces-devoted support aircraft. These particular expenditures may not be what Romney has in mind, but at least it shows how the current force could be divided up, restructured, and supplemented to restore U.S. military power under a “4 percent” approach to funding.

Another way to consider what a 4 percent annual investment in the U.S. military would return is to look at the missions it could cover.

As the Heritage report notes, a sufficiently capitalized military could help maintain peace and stability in Asia and keep its commons — air, sea, cyber, and space — free from interference. It would ensure that a hostile power does not exercise hegemony over the Middle East, a key global trade and investment hub as well as a potential source of transnational terrorism and nuclear proliferation. It would support a robust U.S. presence in Europe, reinforcing relationships with top trading partners and NATO allies and enabling the United States to project power quickly and effectively. It would allow the Pentagon to defend the homeland and respond to catastrophic disasters more effectively. And, with 4 percent, the Pentagon could sustain America’s nuclear forces, build more robust missile defenses, and protect its access to space.

The Obama administration would no doubt argue that it can handle these missions under its proposed funding level. But the important point is that it would struggle if it had to put major effort into any two of these missions at once.

Since the end of the Cold War, the United States has measured the fundamental adequacy of its force posture in terms of the ability of U.S. forces, without national mobilization, to defeat two nation-state adversaries in geographically separate theaters nearly simultaneously. In recent years, this has been referred as the two-major-regional-contingency, or “2MRC,” capability.

However, the Obama administration, in its 2012 strategic guidance, acknowledged that the United States would only be able to engage in a second conflict under a two-war scenario to the extent that it could limit the second adversary’s objectives. Essentially, Obama’s strategy states that the United States could win one conflict, but only deter or delay an adversary in the second. The administration’s proposed FY 2013 budget is the first to reflect the impact of the new defense guidance and budget priorities.

Building back to the 2MRC capability would require something like the 4 percent solution. Halting the force-structure cuts proposed under the strategic guidance would require, at a minimum, a return to spending about $703 billion to $710 billion. Further, rather than flattening out in FY 2013 to FY 2017, future defense budgets would have to grow.

One of the U.S. military’s biggest challenges is buying new materiel and replacing aging fleets of aircraft, ships, and land-combat vehicles. Four percent would also provide room for robust research and development and procurement. The Pentagon could reach the Navy’s objective of 313 ships (buying more amphibious ships and submarines than currently projected), ramping up the deployment of the F-35 (and perhaps restarting the F-22, as Romney has suggested), and modernizing the nuclear arsenal.

Of course, the Romney team would have to make its own decisions on what to invest. But here is an illustrative decision of the kinds of cuts that could be reversed under the 4 percent solution. 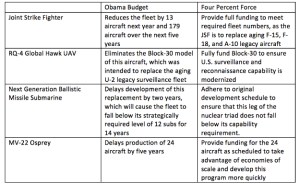 No matter who is president in January, he could not spend 4 percent of GDP on core defense in 2013, even if he wanted to. The U.S. industrial base and the armed services themselves could not respond fast enough. There would have to be an on-ramp with spending growing over time, but at least the scheduled cuts could be stopped, so that readiness and force capabilities don’t deteriorate further.

Should the president decide to pursue a 4 percent defense budget, he would also have to figure out how to pay for it without ballooning the debt or jacking up taxes. (A large tax hike would drive the economy back into recession.) So he would simultaneously have to tackle tax reform, rein in other discretionary spending, seriously reform entitlement programs, and promote economic growth. The net effect would be to ramp up defense spending to its normal (post-World War II) level while imposing some much-needed discipline on the rest of government spending.