That aren't about Jesus or babies.

The Sept. 20, 1943 cover shows a tired looking Hitler, and taunts him with the question "Little Man, What Now?" The Axis and Allied powers had been fighting for control of continent, and American troops were buoyed after the Italian surrender on Sept. 8 to Gen. Dwight Eisenhower. Americans had landed in Italy, pushing inland to meet up with British forces, and German troops were beginning to lose ground. The question on the cover was taken from the name of a German book published in 1932 about the last days of the Weimar Republic. 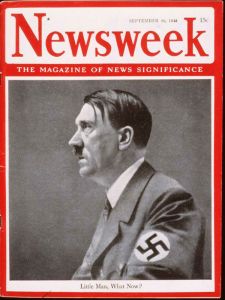 The Sept. 20, 1943 cover shows a tired looking Hitler, and taunts him with the question “Little Man, What Now?” The Axis and Allied powers had been fighting for control of continent, and American troops were buoyed after the Italian surrender on Sept. 8 to Gen. Dwight Eisenhower. Americans had landed in Italy, pushing inland to meet up with British forces, and German troops were beginning to lose ground. The question on the cover was taken from the name of a German book published in 1932 about the last days of the Weimar Republic.

This 1942 cover shows a Rosie the Riveter-type figure sending Emperor Hirohito a Christmas present, in the form of a chubby-looking bomb wrapped in a red ribbon. The instructions? “RUSH.” But the unwelcome present would be somewhat delayed in its arrival: in 1942, the U.S. had no bases in the Pacific from which to conduct bombing runs. No serious aerial campaigns were conducted on Japan until 1944, and of course, the atomic bombs were not dropped until 1945 — three years after the cover went to print.

This cover shows the burial of one of the 11 Israeli athletes taken hostage by Palestinians and eventually killed during the 1972 Summer Olympics in Munich, when a botched rescue attempt at the German airport resulted in a firefight. The kidnapping saw competition suspended for the first time in modern Olympic history. Israel retaliated via assassinations, a response dubbed “Operation Wrath of God.”

In a special report in the spring of 1984, Newsweek declared Europe’s future “uncertain.” Its economy was stagnating; it was losing the technology battle to the U.S. and Japan. And “its best hope for unity — the Common Market — appears on the verge of collapse.” Sound familiar? Newsweek‘s 30-year-old predictions may reassure those disheartened by the current bearishness surrounding the European project today: the Common Market did not collapse, and eventually transformed into the European Union.

The Nov. 1978 cover shows a weary-looking Mohammad Reza Shah Pahlavi, a few months before he would be overthrown in the Iranian Revolution. The shah’s policies of modernization and secularization and begun costing him the support of the Shiite clergy, and his policies of political repression had begun generating opposition among other Iranian groups. Anti-shah demonstrations had started in the fall of 1977, and by January of 1979, the shah was forced to flee Iran. Soon after, the country was declared an Islamic Republic. 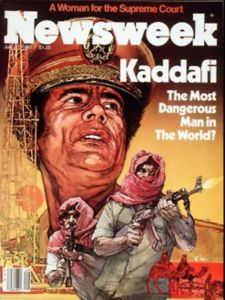 When Newsweek slapped Muammar al-Qaddafi with the label “Most Dangerous Man in the World” in June 1981, the Libyan dictator was just getting started. He had already been funding revolutionary movements as far away as Northern Ireland and the Philippines through Libya’s oil revenues. But it was the 1986 Libya-orchestrated bombing of a dance hall in West Berlin and  the December 1988 bombing of Pan Am Flight 103 over Lockerbie, Scotland, that sealed Qaddafi’s reputation as the bogeyman of his era. 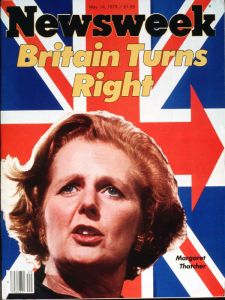 Margaret Thatcher wasn’t just the first woman leader of the Tory party, she was inexperienced as well — the only major post she’d ever held previously was education secretary. But she silenced any doubts when the conservatives swept Parliament in the 1979 landslide election, on a platform of lower taxes, lower public expenditures, and promises to fight back against the unions. Former Liberal leader Jeremy Thorpe proclaimed himself “horrified” after her victory, saying Thatcher “makes [her predecessor] Ted Heath look like a moderate.” Indeed, the Thatcher years would change Britain forever, privatizing housing and industry and bringing Britain closer to the United States, thanks to the personal warmth between Thatcher and President Ronald Reagan.

Over the course of 1989, the borders of the German Democratic Republic had grown more porous, with the stream of East Germans fleeing for the West through Hungary increasing by the month. Still, when it was announced — mistakenly, it was later revealed — on Nov. 9 that the German Democratic Republic was, in fact, opening its borders, the response was overwhelming. East German citizens rushed to the wall, were greeted by those in the West, and suddenly Berliners from both sides were dancing together on top of the barrier while the world watched in astonishment. The infamous wall, and the joyous spontaneity of the day it fell, have since become a symbol of peaceful liberation. 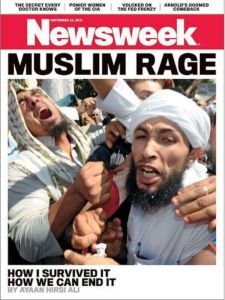 In the wake of protests across the Arab World over a video mocking the Prophet Muhammad, Newsweek ran a story by Ayaan Hirsi Ali, in which she explained to Western readers how to handle the phenomenon she dubbed “Muslim Rage.” The cover showed three Muslim men at what appeared to be a protest. While Newsweek defended the cover, it was widely panned as inflammatory and simplistic, particularly online where an attempt by the magazine to spark a discussion through use of the hashtag #MuslimRage instead mostly led to parody.

Alicia P.Q. Wittmeyer is the Europe editor at Foreign Policy. Her work has appeared in the Los Angeles Times, the Washington Post, and Forbes, among other places. She holds a bachelor’s degree from the University of California, Berkeley, and master’s degrees from Peking University and the London School of Economics. The P.Q. stands for Ping-Quon. Twitter: @APQW