Clicking This Will Make You Stupider 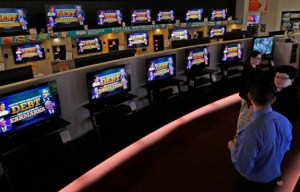 We know — it’s late October, and you’re sick and tired of campaign advertising. But the 2012 election is entering its final weeks, and that means over-the-top political messaging is in full bloom. This week, for example, Citizens Against Government Waste and the Americans for Prosperity Foundation are re-airing a famous 2010 ad in which a Chinese professor lectures his students in 2030 about how bailouts, Obamacare, and the deficit condemned the once-great United States to the ash heap of history. Meanwhile, on the fringes of the national conversation, the peacenik Libertarian candidate Gary Johnson came out with an ad featuring what looks to be a Predator drone and the lines, “Right now in Iran a lot of little kids are about to die.” (Never mind that no one is actually suggesting the United States is conducting drone strikes in Iran.)

Sure, international affairs hasn’t featured as prominently as economic issues in presidential and congressional campaign spots this year. But when foreign policy has entered the ad wars, candidates and their support groups have often played up the fear-mongering and played down the facts. Here are some of the most bizarre, egregious, and entertaining examples.

First there was Rick Santorum’s Obamaville ad, which took viewers on a tour of a dystopian future America menaced by a nuclear Iran (in what some interpreted as a subliminal message, President Obama appears for a split second on a television screen flashing images of Iranian President Mahmoud Ahmadinejad). Now Newt Gingrich’s Super PAC, Winning Our Future, is out with an ad that paints an even more dire picture if Obama wins reelection. With the help of soaring music and apocalyptic images, we’re told that by 2016 the Middle East will burst into flames, Iran will go nuclear, and gas will be rationed. Never mind that four years into Obama’s presidency, the world has yet to end. He’ll have more flexibility in a second term, people.

Conventional wisdom says that studying abroad in Europe will make you a radical, U.N.-loving environmentalist, but what fewer people know is that it’s also associated with rowdy, ice-luge Jägermeister shots and corn-dog “triple doubling.” Luckily, the South Dakota GOP has put together a television ad explaining how this happened to Democratic congressional candidate Matt Varilek. While he was off accumulating graduate degrees at Glasgow and Cambridge — that bastion of subversive radicalism that produced Stanley Baldwin and Prince Charles — Republican candidate Kristi Noem was at home raising a family on her South Dakota farm and serving “her friends and neighbors” in the state legislature. The choice for voters on Nov. 6: “radical ideas” or “South Dakota common sense” (Varilek is already fundraising off the ad).

Playing off of Obama’s call for economic patriotism, the labor-backed Super PAC Workers’ Voice released an ad and accompanying website this week that accuses Mitt Romney of being an “economic traitor.” In the spot, which seizes on the controversy surrounding Bain Capital’s decision to outsource jobs at a company called Sensata Technologies to China, a Sensata employee explains that when Chinese executives visited his plant in Illinois, Bain ordered the staff to take down the American flag. (Obama campaign ads have also made questionable claims about Romney shipping jobs to China through Bain.) Romney does have holdings in Sensata, but Bain bought the company in 2006, four years after the GOP candidate left Bain Capital. That’s some shaky ground on which to build the case that Romney is an economic Benedict Arnold.

Rep. Allen West (R-FL) is no stranger to controversy. So perhaps it’s not surprising that the retired lieutenant colonel, who once called Obama supporters a “threat to the gene pool,” has released one of the most provocative campaign ads of the election season. Filmed in the style of CSI Miami, the spot casts the freshman congressman as a war hero readying for battle as his opponent, Patrick Murphy, drunkenly assaults a police officer in South Beach and is taken into custody. “Two men. A country in crisis,” the narrator says ominously in closing. “You decide.” The ad wins extra points for its liberal use of Murphy’s mug shot and brazen portrayal of West’s military career, which ended in ignominy after he pled guilty to assaulting a detainee during an investigation in Iraq. West was stripped of his command and forced to pay a $5,000 fine.

Romney’s favored line about Obama’s supposed “apology tour” makes a comeback in this ad, despite having been thoroughly debunked by an army (though not a shrunken navy) of fact-checkers, including PolitiFact, FactCheck.org, and the Washington Post, which awarded the claim four “Pinocchios.” The “apology tour” first entered the political vernacular when Karl Rove wrote about the president’s “international confession tour” in the Wall Street Journal back in 2009. But even Rove’s best efforts to slice and dice Obama’s speeches that spring did not yield the word “apology” — or even a convincing case for the president’s contrition about America’s past. But here, again, we have Romney accusing Obama of “going on an apology tour of going to various nations and criticizing America.” Not only that, the ad, which was released by the Romney-Ryan campaign after the last debate, sneakily suggests the “apology tour” occurred in the Middle East, where the president “flew to Egypt and to Saudi Arabia and to Turkey and Iraq. And, by the way…skipped Israel.” The only problem is that the tour Rove analyzed — on which Obama never apologized — stopped in Paris, London, and Prague.

The average American believes the federal government forks over roughly a quarter of its annual budget to other countries in the form of foreign aid. In poll after poll, Americans say that Washington’s global welfare system costs more than the Pentagon and ought to be trimmed back — to something closer to 10 percent of the budget. (Foreign aid actually makes up about 1 percent of federal spending, but that doesn’t make it any less lethal on the campaign trail.) This scathing attack by Rep. Rand Paul’s political action committee on Sen. Joe Manchin (D-WV) is betting that voters in the Mountain State are at least as misinformed as the average American. “While our debt climbs higher and our roads and bridges crumble, Joe Manchin works with Barack Obama to send billions of our taxpayer dollars to countries where radicals storm our embassies, burn our flag, and kill our diplomats,” the narrator intones. First on the chopping block, according to Rand PAC, should be assistance to Egypt, Libya, and Pakistan. Of course, the ad leaves unexplored what would happen if the nuclear-armed and al Qaeda-infested demographic time bomb that is Pakistan went bankrupt or if the Egyptian military decided it wanted to dissolve the country’s peace treaty with Israel — something 77 percent of Egyptians supported in a recent poll.

Ahead of the foreign-policy debate on Monday, the Obama campaign released an ad suggesting that Romney had a five-point plan for foreign policy as well: fudge facts, alienate allies, admit inexperience, consult neocons, and misidentify enemies. It’s not as misleading as some of the other ads on this list, but it is short on context (yes, Romney said that America’s “number one geopolitical foe” was Russia, but he labeled Iran the “greatest threat that the world faces” in the same interview). The ad also pokes fun of Romney for speaking French while promoting the Salt Lake City Olympics — an attack straight out of the Newt Gingrich playbook.

In September, shortly after the attack on the U.S. Embassy in Cairo, the conservative group Let Freedom Ring released a highly deceptive ad denouncing Obama for inviting Egypt’s Muslim Brotherhood to the White House and sending Cairo $1.5 billion in foreign aid. (A more recent ad by the group Secure America Now condemns the administration for investing millions in Egypt rather than U.S. schools.) The ad begins by showing a fiery speaker pledging to establish a capital in Jerusalem at what the narrator describes as a “Muslim Brotherhood rally for their new Egyptian President Mohamed Morsy.” But what the narrator doesn’t mention is that the speaker is the Egyptian cleric Safwat Higazi, not Morsy. To support the claim that the new Egyptian leader wants to revive relations with Tehran, the ad references a Reuters report on an interview with an Iranian news agency that Morsy denies giving. And not only does the narrator make the contentious claim that Iran is “building nuclear weapons,” but she cites a line from a 1991 memorandum for the Brotherhood’s North American wing to prove that the group’s “top leaders” are interested in “taking over America.”

Obama may have taken a bit of right-wing heat for criticizing Romney’s Big Bird comments on the campaign trail and in a campaign spot, but the Super PAC American Bridge 21st Century wins the award for the most gratuitous use of Big Bird in an anti-Romney ad. After criticizing the Republican candidate for stashing his money away in Switzerland and in the Cayman Islands, the ad inexplicably cuts to Romney’s remarks about cutting funding to PBS as what appears to be an anvil smashes Big Bird, sending yellow feathers flying everywhere. The unanswered question, of course, is what happens to Mr. Snuffleupagus if Big Bird’s not around?

Where to begin? This ad, released by the super PACs Secure America Now and RightChange, takes the Obama administration to task for not recognizing more quickly that al Qaeda was behind the deadly consular attack in Benghazi on September 11. To identify the perpetrator, the narrator chastises, the president “only needed to look at the al Qaeda flag desecrating our ground.” On screen, a black flag can be seen waving amid billowing smoke — except the footage was clearly taken at the U.S. Embassy in Tunis, some 650 miles away. Elsewhere, the ad features a second “al Qaeda” flag — actually a similar flag that is common among Salafis throughout the region — again implying that it was located in Benghazi. Upon closer examination, however, it’s the flag that soccer hooligans hoisted over the U.S. Embassy in Cairo — hardly the damning Libya evidence the ad’s makers are suggesting. The ad’s final message: “Just tell me the truth. What happened?” We might ask the producers the same thing.